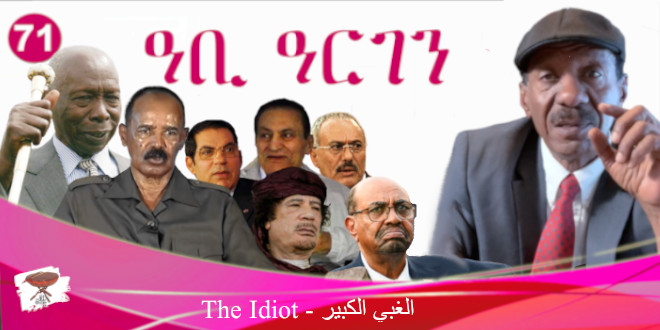 [This is the source for the script of Negarit 71, my Youtube channel]

Zen Alabdeen of Tunisia, Mubarek of Egypt, Ghadaffi of Libya, Ali Saleh of Yemen and Al Bashir of Sudan.

Daniel Arap Moi the only one among those on the poster who left office peacefully. Eritrea is still under the grip of Isaias, the rest were forced out of office. The Tunisian fled his country and lives in Saudi Arabia, Gaddafi and Al Saleh died violently, Mubarek escaped death because of old age and now he lives under house arrest. And finally, Sudan’s government has declared it will hand over Al Bashir to the International Court to be tried for genocide.

Children imitate their parents, their neighbors, their teachers and leaders. And in the absence of a culture of critical thinking in any country, the oppressed people are discouraged from owning their views, instead, they adopt views imposed on them.

Where people are overwhelmed by violence, they become violent. However, where there is a solid foundation of humanity, antipathy is shunned, and the people become compassionate. Briefly, human beings are a product of their upbringing and environment. For instance, how many times have you seen mating dogs being beaten up savagely? How many times have you seen animals treated cruelly? If that behavior is not deterred, it is normalized, and the victims of oppression become creative in taking the cruelty to the next level.

Sadly, corrupt leaders are able to corrupt even the most civilized cultures. An arrogant, stubborn leader becomes an example to emulate. His character is adopted by many supporters and devotees.

For the last thirty years, the self-proclaimed Eritrean leader distributed blame to everyone but himself. He is very skilled in finding scapegoats, individuals or entities, to blame for all the miseries and misfortunes of Eritrea.

Many of you know the despicable tradition of keeping a concubine (Wshuma) and we know how these poor victims of society are treated like disposable objects. Unfortunately, some victims consider the disrespect and mistreatments as a right that every man is entitled to. Imagine growing in a house in which the mother and her children live under the mercy of a vagabond husband. Naturally, the young children register what they observe, but they are too young to do anything about it. However, had they been adults, would they allow the man to mistreat their mother?

Loyal and respectful children would certainly not tolerate it and they will stop the abusive man… that is if they do not harm him badly. Eritrea has a Wshuma known as Abi Argen who is not married to her in the usual customarily accepted ways.  Isaias has become Eritrea’s Wshuma and the children couldn’t stop him from abusing their mother so far.

The reason could be that Eritreans have internalized the humiliating abuse they witnessed and it has become their mortal weakness. Maybe they are anxious of what might follow as a result of them challenging the abusive man. But I hope the new wave of Eritreans will not see that and turn their faces to the other side. They seem to be ignoring the situation and convincing themselves it’s not happening, it’s not real!

Watching some news a few years ago, I saw an Eritrean refugee boldly arguing with a policeman who was arresting illegal immigrants. The refugee was almost spewing flames, telling the policeman, “I have rights, you cannot arrest me!” The policeman was obviously afraid of breaking any law and remained gentle. But the refugee was so loud, defiant, and disrespectful to the policeman. that surprised me a lot.

A few days later I met a newly arrived refugee and we were talking about the situation in Eritrea. I told them what I watched–about refugee I saw on TV who kept repeating, “my right, our rights,” etc. I asked them, you were in Eritrea among your peers, all of you physically able to take any action to correct what was wrong and make it right; you were armed, and among a formidable force, with your colleagues who were equally armed; why didn’t you fight for your rights then? The answer of one of them told me: “Oh Saleh, we didn’t have the concept of RIGHTS until we left Eritrea!”

I was shocked and sad! What have they done to Eritrea! An Eritrean who lacks an understanding of the concept of rights! It didn’t occur to me until then. That is what’s called the influence of the culture and politics of the surrounding environment. Since 1991, children were taught the regime is only a levels below God, other times, it’s on the same pedestal with God. Defying it is akin to defying Eritrea. Defying its leader is similar to defying God.

During the last three decades, the system has been relentlessly establishing a cult mentality in the minds of the young. And I believe that is the reason why, so far, the people have not entertained a serious move against the abusive regime.

Over the last few days, Eritreans who are anxious about the state of affairs in their country awaited Isaias’ interview and then listened to the entire boring, demoralizing, and despicable monologue—all the two parts totaling more than three hours. Isaias’ mentality has not changed since his first public speech at Cinema Impero when a citizen appealed to him to help with the skyrocketing utility prices, mainly electricity and water. Isaias angrily replied: do you expect us to slaughter a goat for you every Sunday! Later on, he made another similar speech in Washington DC, where he repeated the street language and insulted his audience. Thirty years later, nothing has changed. He still disrespects and insults the intelligence of Eritreans. And nothing will change in him, “amel ms megnez”—habits die hard.

Are Eritrean willing to let Isaias satiate his insatiable thirst for bloodshed indefinitely? Do you see how he is sniffing violence and contemplating yet another war? Didn’t Eritreans already provide tens of thousands of sacrificial lambs to satisfy his adventures?

There is a famous saying in Homer’s Illiad written about 1000 years BC: “For once deceived, was his; but twice were mine.”  The  modern version of it goes, “Fool, me once shame on you, fool me twice, shame on me …” Eritreans have been fooled tens of times, a never-ending cycle of deceit that has been running for three decades. That should be a valid reason to scream, YIAKL! ENOUGH!

Net time anyone takes a stroll down the streets of Eritrea, please observe how many amputated veterans you see. Then think, why their limbs are amputated! No doubt, mostly it was to save the body, not because they wished to get rid of their limbs. It was mostly the decision of the doctors who gave up on saving the limbs, and were afraid if not amputated, the wounded limbs would kill the body. For those who have some love your people, and for humanity, remember Eritrea is in that situation: whether to keep a festering wound in its body and risk killing the entire country, or rid it of its sick limb.

Isaias is fond of lecturing people on how expensive consumer goods are just to gain the sympathy of the poor. He lists all the economic destruction through which he led the country, but would never realize, let alone admit, that it all happened under his watch. It’s his tactic of showing sympathy for the poor, yet doing nothing about it. For example, if not the entire country, why can’t the capital city have running water 30 years after liberation? How does one develop an economy if the circulation of money is limited and he insists on keeping the people’s money in his party vaults as if it is a dangerous item, as if it is a stash of illegal bullets and bombs? Is a Samsonite briefcase full of hard currency insignificant? How many of villages and towns will receive some of their children carrying Somsonites if there was a conducive business environment in Eritrea? Why does he underestimate the financial capabilities of Eritreans? Is know how not a resource that can be invested?

This time, he threw red meat (to salivate the mouths) to the destitute people in the form of promises of salary increase, or economic boom. AS usual, it will not find ears to penetrate. He has made make-believe rosy forecasts many times before only to pursue policies that smashes the little hope left among the people. They cannot be fooled repeatedly. It’s time he realized he has robbed Eritrea of hundreds of thousands of her children’s lives. He has broken families, emptied the country of its youth, and closed the doors of hope in the face of its bright educated citizens. He has blocked the way preventing business people and entrepreneurs from helping their country to thrive. His hobby is to keep the dark cloud looming over the country and to deny it a normal dignified life.

Eager Eritreans, who went to Eritrea to establish businesses, were discouraged and pushed out never to return again—now we see many of them flourishing in many African countries–from Angola to Uganda, Kenya, and Sudan.

Unfortunately, on Independence Day, the regime entered Asmara under the leadership of Isaias, leaving the mountains behind, but he never adopted to the civil life, and never transformed himself from a guerrilla leader into a civil leader. Instead he brought the battlefield mentality along and imposed it on the civilian life. And that is what ails Eritrea exposing and how it is being pushed towards more suffering to this day.

Finally, as I said last time, the rooster will finally crow; but it is up to the carrying Eritreans to summon the rooster that is banned from Eritrea. Don’t despair, Eritrea will be normal again, it will receive its children, its diverse political outlook, and its hardworking and wealthy entrepreneurs, its doctors, its engineers, and its professors. It will become a just, peaceful, and prosperous country. But we must usher the rooster to the highest hill in Eritrea and listen to it crow.