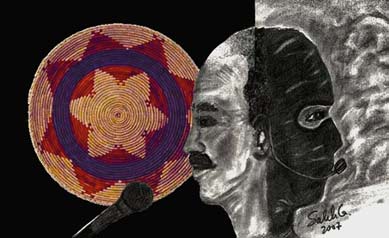 This edition of Negarit was about to be published when the tragic events in Libya, and then the Mediterranean Sea overwhelmed us. I delayed it for a few days to give people time to mourn. Here, I would like to commend the Ethiopian government for handling the Libya massacre case responsibly, and  the Ethiopian people for staying together in facing the tragedy.

At the outset, let me remind you of the way a traditional straw plate is made.

Starting from a point in space, a strand of straw swirls to the outside and stops only after the weaver is satisfied with the size. The curling strand gives the illusion that the plate is made of many circles when in reality it is a single, long strand of straw that curls around itself.

If you put your finger in the center and move it counterclockwise over the strand, you get the illusion that the circle is getting bigger and bigger until your finger reaches the edge. If you move your finger clockwise on the same strand, you end up pointing to the center. The weaver decides the size of the plate: if it is too big, it becomes redundant, if it is too small, it is less useful. The secret is to have a plate big enough to hold a full bread, Injera, if you like. I discovered that the straw plate is a perfect compass for our regional politics.

Problems are local, but as they get bigger, they cover bigger areas, just like the strand of the straw plate, and they are not local anymore.

Is the existence of IS a local problem? A year or so ago, most people would have answered in the negative because IS was an Iraqi and Syrian problem–no one would have imagined what IS did will impact our region this close. It has. This is probably a good time to put our finger in the center, follow the strand, and move to the outside. Politics is not local anymore; I will put my finger in the center, in Eritrea, because only then I can go to other places. Ethiopia, for example!

There is a contentious issue over which Eritreans have been bickering for the last 15 or so years; debates over the role of Ethiopia in the current affairs of Eritrea has paralyzed the justice camp. At the heart of the debate are two issues: 1) The presence of Eritrean opposition groups in Ethiopia, 2) The existence of an oppressive regime in Eritrea.

There are two more legitimate questions that emanate from the above and leads to legitimate debates: Should the Eritrean opposition stay in Ethiopia or not? Are they serving Ethiopian interest or Eritrean interest?

After what they went through, Eritreans should not be outside their country against their will. For decades, hundreds of thousands of citizens have been directly or indirectly banished from their country. Any debate should start from the basic questions: why are so many citizens unable to return to their homeland? Why are so many more leaving?

Unless one answers those questions, anything else is an attempt to trivialize the issue. Unfortunately, some Eritreans who masquerade as “opposition” to the regime have been dwelling on these issues for too long. Many Eritreans are denied the right to live in their country, and some elements masquerading as “opposition” want to deny them the right to live elsewhere. If they did, they must be traitors. That should not even be an issue, but they have an explanation: Ethiopia is an enemy! Then, so is the USA according to Isaias, the Eritrean Janus! Moreover, it follows, if Eritreans opposing the regime from Ethiopia are traitors, then Eritreans opposing the regime from the USA should be equally traitorous. And since the PFDJ considers half the Eritrean population traitors, no one should be required to explain why the regime must be removed. Eritreans have lived, are living, and will continue to live everywhere, particularly in Ethiopia, Sudan and other neighboring countries–hopefully on their own choice, not exiled or as refugees.

It is difficult to discern who is opposing the presence of the opposition in Ethiopia due to genuine concern, believing their presence harms Eritrea, and who is just peddling the PFDJ regime’s position. Who is genuine, and who wants to destroy the opposition to maintain the statuesque?

There is an absurd accusation that the opposition wants to overthrow the PFDJ regime with the support of Ethiopia. First, no Eritrean should be expected to apologize for wanting to remove the oppressive regime. Unfortunately, the Eritrean opposition has no leverage or ability to push a button and make Ethiopia invade Eritrea with the intention of removing the regime. It is also wise and prudent to remember that when Ethiopia penetrated deep inside Eritrea in the last war, no opposition brought it in. It came on its own. And it has done so several times over the last decade. It is occupying chunks of Eritrean territories. The opposition has nothing to do with all of that–the bleeding heart sovereignty people should make the PFDJ accountable for that disaster simply because only the PFDJ is responsible for the Eritrean predicament.

It’s obvious that there are Eritreans who have a soft spot for the PFDJ; they are intolerant of anyone who struggles to see an Eritrea that is free from the PFDJ abuse and its stains. Is misleading and manipulating public opinion by targeting the opposition, while the PFDJ continues to oppress the people, a responsible move? It is a deceitful political move no better than the Ethiophiles’ move to destroy the legacy of the Eritrean struggle.

The above are the issues as I see them. The rest of the noise that is sandwiched in between any of the above positions is an unnecessary fat that has to be removed.

The Eritrean opposition groups in Ethiopia deal with a three headed hydra. I do not think anyone has a definite answer as to whom, among the three heads, handles Eritrean affairs: 1) the so-called Sana’a Forum that in reality is Ethiopia forum, 2) The intelligence agency that has wreaked havoc on the opposition, and 3) The Tigray government that deals with Eritreans as an extension of its militia forces.

There is no clarity of what the Ethiopians want from the opposition. Do they want their country to be the incubator of feeble, undependable, ineffective organizations, some with members not more than a dozen? Sure enough, most of the hallow organizations that were formed by intelligence authorities ended up in chaos. There are many stories that saddens and shames any Eritrean. And the cycle is rotating, still some more.

But why do Eritreans blame the Ethiopian government for their own weaknesses? Why can’t they do it themselves? That sounds a legitimate question or observation, depending on the perspective.

True, that is what many Eritreans are thinking about, simply because the alliance of Eritrean opposition groups with Ethiopia didn’t yield any benefit–neither for the opposition or for Eritrea. It has been a useless undertaking. However, the inability of Eritreans to do it themselves doesn’t absolve the Ethiopians of the damage they have inflicted on the opposition.

Just like in the straw analogy, I know that unlike the PFDJ, the mainstream opposition doesn’t believe in isolation. It does not believe in perpetual enmity and does not believe Ethiopia is an enemy. It is an ally. But they also are apprehensive that the Ethiopian authorities have turned the Eritrean opposition into a retail business, chercharo! Any Eritrean individual or opposition group should seek legitimacy from Eritreans, not from some officer who thinks he is grooming people for his king making projects. That should be an entirely Eritrean affair.

A few weeks ago someone asked me why awate,com described Radio Wegahta as an Ethiopian station–many people also ask about that. I understand because many also Eritreans do not know that Wegahta and Salina are media outlets run by an Ethiopian agency and that they have nothing to do with the Eritrean opposition.

Radio Wegahta used to be in Sudan when its name was Izaat AlSharq and was run by the Sudanese intelligence under the cover of the Sana’a Forum. When Omer AlBashir tied the knot with Isaias Afwerki, alSharq was expelled from Sudan– packed and sent to Ethiopia, where it was reassembled in Mekelle and its name translated into Tigrinya, Wegahta, meaning AlSharq in Arabic, meaning the East in English, meaning the direction of sunrise, meaning Wegahta in Tigrinya! Very few people know the mission and editorial policies of Wegahta, or Salina, or anything bigger that may be in the works.

Ethiopia has the right to have its own radio station beaming to Eritrea,  and it runs Wegahta just like France runs ERENA, just like Germany runs Deutsche Welle, just like the USA runs Voice of America, just like Australia runs SBC. None of these are Eritrean opposition radio stations, they serve the interest of those who founded and fund them. Their engagement in real Eritreans opposition affairs is similar to the engagement of someone carrying a candle to mourn Eritrean victims. And we are guilty as accused: there are Eritrean suckers who couldn’t tell the difference!

There is a serious question: what would the Eritrean opposition groups lose if they packed and closed their offices and left Ethiopia? The answer is in the famous philosophical riddle: “If a tree falls in a forest and no one is around to hear it, does it make a sound?”

Ethiopia is a neighbor and will always be interested in what happens in Eritrea. That explains why it wants to have an impact on the state of the Eritrean opposition. Ethiopia is also an ideal location for the opposition to be. However, what did the opposition gain in its years of stay (I can’t confidently say operations) in Ethiopia? What’s the opposition stationed in Ethiopia doing, that those residing elsewhere cannot do? Nothing.

At times, one needs to take stock and evaluate the situation. In the meantime, we are left on our own, deafened by noises that attack the opposition using the above chaotic situation to promote the statuesque and bail out the PFDJ, for many reasons. These voices are intolerant of anyone outside the PFDJ realm, which they believe is their private legacy that they must keep intact, solely. And that is when the Ethiopian connection becomes a volatile issue. And that is why a group of Eritrean citizens has taken an initiative; they are preparing a document to meet and discuss the vague relations with Ethiopian authorities provided they are willing. The initiators hope to have a clear understanding of the relations to make it productive for both countries.

Finally, lets return back to the straw plate and move our finger from the center, clockwise, following the strand, we will not move our finger too far before we find Ethiopia very close. But careful, we need to tough the curling strand only to see the magnitude, not to tickle emotions.