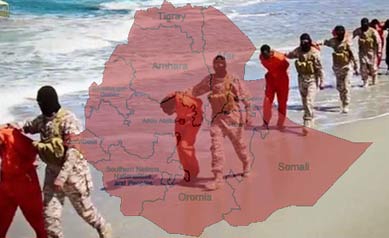 IS Entices AlShabab To Pledge Allegiance

In the early hours of Sunday, a gory 29-minute video showing the execution and slaughter of 28 people appeared on the Internet. By the afternoon, many websites removed the complete gory video and replaced it with shorter clips.

The video production carried the signature of Al Furqan, the media and propaganda arm of IS. The Islamic State For Iraq and Levant (ISIS) is now simply known as Islamic State (IS) after it expanded its reach beyond Iraq and Syria. Currently it has franchises in Sinai, Palestine, Libya, Nigeria, Yemen, Afghanistan, and Pakistan.

IS extremists executed the Ethiopian victims in two groups. The first group of 12 men in bright orange jumpsuits were beheaded in the shores of the Mediterranean Sea, while the second group of 16 men in black jumpsuits were shot at close range in the southern desert of Libya. According to the caption, the first group was behead by the Burqa affiliate and the second group by the Fezzan affiliate of IS.

Apparently the aim of the gruesome video is to bolster AlShabab of Somalia which has yet to pledge allegiance to IS though it has pledged allegiance to AlQaeda. Observers believe that IS wants to lure AlShabab to its fold.

AlShabab considers the Ethiopian government an enemy for its support of the Somali government. And it has been fighting fierce battles against the Ethiopian forces since 2006, and has carried out several attacks inside Ethiopia where civilians were killed.

The caption on the video described the victims as, “worshipers of the cross belonging to the hostile Ethiopian church.”

In February, the Libyan franchise of IS beheaded 21 Egyptian Coptic Christian workers, provoking the Egyptian government to retaliate with airstrikes on Derna, an IS stronghold.

The latest victims of IS are purportedly Ethiopian Christians who happened to be in Libya, the main transit stop for African refugees and migrants on their way to Europe.

For the last ten years, human traffickers operated lucrative business smuggling people to Europe mainly via the Island of Lampedusa, which lies in the southern edges of Italy.

The Libya-Lampedusa route was briefly closed during the Arab Spring after the fall of the Gaddafi regime. In recent years, the route that served mostly Eritrean refugees has now become the preferred route for Syrian, Iraqis and other Africans, including Ethiopians.

Since Israel barb-wired its borders and became intolerant with refugees, and lately the Egyptian army has been waging a military campaign to demolish the camps of the human smugglers in Sinai, Eritrean and Ethiopian refugees and migrants are left with only the Libyan route as a choice.

An Ethiopian official reached by telephone told Gedab News, “I have nothing to add to what the official spokesman said, the Ethiopian government has not yet confirmed the identity of the victims of the atrocious act. We are working on it.” He added, “Ethiopia is doing all it can to help Ethiopians to return to their country if they want.”

[awate.com offers its condolences to the Ethiopian people in general and the Orthodox Christians in particular]
Tweet