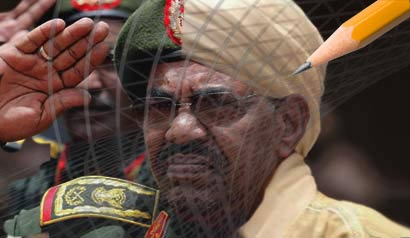 On Thursday night Sudanese polling stations closed their doors after four days of voting. On Wednesday, the three-day election was extended by one more day due to low voter turnout. According to Sudanese official news, the results will be announced on the 27th of April 2015.

In 1989 Omer AlBashir came to power as a brigadier general in a military coup. In 1996 he was elected president for a five-year term, again in 2000, and once more in 2010. But before his official final term ended, he was able to amend the constitution to allow him for yet another five-year-term starting 2015. Opposition attempts to force or dissuade him from running didn’t bear fruit.

The deposed Egyptian president Hosni Mubarek had also extended the term limit to stay in power, but was deposed by a popular uprising before he could finish the term. Mubarek pretended he had grudgingly accepted to stay in power one more term after he yielded to public pressure to stay. He publicly quipped, beware, ‘this is the last extension I will accept, don’t come and ask me to stay at the end of this term!’

Omer AlBashir didn’t pretend he was running for one more term due to public pressure; simply, he thinks he is the only worthy person to be the president of Sudan. Campaigning around the country, AlBashir scared the people by mentioning the chaos that destroyed other countries like Libya, Syria, and Yemen. At the same time he assured them, “we will not allow this to happen to Sudan.” Nonetheless, similar chaos has been happening in the Sudanese regions of Darfur and Kurdufan many years before the uprising of the “Arab Spring” started.

Low voter turnout has forced the ruling party operatives to campaign door to door to get the people to vote, while in the polling stations, security officers slumbered outside empty rooms. A turnout of about 20% is expected out of the 13 million registered voters from a population of 38 million, “even after the ruling party unofficially allowed people to vote without ID cards.” But the state media lauded the high turnout that no observer could verify.

Major Sudanese opposition parties, including Sadeq AlMahdi’s Umma Party, which AlBashir overthrew in 1989 have boycotted the election, and a few activists who campaigned against the election have been beaten and harassed. Over a dozen contenders have competed against AlBashir, most of them publicly unknown.

Several facebook pages and websites, including joint action opposition groups under the slogan “Arhal” (Leave) have been set up to campaign against the election. Judging from the low voter turnout, they were successful in dissuading people from voting. But apparently AlBashir and his ruling party were not worried because over a dozen presidential candidates and close to fifty parties competed in the election. For AlBashir, the campaign was mainly to bolster the image of his damaged party, owing to the fact that his next five- year presidency is given. That is, unless the unexpected happens and he is unseated, just like his predecessors in the Arab countries.

The former Nigerian president, Olusegun Obasanjo chaired the African Union (AU) group that observed the Sudanese election. In 2013, the observer Obasanjo gave his approval to the Zimbabwean disputed election where the 91 year old president Robert Mugabe was reelected. Mugabe has ruled Zimbabwe since 1987.

On Thursdays Obasanjo estimated about 33% of the total number of qualified Sudanese voters cast their votes.

Hundreds of observers representing several dozen organizations have observed the Sudanese election. “Many women voted…,” an official stated, apparently excited by the votes, not for the rights of Sudanese women who are used as pawns by the ruling regime. A Sudanese opposition reached by telephone remarked, “If the condition of women was measured by voting, African women can boast the highest women turnout in voting, but they are usually coerced and deceived.”

Omer AlBashir has leveraged the Saudi image implying that it supports his reelection and that investments will flood the country. Posters carrying the pictures of King Salman Bin Abdulaziz of Saudi Arabia and Omer AlBashir were displayed in the streets of Khartoum and other cities.

Sudan is part of the Arab coalition engaged in Yemen under the Saudi-led “Resolute Storm” and has committed more than 5000 ground troops and three fighter planes to the campaign. AlBashir was on an official visit to Saudi Arabia the day when “Resolute Storm” campaign started. Banking sources indicated that Saudi Arabia rewarded Sudan by depositing several billion dollars in Sudanese banks to rescue the Sudanese currency.

Under AlBashir’s rule, Sudan lost the South and is about to lose other parts of the country. In Kurdufan, an armed rebellion is raging against the NCP regime of Khartoum and has reached to the magnitude of the Darfuri rebellion of about a dozen or so years ago. As the regime pursues a military solution for Sudanese problems, the future of Sudan looks gloomy.

The NCP is deeply involved in South Sudan which was separated and announced a free state in 2011 through a referendum. AlBashir and NCP have been pitching one party against the other in a civil war that has been devastating South Sudan since President Silva Kiir and his vice president Riek Mashar ignited a bloody power struggle. All the countries of the region–Kenya, Uganda, Ethiopia, Sudan, and Eritrea–are involved in South Sudan in one way or another, some covertly others overtly.

In 2008, Isaias Afwerki of Eritrea visited Tehran and met the former Iranian president Ahmedinejad; the meeting was facilitated by Omer AlBashir. Last year Sudan’s relations with Iran, which used to be its ally, suffered after AlBashir ordered the closure of the Iranian cultural centers, which his regime accused as being “a conduit for propagating Shia’a Islam among the Sudanese Sunni Muslim population.” Since then, it has started to mend its strained relation with the Arab countries.

Sudanese diplomacy gained space after the International Criminal Court announced in late 2014 that it was stopping the investigation of war crimes in Darfur. AlBashir was indicted by the court in 2009 for crimes against humanity.