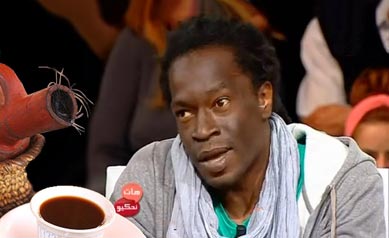 Overnight, Anis Shoshan, a Tunisian poet became a household name around the world. On April 22, 2015, Hannibal Television aired a program called “Taalu Nehkiyu” (Let’s Talk). Anis was sitting at the studio when he was given the microphone to blast his poem of peace that immediately went viral, and carried his name beyond Tunisia and the Meqrib countries, to the rest of the world. His revolutionary poems go back to the days of the Tunisian uprising, and one of his poems entitled “Alesh Ya Hekuma” (Why O’ Government?), harshly criticized the government. Anis Shoshan is nicknamed the Artist of Peace.

In the following poem translated by Awate.com, Anis addresses the issue of peace, society, racism and religious extremism. The youtube clip of the poem is embedded on this page. Enjoy.

Peace on you, and peace on us
Peace to you, and peace to us,
Peace to those who respond to the offer of peace
And even to those who don’t
Peace,
On the name of God, peace
The eternal refuge, the God of the faithful
Peace in which we grew up
Peace kneaded with the ground of this country
A peace we no longer dwell in
Peace that no longer dwells within us
The peace that we observe,
As it packs its luggage to leave our lands, slowly, and gradually
To be replaced by submission and surrender,
And Islamization devoid of Islam
As if the Islam of our ancestors doesn’t concern it.
Do you know why peace leaves us?
Do you know why we are engulfed by darkness?
Simply, because we are a fearful society
We are a society that fears diversity
My words, might not please some of you,
Or most of you
Or, all of you
I know!
But I will say it
Because I refuse to be like a sheep
We are a society, that refuses to admit
We nest in backwardness
We are a society that screams with all insolence
Claiming to carry a different thought
We are a society, that indulges in arrogance, in a vacuum
And claims to be a cultured
Woe to me, what a disgust!
We embrace diversity only as a mask
The difference of colors harms us
The difference of forms harms us
The difference of thoughts harms us
The difference of religion harms us
Even the difference of gender harms us
Thus, we attempt to kill our diversity
And we became a lethal poison to each other
We are a society sillier than the fool
Yes, we are a society sillier than the fool
We dispute over trivialities, exaggerations, and superstitions
We consistently refuse to dive into the deep
And I don’t absolve anyone
Neither civilians nor politicians
Or anyone who is calm in the dull quietness
Neither the one who claims we are holy
Nor the one who blindly follows the West
Or those who want to recreate the glories of the caliphate, and slavery
And to the amputation of legs over differences
Let us today, try to dive inside ourselves,
inside our deepness
Let us try to embrace our souls
Let us try to embrace our diversity inside our souls
Here I am,
In front of you
With my color,
with my hair,
And my poems,
And with my whimsical thoughts
I am not afraid of you
I am not afraid of your differences over me
Because I am of you
And you are of me
Let’s create art
let’s dive into the dreams
To build a culture immune of ridicule
To instill sophistication in ourselves,
In its superior state
Let’s dissolve traditions, races, specters, thoughts, colors, and religions
So we do not see, except a human.