Posted on July 6, 2021 by Ismael Ibraheem Al-Mukhtar in Articles 424 Comments 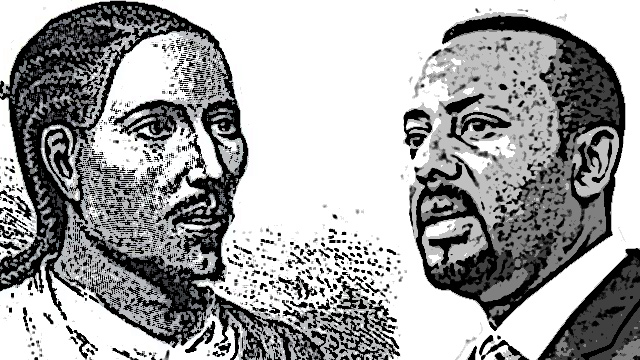 In December 1888, Yohannes IV, the emperor of Abyssinia wrote an unusual letter to his Mahdist rivals in Sudan. Along with the Italians, the Mahdist were his arch enemies and major challengers. In his lengthy letter, Yohannes IV, called on Abu-Anja, a Mahdist leader, to end their rivalry and establish peace between them. His letter had the following main points:

As noted by Eritrean author and politician, Osman Sabe, this letter was certainly “wise.” Regardless of its motive, which in some ways appear to be a political maneuver to neutralize the Mahdis and focus on fighting the Italians; the letter, on its own terms and within its historical context, was visionary and foresighted. It not only recognizes the pivotal regional interdependency, but it also carries a message of tolerance, peaceful co-existence, and acceptance of the other. In contrast, Abu-Anja’s response was hostile and blatantly rejectionist. One possible factor, among major others, was Yohannes’s reference to Abu-Anja as “Dejach (ደጃች)”, an honorary Abyssinian title, which the translator wrote it poorly as “Dejaj ((دجاج” and the Mahdi’s read it to mean “chicken” in Arabic (دِجاج). Thus Abu-Anja, in his response said: “You refer to me as chicken Abu-Anja, I am not a chicken rather you are the chicken…”!

Conceptually, Yohannes’s letter was exceptional; however, in real terms it was the antithesis of his policies and actions. Yohannes IV is viewed by his countrymen as a hero who defended his country from foreign invaders, but he is equally viewed by his detractors as a fanatic and intolerant leader. Yohannes undertook a conspicuous “religious unification” project, which led to an era of religious persecution and cleansing. In May–June 1878, Yohannes IV convened a council at Boru Meda, where the Tewahedo Christian creed was proclaimed to be the only official doctrine in his kingdom. Accordingly, all other Christian denominations, including Catholic and Protestant were deemed heretical sects and were harshly condemned. Other non-Christians, such as Muslims and Jews were called to convert or face banishments. As noted by the Italian missionary, Guglielmo Massaja, under Yohannes’s religious unification project, an estimated 50,000 Muslims, 20,000 “pagans,” and half a million “Gallas” -a wrong term used by Europeans to refer to “Oromo”- were supposedly forcefully baptized. Some prominent Muslim leaders in Wollo province were forcefully converted to Tewahedo Christianity. Thousands of Muslims fled to neighboring regions, many of them, as noted by Hashmi -author of the book on the history of Afar and Dankal-, took refuge in Afar region. The eighteen years rule of Yohannes IV came to a tragic end in the battle of Metemma with the Mahdis in 1889, where he was killed and his religious unification project came to an end. Tragically, his “wise” words were buried with him and saw no light.

I swear to God, we will never harm you!

In April 2018, Dr. Abiy Ahmed took charge of Ethiopian premiership. There was an immediate change of tone in the policies and bilateral relationship with neighboring countries. Shortly after his ascension, he paid a visit to Egypt. Following his meeting with Sisi, the Egyptian president; Abiy Ahmed, in a joint press conference, said to the Egyptians what sounded in essence what Yohannes IV said to the Mahdis. His statement highlighted the following:

The speech of Abiy Ahmed, delivered in Amharic, was very refreshing and visionary. It created a sense of hope of a new era of regional cooperation and peaceful co-existence. The response of the Egyptian president sounded optimistic, but also doubtful. He awkwardly asked Abiy Ahmed to repeat after him in Arabic “I swear to God, we will never harm you.” Interestingly, Abiy Ahmed, with some struggle in pronouncing the Arabic words, repeated Sisi’s words!

The good will created by Abiy Ahmed’s promising words didn’t last long. The optimism created was short lived. Egypt and Ethiopia are now on the verge of potential major conflict. The words of Yohannes went nowhere, they were dead at the time they were ascribed and they are now part of historical archives. History will tell what the fate of Abiy Ahmed’s words will be. Would they find the same fate as Yohannes’s words or would they become the candles of a brighter and peaceful future? There is still chance, his words could have a positive lasting outcome, but the current mounting tension points to the opposite.

The unmistakable writing on the wall

The above noted historic exchanges highlights the dichotomy that exists between these lofty words and the tragic realities on the ground. These words, even though, buried before fruition, they still remain relevant and they are the remedy for the regions endless conflicts. As long as these wise words remain far from the real life, the misery will continue. The people of this region are interdependent. They have common blood, shared history, mutual dependency, and common destiny. The regional history clearly illustrate that change of course is overdue; if not on principle, but on account of common interest. The short sighted “win the battle” mindset that infests the region is only leading to losing “the war” for all. The voices of factionalism, regionalism, sectarianism, need to be replaced with the voices of mutualism, bilateralism, inclusion and coexistence. Confrontation needs to be replaced with dialogue; friction needs to be resolved through negotiations; win-lose mindset needs to be replaced with win-win; hate needs to be replaced with love; grievances need to be replaced with forgiveness.

The tears of the mothers who lost their loved ones, the bloated belly of hunger stricken children, the bodies of the young killed in the dungeon of war, the scorched villages, the refugees stranded in no man’s land, the wasted natural resources, the polluted pristine environment, the endless misery and suffering of the masses is a clear message that a new way of thinking and a new approach is overdue. Neither Tigray, nor Amhara, nor Oromo…; neither Sudan or Ethiopia or Eritrea etc. can succeed unilaterally; the spirit of Yohannes’s letter and Abiy Ahmed words need to see light. Chauvinists of all stripes; regional, ethnic, religious, have ravaged the region and with social media at their disposal, they have poisoned communal relationship. Eritreans and Ethiopians, in particular, and their neighbrous need to think different and open their eyes to the unmistakable writings on their walls.

A new breed of leaders with a wiser sentiment, broader vision and creative thinking is desperately needed. Perhaps the kinds of leaders Nelson Mandela speaks about in his autobiography. Mandela notes that the tribal elders in his region don’t make decision on the basis 50+1, which he describes as Western, but on the basis of consensus. They spend lengthy hours in repeated meetings to achieve consensus instead of making quick decisions that only suits some and alienate others. He notes that they can do it because of their wisdom, experience, and commitment to the common good. True, the regional issues are more complex than tribal issues, but that only means more sophisticated and more shrewd leaders are need to be at the helm. Chauvinism and factionalism is cheap, shallow and cowardly, it doesn’t require much ingenuity. Consensus building, finding common grounds and fostering a broader collaboration requires creative minds, bigger hearts, and deeper foresights.

We are all in one boat!

Perhaps the example of the upper and lower deck of a boat in a saying of Prophet Muhammad is a good illustration that drives the point. The Prophet said:

“The example of the person abiding by God’s commands and the one who violates them is like the example of those persons who drew lots for their seats in a boat. Some of them got seats in the upper part, and the others in the lower. When the latter needed water, they had to go up to bring water (and that troubled the upper deck passengers), so they said, ‘Let us make a hole in our share of the ship (and get water) so that we do not trouble the upper deck passengers. If the people in the upper part left the lower deck passengers to do what they had suggested; then all the people of the ship would be destroyed, but if they had prevented them, then both parties would be safe.” Hadith # 2493, Bukhari.

Everyone in the region is in the same boat, the only way the boat can survive is to think the good of the boat not only a spot on the boat. It is understandable to see people dancing in the street after every factional victory. But the fact remains that the real time to celebrate isn’t when one faction prevails over another, but only when all factions prevail over their own egos and seek a common victory.

A paradigm shift needs to occur at all levels. Such a shift can only happen when each regional segment comes to terms with the fact that it is part of a bigger whole and it can only succeed when the whole succeeds. Intellectuals need to pave the way for such a shift and save their pen from serving chauvinistic, self-defeating, and shortsighted ventures.