Eritreans in Ethiopia Could Pay a Price, Again 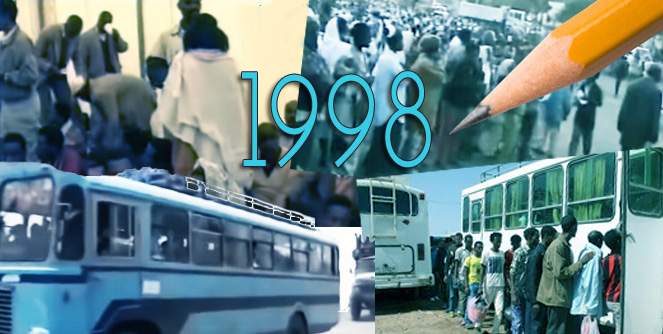 The EPRDF ruling party of Ethiopia, which was dominated by the TPLF and its allies, has been completely decimated except in name. The political chaos started as soon as PM Abiy launched a realignment of the EPRDF member parties and assembled a new coalition sidelining several parties, mainly the TPLF. Consequently, each of the ethnic-based coalition-member parties resorted to charting its own roadmap.

Meanwhile, Ethiopia is still marred by inter-ethnic tensions that have engulfed all regions of the country, the most affected by these tensions seem to be the Somali and the Tigray region. However, since the TPLF of Tigray dominated the politics of Ethiopia starting in 1991, the wrath against it, particularly by exiled groups (mainly in Eritrea) who returned to Ethiopia after PM Abiy granted them blanket amnesty, has gotten worse.

Tigrayans are being targeted and harassed by several extremist forces in other regions of Ethiopia. That is worsened because the distinction between the people of Tigray and the ruling party TPLF has been systematically blurred. As a result, it has become difficult for Tigrayans to move freely inside Ethiopia even though those in power and their allies claim there is a distinction between TPLF members and the people of Tigray.  For example, many Tigrayan truck drivers going to Addis Ababa are avoiding crossing the Amhara region for fear of attacks on their lives, and instead are taking the longer route through Afar region.

Anti-Corruption Campaign as A Cover

Soon after he came to power in April of this year, PM Abiy launched a frantic anti-corruption drive. So far, the suspects in the corruption drive seem to be mainly Tigrayan senior military, security, and public officials. They are being tried outside the legal channels through the federal news media in order to stir the understandable public sentiment towards corruption, to shore up support for its actions. However, media outlet belonging to rival ethnic groups such as FanaTV, are exploiting the anti-corruption measures as a pretext to fan an ethnic tension disguised as anti-corrupt TPLF officials.

For almost two decades, the EPRDF pursued an economic policy based on a developmental model and registered double-digit growth for many years. In a few years, the country was awash with business people from all over the world seeking opportunities, using the pool of ample debt-driven financing, and unprecedented market expansion. However, the absence of independent institutions and independent free media exposed Ethiopia to a clearly visible corruption that created an astonishingly high number of millionaires in a matter of a few years.

Most Ethiopians are led to believe that most of the beneficiaries of the corruption are Tigrayans  The TPLF is not doing much to correct this perception by not cooperating with the Federal government in apprehending those accused of corruptions and at times stands accused of harboring them.

Clearly, the prevailing anti-TPLF/Tigray vilification spearheaded by some ethnic-based political parties and their media outlets is expected to do more damage to the Ethiopian unity before it subsides, if it ever will— many people are led to believe all Tigrayan assets are solely acquired through corruption and nepotism.

The Ethiopian Metals and Engineering Corporation (MetEC) was established in 2010 as a government-owned construction and industrial enterprise, and it is at the center, and a target, of PM Abiy’s anti-corruption drive. Several officers of the corporation were already arrested while several others have fled the country.

The highly publicized arrests were carried out with a fanfare that seemed to aim at humiliating the accused before the courts could have a say. The arrests were made in front of glaring lights of television cameras and aired through the state media. At least in one case, an arrest was made inside the bedroom of an accused while reporters fought for every available space inside the bedrooms to get closer to the bed by which the accused stood.

Just before the recent crackdown,  Fana TV aired a 90-minute program aimed at shoring support for the allegation against MeTec. And now, the media trials have already found them guilty. It is hard to say whether the arrested will get a fair trial as Ethiopia is yet to professionalize its judiciary and law enforcement institutions

PM Abiy’s predecessors had also arrested political opponents using trumped up charges of terrorism to exert control over the country. It is very inconceivable the Ethiopian judiciary has become independent overnight; hence, it is too early to discern whether the current government will misuse the judiciary system to weaken its opponent within the EPRDF.

Since he came to power, PM Abiy, who is an Oromo and comes from the ranks of the EPRDF,  seems to be on a drive to dismantle and rebuild all economic landmarks created by the previous Tigrayan dominated government.  It’s no secret that the Ethiopian economy was corrupt, disorganized and millions of dollars went to waste to facilitate the stealing of public money. However, a business owner said, “the intention of the arrests seems to be of a vindictive nature as opposed to reforming the economy… it is all being done for political gains instead of legally righting the wrong.”

Eritreans could be trapped.

The situation doesn’t bode well for Eritreans in Ethiopia and the example of an Eritrean who was mistaken for a Tigrayan and killed several weeks ago illustrates the risk they face.

The TPLF of Tigray, the EPLF of Eritrea, and their allies were the main forces that “defeated” and overthrew the Derg regime in 1991 when they both entered their respective capital cities triumphantly.  For the next 6 years, the relations between the EPLF and TPLF were at their highest though at the expense of other political parties, most of whom chose exile instead of succumbing to the de-facto rule of intolerant fronts, particularly in Eritrea.

Meanwhile, the agreement signed between the two governments by excluding the stakeholders, the citizens of the two countries, went sour and led to the devastating 1998-2000 border war.

It was in the middle of the fomenting war that the Ethiopian government hauled close to 80,000 Eritreans some of who were born and raised in Ethiopia and deported them unceremoniously back to Eritrea. The Ethiopian government explained the decision by claiming that many were spies and collaborators of the Eritrean ruling party. And the evidence was a statement made by Isaias Afwerki threatening the Ethiopians with Eritreans who lived amidst them. It was understood to mean that Eritreans inside Ethiopia will commit subversive actions on a signal from Isaias. In the end, the psychological scar left on Eritreans and many Ethiopians with Eritreans ancestry and the widespread resentment are still damaging the goodwill among the two people.

Isaias would not change his character as evidenced by his meddling in Ethiopian internal affairs and now planning to involve Eritreans in his intelligence and economic exploitation schemes as a recent news report indicates. The agreements that PM Abiy made with Isaias Afwerki, alone, is not different in nature from the one the late Prime Minister Meles made with the same Isaias Afwerki, in seclusion. It’s incumbent on Eritreans and Ethiopians to realize that the ethnic and political tensions in both countries are likely to manifest itself in tragedies similar to the past: exposing Eritreans to more risks for a yet another mass deportation should the peace agreement go sour or Isaias’ meddling in Ethiopian internal affairs becomes unacceptable to the Ethiopian body politic.

The PFDJ scheme is being emboldened by the recent hush-hush directives of the Ethiopian government, which instructed Eritreans in Ethiopia to secure all their needs of paperwork related to residence permits and travel, etc., through the Eritrean embassy in Addis Ababa, and not directly from the Ethiopian offices as was the case until recently. It’s prudent to remember that Western many countries, including the UN Somali Eritrean Monitoring Group, repeatedly reported that the Eritrean embassies often engage in elicit taxations and financial activities on behalf of the Eritrean ruling party and the businesses it owns.

Living in Ethiopia, and being at the mercy of the PFDJ embassy, entails many problems as people living in the Middle East, Sudan, Europe, and the Americas would attest. Any Eritreans walking into an Eritreans embassy is required to fill up a “Regret Document”, asking forgiveness for anything they did or were thinking of doing against the ruling party, before asking for a consular service. That follows other draconian laws that require Eritreans living and working in foreign economies to pay 2% of their income to the government through its embassies—and many other conditions for getting any consular service from an Eritrean embassy. Such laws were created by the PFDJ to secure its illegitimate rule to force citizens not be part of any opposition to its indefinite grip of power and to collect a portion of their hard-earned income.

At this moment, most Eritrean opposition personalities are already out of Ethiopia, though a few who had tied their fate to the TPLF, are left behind.