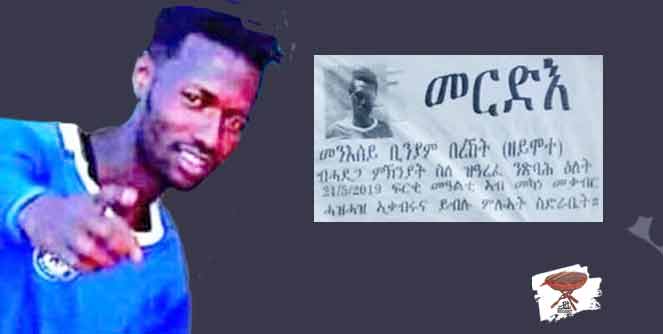 Ten people lived in a room with a leaking roof. The rain wouldn’t stop, and the floor became wet and slippery. On several places the water accumulated and formed ponds. The small room became uncomfortable. The people used cups and spoons to scoop the water and managed to clear the ponds. But an hour later, the pools were full again and they started to scoop it again. Do you think they have solved the problem?

Unity is strength. An Amharinya adage says, “a set of weak threads could tie and immobilize a lion”. The importance of unity is recognized by all cultures, by all human beings. In fact, all human beings emphasize that peace, stability, and development cannot be ensured without unity.

In the Eritrean context, unity has been a central theme throughout our history, particularly in our recent history since the fifties of the last century. I do not know of anyone who is against unity. Alas, to some, unity means submission and compliance to the will of the powerful. That is the kind of unity the PFDJ has been advancing throughout its existence.

No doubt the common Eritrean yearns for unity, not only as a tool to achieve political goals, but for superior goals as a means for the advancement of state of the nation. In short, the unity monster has remained elusive. And though we have been pursuing the goal of unity, it has become similar to chasing a mirage. Sadly, our energy and  resources are being wasted in scooping the pond with cups and spoons instead of sealing the leaking roof.

Eritrean unity, particularly among the justice seekers, can only be achieved when we learn to hold a large basket, fill it with all Eritrean ethnic, religious, regional, and partisan grievances, and recognize it as a container of our entire national problems. Once we have all the national problems in one basket, and we attend to it as an inseparable set of problems, we will be on the right path to embark in the journey of resolving it. However, if we consider the disjointed grievances as separate problems, we will remain amateurs, and we will never be able to address our real national problem. Worse, we will waste our time and resources trying to sort the national problems by focusing on selfish interests at the expense of our scattered issues that will be impossible to resolve.

For instance, if the non-Kunama Eritreans are not interested in the grievances of the Kunama people, and focus on their different self-centered group issues, we cannot claim to have a national concern. Focusing on one’s own ethnic and religious issues at the expense of other issues is selfish and doesn’t serve the national cause.

Sadly, our knowledge of the grievances of people outside our social of geographical confines is appallingly poor. It’s exasperated by our tendency of trying to impose one’s comfortable solutions on others. And that doesn’t serve the goal of unity but pushes it further away.

Sadly, many meetings and gatherings address specific issues that concern the majority of the attendants and sadly again, the meetings downplay and belittle the concerns of others. In such a situation, especially when similar gatherings become a norm, it becomes customary for the same mistakes be repeatedly observed in one meeting after another. Therefore, It’s natural that those who feel their concerns are ignored to lose interest in the events altogether. Then we go back to our favorite pastime: trying to scoop the ponds instead of sealing the roof.

On this occasion, I would like to congratulate the organizers of the Washington, DC, meeting of the #Yiakl movement. Now that the initial meeting is over, I wish we can delve into more serious discussion, an honest and bold discussion to attend to the real Eritrean issues. And I hope the time is ripe for such an undertaking.

Almost two decades ago, the opposition camp was crippled by wedge issues—armed struggle vs. peaceful struggle, accepting the 97 PFDJ constitution or not, traveling to Ethiopia or not. I wonder why similar issues are being resurrected now! But I have an suspicion: some people are busy calculating on how to secure positions and power in post-Isaias era. Isn’t that a bit of an overstretch when the tyrannical regime is still sitting on our chests?

Biniam Bereket and #Yiakl in Asmara

A few days ago, someone posted a picture of a young man on social media and claimed he was shot and killed in a confrontation with the security officers in Asmara, in an Independence Day ceremony. The young man, Biniam Bereket, was allegedly among a group of youth who pelted the guards with stones while shouting #Yiakl slogans. The evidence presented for the news was a public announcement posted on a public board in a street in Asmara. In no time, many people took that news at face value and have been posting and cross-posting the picture of Biniam Bereket on social media.

Whatever the reason for his death, I wish God gives them the patience to deal with their loss and may he rest in peace.

Naturally I am very skeptical about such news, and I have a problem with it. I am not convinced of the assertion, and I would like to challenge whoever spread the news for the veracity of the news.

My suspicion is based on modus operandi of the PFDJ regime. First, the regime will never allow a picture of a man killed in such a situation to be posted in a public space. Second, Asmara is not like Shanghai with millions of residents; it is a small city where the degree of separation is too low–everybody should have known about the incident. And in order to be on the safe side, I tried to verify the news personally, and a few of my friends did the same. I cannot reject it altogether but all of us were not able verify the news. So far, it seems the source of the news is the grapevines, a gossip concocted in the diaspora—a product of “entay yebahal allo”, a propaganda culture that doesn’t subscribe to accountability.

Over the years we have seen people who chose to engage in propaganda and counter-intelligence activities, and they think such information emboldens the opposition and demoralizes the regime. However, I hold the view that such news have short-shelf life, and it is damaging in the long run because it puts the credibility of the entire opposition camp (particularly the media) in question.