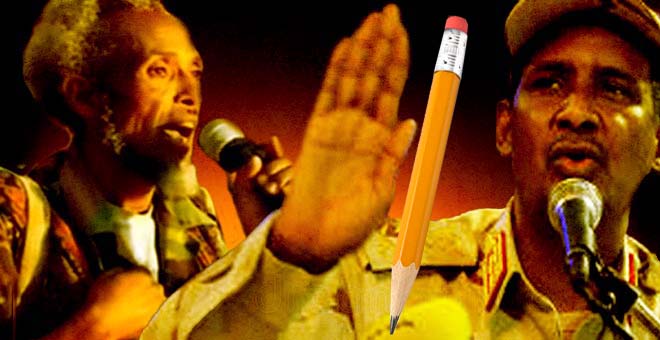 Eritrea, the modern-day Gulag, locked physically and psychologically, where screaming is a whisper. The ears hear but so terrified, they fail to process what they hear. The eyes observe events secretly but pretend what they see is not real. It’s a country of silence where talking is risky, and costly. A hermetic state strictly guarded from the world and its nosy press, where people are made to believe what happens to them is a figment of imagination, an illusion constructed in tired minds that forgot their national duties. A hermetic state with no alternative information sources except for the fearful whisper. Where the only source of information is monopolized by the PFDJ government, the titleholder to the country that provides non-political information, on a need-to-know basis. There are no news-news on the press, television, radio, but only the lethal rumor mill released from the same source controlled by the no-government government.

As its neighbors (Sudan, and Ethiopia) go through unprecedented social, political, and economic upheaval and abundant information, in Eritrea, the only media which believes all information are anti-national security, there are only flowery propaganda, its version of information. Since many years ago, it didn’t mention the civil wars in Ethiopia or the unrest and chaos in Sudan, or any other escapade in which it’s involved. The exhibit follows–

For instance, on Tuesday the official website of the ministry of information provided the usual stable of kosher information: Two anniversary items of the struggle era; an aviation college graduation; commemoration of Down Syndrome Day; cycling news; and several announcements related to the ministry of health. It also carried a heading, “Eritrean Woman’s Story is all about the love of her Country.” Another slogan-like item had a title: “Gender Equality in and through Education.” Such are the daily doses that are fed to the people as a substitute for real information and news.

Meanwhile, some Sudanese opposition forces stated that the Military authorities have agreed to reinstate Abdalla Hamdouk, the ex-Prime minister of Sudan, fired last October by AL Burhan, together with his cabinet. AlSharq-AlAwsat, the Arabic Newspaper, reported Al Burhan reaffirmed his commitment to a democratic election after the transitional period. However, it said that AlBurhan wished all civil and political forces should agree on a prime minister and denied that a specific person has been identified as a future head of government. He also ruled out “the return of Hamdouk to the position which he left [was fired from] several months ago.”

Sudan’s Central Reserve Police has been sanctioned by the USA Treasury for using “excessive force and violence intended to silence civilian activists and protesters,” since the October 25 military takeover, which undermined the “power-sharing agreement between the army and civilians that …was negotiated after the 2019 overthrow of longtime ruler Omar al-Bashir.”

Concluding his visit to Saudi Arabia recently, Al Burhan stated his government will work to create a conducive environment to absorb the “huge Saudi investment initiative, soon.” That requires time and Sudan is threatened by a total economic collapse. Since the October coup, its foreign exchange reserves is almost depleted, and “the Sudanese Pound is going through a spiraling devaluation.”

For decades, whenever the country faced financial difficulties, Sudanese authorities raced to the Gulf states to be bailed out, shifting their alliances between one country and another. Until the last inter-Arab Gulf crisis, the sugar daddy was Qatar, but now it has been replaced, mainly, by the UAE which favors Mohammed Hamdan Dagolo (Hmetti), who shadows AlBurhan with his leverages, thanks to the ruthless RSF, which came on the heels of Janjaweed, its precursor. Thus, Hmetti the leader of the RSF has his wings spread all over the place–from Darfur, to Libya, to Chad, to Yemen, to Russia, and all over the regional countries.

The Sudanese hotspot of civil unrest continues to be Port Sudan, and situations worsened after the military rulers stated Sudan could lease (or allow naval bases) in its ports, to Russia. However, Hmetti tried to deny the news publicly after severl statements by senior military officiuals provoked the port workers who reacted with protests rejecting the “privatization of the port.”

There is another crisis as well: the Sudanese gold resource seems to disappear in thin air though Sudanese opposition forces believe the authorities are smuggling it out secretly. Hmetti reacted by holding a meeting in which he single-handedly, from his seat, legislated a sentence for smugglers: “anyone who smuggles a kilo of gold, the sentence is a one-year jail term…. For a ton of gold, the sentence is 1000 years of jail term.” He didn’t say how many life-termns that is!

To the West of Sudan, a peasant militia force, known as Fano, which is not controlled by the Federal Government of Ethiopia, has been wreaking havoc all over Northern Ethiopia, particularly in Tigrai, Qmant, and Benishangul-Gomez regions. It is accused of carrying out massacres and pillaging the area. It’s also believed to have been part in video recorded incident in which Tigrayan citizens were killed and pushed over a cliff, and recently an incident where several persons were burned alive.

If all of that brings similar memories from the past, it’s the memory of the 2003 atrocities in the Darfur region of Western Sudan, a devastating conflict in which nomadic and sedentary tribes were pitted against each other for years. The main actors in the atrocities were the Janjaweed militia.

In 2013, Omar AlBashir, the ex-Sudanese president absorbed the Janjaweed into the state security apparatus and since then it’s known as Rapid Support Forces, Hmetti’s loyal force and leverage. In the raging upheaval in the region, the allies of the Eritrean regime are both Fano and RSF.