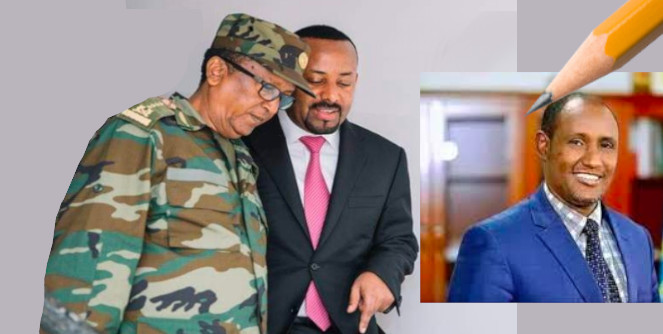 Last Saturday, for a few hours the ancient city of Bahir-Dar, the Amhara state capital, became the most famous city in Ethiopia, then the relatively modern city of Addis Ababa, the national capital, stole the limelight. By early Sunday morning, the two seats of political powers finished in a tie and emerged as metaphors of two clashing identities based politics defined by ethnicity and transethnic nationalism.

The first represents attempts by an ultranationalist ethnic group to regain lost glory of a bygone feudal era that, for centuries, dominated Ethiopia political life through a unitary central government. The second, embraced by the historically marginalized ethnic groups, attempting to assert their rights through an ethnic based federal arrangements of decentralized autonomous states.

However, the Oromos who once decried past dominations by the Amhara, and recently by Tigrayans, are now being accused of being the oppressor du jour.

Though the conflict appeared as the center trying to subdue the periphery, the struggle for the hearts and minds of Ethiopians is the struggle between those advocating for a unitary state and others calling for a federal system of governance.

By Monday, Ethiopians began a painful mourning for both tragedies and tried to grapple with the mayhem left by the two incompatible forms of nationalism.

Until Tuesday, the internet was down in Ethiopia. Details of what happened in both cities were confusingly clouded by rumors, but the ominous situation and the expected grave consequences couldn’t have been clearer. Already, communal and ethnic violence has displaced 3 million people since PM Abiy took office last year.

A coup d’état in Search of a State

In a local meeting in Bahir Dar, the home of Amhara, Ethiopia ‘s second largest ethnic group, a heated argument ensued. Dr. Ambachew, the president of the Amhara state, and his adviser Ezez Wasie were shot and soon died of their wounds. The regional attorney general was also shot and on Monday, he died of his wounds.

PM Abiy’s spokesperson said the killing was committed by a “hit squad” under the leadership of General Asamnew Tsige, the region’s security chief who languished in jail for nine years before he was released with other prisoners in a general amnesty last year. No details or evidence of the accusations was offered.

After a few hours, in Addis Ababa, General Seare Mokonen, Ethiopia’s chief of staff was allegedly killed by his bodyguards in his residence together with another retired general, Gezae Aberra, who was at the residence. Again, the PM Office didn’t offer details, but said the two incidents were related.

In the middle of the night, Prime Minister Abiy Ahmed, appearing clad in military fatigues and visibly shaken, made an impromptu statement that went viral on regional social media. He explained the Bahir Dar incident as a coup d’état and appealed to Ethiopians to be united against “forces set on dividing the country.” He also said that the alleged killer of General Seare Mokonen was in custody, but on Monday his office reported that the alleged committed suicide.

But how can a state carry out a coup d’état in a federal country? That’s Ethiopia redefining coup d’état.

For the residents of Bahir Dar, there were no indications of an attempt to assume power unlawfully. Only a few gunshots were heard. There was also no evidence that the alleged perpetrators attempted to take control of the city or any vital government buildings.

But now that both the  moderates and extremist in the Amhara region are left without leaders, and the government account does not seem to be credible, it remains to be seen whether the federal government will have similar success in reigning over the rogue elements like it did in the Somali region, or  it will  unleash another round  of ethnic violence in the Amhara region.

Details that complicate the story

Though General Asamnew Tsige is an established Amhara supremacist who aspired to continue the aggressive posture against Tigrai and the sovereignty of Eritrea, it doesn’t seem he had a premeditated plan to kill Dr. Ambachew, at least not in that specific meeting.

On Monday, the Ethiopian government said that General Asamnew was killed by the federal police in a small town near Bahri Dar.

Details that clear the story

General Seare is one of the few senior Tigrayan officials left in the federal government. And the hate message that began last year against his ethnic group was all too prevalent to miss. In addition, he was in charge of approving the dispatch of the federal forces to intervene if anything goes awry in the regional governments; he faced a similar situation last year when the federal forces intervened and ousted Abdi Illey, the rogue governor of the Somali region.

Though not officially stated, there are speculations that General Seare could have been killed in retaliation of his involvement in a plan to deal with General Asamnew, a process that might have already been underway as General Asamnew became more and more brazen in his effort to incite ethnic violence. Last week, General Asamnew put out a video openly calling for all Amharas to arm themselves.

For the keen observers of the political situation in the region, it was somewhat Déjà vu. The widening gap between the federal and the Amhara state was too evident, particularly since February when the power centers started to shift. PM Abiy was leaning towards rapprochement with the TPLF, which was at the receiving end since it lost power in the spring of 2018. Also, to curb the damage by the hardliners of the Amhara region, its government went through a shakeup where the president was removed and replaced by the moderate Dr. Ambachew Mekonone.

On June 10, 2019, Abiy visited Tigrai and met with Dr. Debretsion, the president of the region. Weeks prior to that visit, the relations between Abiy and Isaias Afwerki of Eritrea had started to cool down. The few months old Euphoria had finally fizzled out. Yet, Isais Afwerki maintained a close relationship with the Amhara regional politicians.

Last year, several Amhara opposition groups who were stationed in Eritrea had returned home. Many of them exploited the freedom that they found and adopted more hard-line positions, particularly against the neighboring Tigrai region. They also kept displaying provocative and aggressive attitudes towards Eritrean sovereignty: peddling ancien regime’s imperialist ambitions, showcasing an Ethiopian map which incorporated Eritrea, and more. And now, after the incidents of last Saturday, many are under arrest–some are suspect, while others could be needed for investigations, or to be interrogated to shed light on the events that unfolded in Bahir Dar and Addis Ababa. One of those detained is Dr. Iskender Negga who was arrested while returning from Bahr Dar. He was expected to attend a rally organized by the hardliners to address the Addis Ababa land issues.

Some of the groups that returned to Ethiopia last year have fully embraced Isaias Afwerki, their patron, who openly endorsed their extremist agendas. And that became worrisome for many Eritreans and Ethiopians when his allies invited him to the Amhara region. On Nov 9, 2018, Isaias was received in Bahir Dar and Gonder with a lot of fanfare. Stories that Isaias’ grandfather was buried in Gondar, as was narrated by PM Abiy, served as an assurance, the reason why he was received as the returning prodigal son.

Isaias has counted on the Ethiopian opposition groups and personalities he groomed as political leverage when he saw them off as they returned to Ethiopia. And they didn’t let him down: they helped him sustain the plan to isolate the TPLF, the ruling party of Tigrai which is the archenemy of the PFDJ, the Eritrean ruling party. The anti-TPLF propaganda campaign didn’t let down ever since but just lost its effectiveness when Dr. Ambachew was elected to be the president of the Amhara region in a step intended to recalibrate the region’s relation with Tigrai. But the region’s hardliners were unhappy and continued their abrasive rhetoric against all those who wanted to keep the federal system intact as well as against the sovereignty of Eritrea in ways reminiscent of the Ethiopian imperialist and Derg eras. Dr. Ambachew didn’t fit in the scheme of the hardliner who contend that not much has changed for their ethnic group since PM Abiy came to power, and claim that the Tigrayan domination has been replaced by an Oromo one.

The hardliners were not happy with Abiy Ahmed.

Brig-Gen Asaminew was the Amhara region’s security chief and was said to have enjoyed a significant following among the radicalized youth; he had perfected the art of nationalist rhetoric, promising to achieve the dream of the hardline ethnic nationalists for a hegemonic, and greater autonomy for the Amhara people. To that end, he had been recruiting nationalist militia forces in the region urging the people to arm themselves to fight other groups and regions. General Assamnew harbored hate against the Tigray region from which Gen Seare and general Gezae Abera hail, and he radicalized many in the Amhara region that is facing grave security problems.

General Seare Mekonnen had served as the military chief of staff for a year. PM. Abiy had appointed him when he made sweeping changes in the security apparatus soon after he took office in April of last year. Previously, he was the commander of the Badame front during the Eritrean-Ethiopian border war of 1998-2000.

The recent killing incident and “coup” attempt is clearly a sign that the country faces significant security challenges. And the killing of Dr. Ambachew is also a big blow to PM Abiy, who according to the hardliners, had installed him in office.

In addition to the tremendous challenges on how to address the two competing forms of nationalism in Ethiopia, it is unclear if the 2020 planned national election will take place; the government has already postponed the national census until next year. Holding elections without a census will create complications in determining numerical representations in the federal government, and in allocating resources to the states. And that could prove to be a serious issue that might hinder PM Abiy’s plans.
———