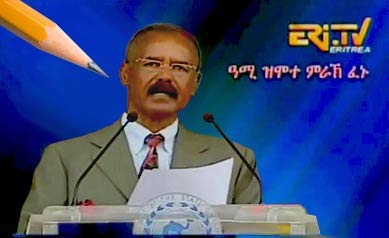 Africans in general, and Eritreans specifically, remain skeptical about the benefits of high profile summits, meetings, conventions, and discussions at the margins because, throughout their history, they have rarely seen tangible benefits from these “baptismal parties” that come and go. It was this sentiment that Eritrea’s State television, Eri-TV, was trying to exploit with its blistering “let go of the calf that died last year” editorial, which it aired on August 7th. Why? Because of what happened August 4th– August 6th: President Obama hosted the US-Africa Summit and the Eritrean dictator was one of only four African leaders who was not invited. So, a more appropriate title for the editorial might have been an Eritrean proverb: “They Rustled Our Cows But [it’s ok because] We Hailed Insults At Them!”

Skeptics of such summits have many reasons to be skeptical. First, of course, is on the criteria for the invitation: any country that is in good standing with the United States and the African Union was invited. This means, as Mother Jones magazine pointed out, Congo’s Joseph Kabila, massively corrupt and incompetent, was invited; Rwanda’s Paul Kagame, Isaias Afwerki’s twin soul for his austere authoritarianism, was invited; Mauritania’s Ould Abdel Aziz, huge violator of human rights AND presiding over a country that still tolerates slavery, was invited; Uganda’s Yoweri Musevini, a hardcore, old school African Big Man, was invited; Equatorial Guinea’s Obiang Mbasogo, in power since 1979: (need we say more?) was invited.  Re-invited: Mbasago’s third visit to the White House.

Thus, it is very unclear what “being in good standing with the United States” means since the United States, which very briefly in the George W Bush years had said that it has learned from its long experience of coddling authoritarians for the sake of stability because you get neither democracy nor stability with dictators, has resorted back to form: any country that is willing to buy weapons from the US or accommodate its arms sales to the world appears to meet the criteria of being “in good standing with the United States” so long as the African leader is willing to, occasionally, mouth platitudes about democracy.

As for being “in good standing with the African Union” that appears to have even fewer demands. The AU has a firm-sounding policy that a country whose leader comes through a coup is not eligible to be admitted to the AU club, which sounds impressive until you consider the fact that the authors of such policy were, themselves, beneficiaries of such prohibition. The grandfather clause is not a bug, but a feature. Moreover, the AU is not interested in how a leader comes to power, so long as the leader gives the appearance of having the legitimacy of carrying the people’s mandate.

Just in 2014, Egypt, Guinea-Bissau and Madagascar joined the AU club by holding sham elections which were enough to get their suspensions lifted.

Thus, Isaias Afwerki, who came to power piggybacked on the legitimate cause of the Eritrean people’s long-standing demand for self-determination and self-rule, would appear to meet their minimum demand. But he failed even that test. Now, does that make him a rebel, a stand-out, a voice of Independent Africans? Well, let’s consider the company he keeps; let’s consider who else was not invited.

The Company He Keeps

His only friend, the president of neighboring Sudan, Omar Al Bashir, was not invited. Al Bashir came to power, through a coup in 1989 (double coup, actually: his party came to power through a coup; he personally came to power by engineering a coup over the flamboyant Al Turabi) and he has presided over a horror show that included multiple civil wars, genocide, and, according to Wikileaks, massive embezzlement—9 billion dollars worth, stashed in London banks.

Africa’s latest “pan-African” (who discovered his Pan-Africanism after he lost the favor of England), the president of Zimbabwe, who has been in power since 1980 (as Prime Minister or President) is the other exclusion.  Mugabe has brought ruin on his rich country: his country is sanctioned, there is a travel ban against him (he can travel to the Vatican). Mugabe has achieved the impossible: turning a country destitute WITHOUT war.

Finally, the leader of Central African Republic, Catherine Samba-Panza, was not invited because her hurried appointment as Prime Minister is somewhere between a coup (2013) and scheduled elections (February 2015.)

“Eritrea will not be invited because the U.N. continues to sanction Eritrea for its efforts to destabilize Somalia and because Eritrea has not accepted full diplomatic relations with the United States, rejecting our offer of an ambassador,” the White House official said.

This means that if Isaias Afwerki were to take measures tomorrow morning to accept a US ambassador to Eritrea, he would be invited to US-Africa Summit II by doing absolutely nothing else. He accredits a US ambassador; the US ambassador says Eritrea is no longer destabilizing Somalia; the Djibouti-Eritrea border is demarcated in days.   None of the factors that contributed to Eritrea becoming a hell-hole rise anywhere to the level of importance (much less urgency) that would warrant his exclusion from future “baptismal parties.”

That being the case, what we in the Opposition should understand very clearly is that, while the foreign governments and non-governmental organizations (NGOs) can be allies to our cause, we Eritreans must be the ones who OWN and develop the strategy for defeating the Eritrean regime and then for delivering salvation to our people. The US won’t; the EU won’t and the AU won’t. This is not a call for isolation; rather, it is for intelligent alignment: we should seek out alliances with the people of Africa who are subjected to similar power abuse and not with the fickle governments who are willing to turn a blind eye to them.

Let Go of “The Calf That Died Last Year”

This brings us to Eri-TV’s editorial entitled “Let go of the calf that died last year.” (Hateta. Eri-TV. August 7, 2014), a critique of the US-Africa Summit and the alleged hidden agenda behind it: for the US to leverage Africa for its own economic interest. This is the English translation of the Eri-TV editorial:

Recently a party that was called “Africa Summit” was convened. The occasion and its goals do not require a lot of analysis and commentary. Its announced public relations goals are to express the concern of America for the destitute Africa that is suffering from poverty and famine, disease and terrorism; and to provide it with alms. America, with its accomplices, being one of the main causes of poverty, famine, sickness and terrorism in Africa, how can it be caring and generous?

Where would America get, or snatch from, the billions of dollars [it intends] to give as alms to Africa when it is has trillions [of dollars] of debt and trade deficit, and when it is ravaged by economic and financial crisis?

The true aim of the party [the summit], as is proved by figures and realities, is a cacophony that followed an intensely emphasized propaganda, to invite the leaders of Africa to kiss the hands [of the USA] to reinforce its mastership, fame and influence, to beautify the aura of sole superpower status of America, under the cover (or umbrella) of a public relations exercise, and all that for an already exposed chaos, in different baptism parties: sometimes [under the pretext of]  global alliance, or NEPAD, or AGOA, etc. —calves that died in vain after being named and, thinking the memory of the people is dead, to revive it, to exploit the resources of Africa, is a search for remedy to cure the economic chaos of America.

The countries and people of Africa individually, and the African continent in general, are respecting and maintaining their free choices by learning from their experiences; rejecting foreign interferences; disruption, agitation, and looting. With their unmatched potential, if they can exploit their own resources—by following uncorrupted and responsible avenue; by staying away from alms and deceit—they can sustain themselves and others.

It is time to state: ‘Enough subterfuge.’

The United States has always had the same policy when it comes to Africa and the Eritrean dictator was a close ally of the United States, baptized part of the African frontline states and New Generation of leaders. So what changed? What changed is one and only one thing: when Eritrean and Ethiopian leaders were allies, the US did not have to choose between Eritrea and Ethiopia. When they became foes, the US had to choose and it chose Ethiopia.

To put it more personally, which is the only language Isaias Afwerki understands, the United States chose Meles Zenawi over Isaias Afwerki. This, despite the fact that Eritrea’s control of part of the Red Sea was supposed to give it an advantage over Ethiopia.

Rather than swallowing his pride and prioritizing Eritrea’s national interest over his own ego, the Eritrean tyrant has gone on increasingly destructive adventures designed to frustrate US interests in the Horn of Africa and particularly Djibouti and Somalia. And a decade later, the tyrant has not become what he had hoped he would be: an African rebel standing up to a superpower. Far from it: he has isolated Eritrea, he has impoverished her and, more ominously, he is emptying out the country of its most productive citizens: its youth. His foolhardy policies have resulted in sanctions that have left Eritrea completely defenseless—no Eritrean youth to defend her; no weapons to defend her with and, most dangerously, no cause to fight for as his warlords have sapped Eritreans of their natural sense of patriotism.

So, never mind the calf. Mind the cow rustler.