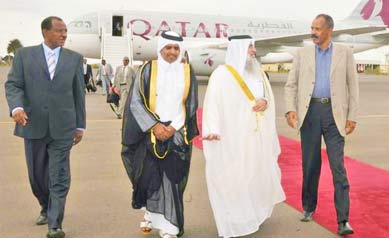 Qatar, which is mediating the Eritrea-Djibouti border demarcation, appears to have yielded to Eritrean President Isaias Afwerki’s blackmailing by instructing Qatar Airways to include Eritrea in its destinations.

The State-owned Qatar Airways made its announcements to schedule twice-weekly flights from Doha to Asmara on August 13, 2014, days after the Isaias Afwerki regime arrested a Djibouti official who was accompanying Qatari officers who monitor the border as part of the Qatar brokered Eritrea-Djibouti mediation.

The flight to Asmara is scheduled to commence on December 3, 2014.

Qatar Airways’ announcement of its scheduled flights to Asmara bears striking resemblance to the one it issued on March 23, 2014 when it announced that it would fly to Djibouti beginning on July 27.

The announcement for the two destinations were almost identical:

Last week, Olympic Airways, one of a string of airlines who had short-lived flights to Asmara, cancelled flights from and to Eritrea. Stranded passengers had to make new arrangements through Dubai.

All previous attempts of the Eritrean regime to have a national carrier have failed due to interference of the government and inefficient administration. Eritrea has virtually been denied its own national carrier or an efficient service by regional airlines. Due to lack of convenient flights, Asmara airport has been serving fewer and fewer passenger.

Gedab News has received a statement (dated August 13, 2014) issued by the Djiboutian Ministry of Defense of condemning the recent detention of one of its officers, Master Corporal Ahmed Abdullah Kamil*, at the demilitarized zone between the two countries.

The statement states that the Master Corporal was “fulfilling his duties in assisting the Qatari forces that were assigned to monitor the armed forces of the two countries.”

The Djibouti Ministry of Defense demands “immediate and unconditional release of the detained soldier.”

“Republic of Djibouti condemns the virulent new injury on Djibouti by Eritrea that once again ignored the rules and conventions governing international laws of war.”

Djibouti accused Eritrea for “its belligerent behavior” and repeatedly attempting to grab Djiboutian territory, and that it wants to “plunge the region into chaos and instability.”

In what appeared a reflection of Djibouti’s frustration over the mediation efforts, it urged Qatar “to implement all necessary steps to resolve the border dispute and to end the Eritrean occupation.”

On the Eritrean side, informed sources told Gedab News that Eritrea has accused the Master Corporal Ahmed Abdullal Kamil of being a CIA spy who penetrated the Qatari forces.

* On August 11, 2014, Gedab News name the detained Djiboutian soldier as Lieutenant Qassim Mohammed, it should be corrected as Master Corporal Ahmed Abdullal Kamil.