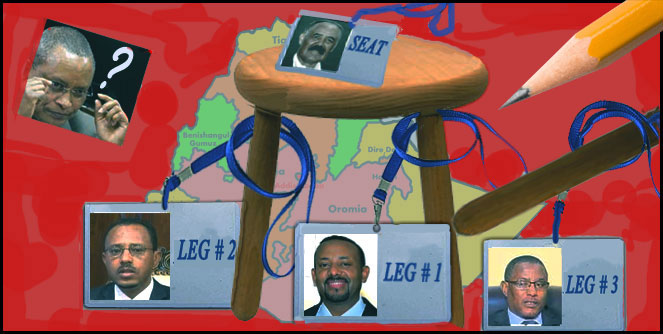 [This Pencil Editorial was first published on March 18, 2019. Today, three years later, we are republishing it hoping it might help refresh our memories on what transpired since then might//Editor]

At the beginning, avid admirers considered it pure gold, now they are startled, Team Lemma has lost its luster. Also, unbeknownst to many, it’s the Isaias stool that is wobbling after it lost its third leg.

Last July, in several reception functions, both in Eritrea and Ethiopia, an emotional Isaias Afwerki voluntarily (and casually) passed the scepter, a symbol of Eritrean dictatorship, to Dr. Abiy and promised to be his loyal subordinate. But Dr. Abiy had emotionally and repeatedly confirmed Lemma was the leader and that he was a member of Team Lemma, an entity outside the formal government structure.

Since the spring of 2018, the three-legged stool effectively sidelined the TPLF, the party that engineered the EPRDF which is still ruling Ethiopia since 1991. The TPLF was also the party that brought every politician and his uncle to the EPRDF and successfully led to the defeat of the Derg regime.

Also, several times In 2018, the three-legged stool was used like a Chinese palanquin, a Bajjaj or a rickshaw, to move Isaias to many Ethiopian cities where he received a warm welcome that it seemed he was about to be sanctified. But he was already a saint to his diaspora constituencies–who have much influence in Eritrea (a considerable number of Eritreans are subsidized by their relatives in the Diaspora) and they subscribe to the goal of using the now damaged stool legs to destroy Isaias’ nemesis, the TPLF.

After PM Desalign resigned in early 2018, Lemma successfully executed a strategy in a last-minute vote switching to make Abiy legible to be elected the PM of Ethiopia through secret shift of alliance within the EPRDF.

Now, Team Lemma’s supporters are concerned the much-hoped for political dispensation might not materialize any time soon in Ethiopia.

Amhara elite has concluded the EPRDF has changed beyond recognition and their chance to lead it has diminished greatly. They feel that for better or worse, the OPD has replaced TPLF, as evidenced by their recent stance on the unrest over the status of Addis Ababa. Consequently, they seem to have a buyer’s remorse after buying into the reform agenda. Thus, a change in strategy to better position themselves for the 2020 elections, necessitates forging a new alliance.

Meanwhile, Isaias’ gamble to regain political relevance, by relying on Team Lemma at the expense of Eritrean sovereignty, has become a mirage. In addition, his meddling in Ethiopian internal politics was rebuked by Jawar Mohamed, leader of  the Oromo youth (Qeerro) who were instrumental in forcing last year’s change.

Before the Making of the Three-legged Stool

Having replaced the TPLF as a major party in Ethiopian politics, the stool was not content. It wanted to demolish TPLF completely. Gedu Andarkachew’s political and populist constituency’s ambition was not yet satiated. For centuries the expansionist strain of the constituency has controlled Ethiopian (and Eritrean) fate by the tips of its tentacles. It stayed at the helm of power until 1974, the year the Derg, an obscure socialist military junta, deposed King Haile Selassie and ushered the beginning of the downward spiral fall of the expansionists. Meanwhile, the Derg aspired to become the Cuba of Africa and found a godfather in the Soviet Union that embraced it and provided it with war toys of all sorts.

The Derg brought an end to the age-old feudal system, and despite its bloody militaristic nature, it implemented an impressive land reform policy that the downtrodden Ethiopian peasants benefited from, relatively. However, throughout its rule, Ethiopians lacked a basic sense of security–extra judicial arrest of citizens and rampant summary killings continued to be a defining factor of Ethiopian life. Corpses were strewn in all places as many suspects and dissenters were killed in front of their families by soldiers trained on Bolshevik violence. But that was not what brought the Derg down.

The most serious challenge to the Derg came from the Eritrean revolution which had a decisive role in bringing down Haile Selassie who was finally deposed by the Derg. But the new rulers made a grave mistake by choosing to continue the Haile Selassie  scorched-earth policy in Eritrea. In time, the Eritrean rebel organizations embraced the Ethiopian rebels and provided them with training, safe haven, and logistical support. By the mid-eighties, the Ethiopian rebels (led by the Tigrai rebellion) became well-developed they started to embrace, train and support other Ethiopian rebel groups. Thus, the precursor of the current ethnic based political parties, the EPRDF, came into being and gained prominence, acceptance, and effectiveness. Lemma, Abiy, Gedu and many other Ethiopian politicians are a product of the above genesis.

Last year, the energetic Abiy made an impressive appearance and caught many people by surprise. He gained immediate popularity due to his Hollywood styled persona, public-speaking credentials, his sweet words, his blunt statements bordering on rudeness, and his sophisticated nerve tickling massages. As more people became mesmerized by his messages, his Ethiopian critics said, “he has lost control of his ego and is considering himself a teacher in a classroom where the Ethiopian people are his elementary school students.” Worse, his Eritrean critics said, “he considers Eritreans the property of their tormentor, the dictator Isaias Afwerki.”

Meanwhile, Team Lemma found itself on a destructive path that is putting Ethiopian unity at risk.

Isaias didn’t’ lose time  to capitalize on the situation. However, many Eritreans knew his goal was not about the people or the security of the region—he is focused on the destruction of his nemesis, the TPLF. In pursuing that goal of destroying the TPLF, he wouldn’t mind if the entire region was turned into ashes. And that is still his individual cause, not the cause of the peace-loving Ethiopians or Eritreans.

Isaias has a vast knowledge of Ethiopian history and politics (who doesn’t?) and was confident he has enough leverage over the Oromo constituency through Abiy and others. But he also knew the Oromo would not be that effective in damaging the TPLF. His second bet was the Amhara constituency; he forged a quick alliance with Gedu Andarkachew and his expansionist constituency. Thus, he devised a two-pronged strategy for the purpose of destroying the TPLF:  keep a balanced relation with both Abiy and Gedu, but finally swinging towards Gedo who championed thorny issues over territorial claims with the state of Tigrai.

Abiy was quick to realize the danger of losing Gedu’s constituency, thus, he moved frantically to appease Gedu’s on his expansionist agendas. That is the reason why he never mentioned Eritrea as a sovereign state, did nothing on the border demarcation though he skillfully manipulated the public opinion and spread a wild euphoria over the region. Thus, he gained local and international acclaim to the extent that some emotional Ethiopians and Eritreans toyed with the idea of nominating him to receive a noble prize for peace.

In the meantime, the Abiymania craze is fast losing its luster. Ethiopian Journalists who were intoxicated by the Abiy elixir are coming to their senses—after one year, the curtains are drawn, the spectacle, styled like the USA election is about to end.

Meanwhile, violence is continuing unabated. Ethiopians are being displaced by the millions. The economic boom that Ethiopia enjoyed over the last two decades has lost much of its appeal and energy.

Fortunately, Ethiopian politicians have started to think soberly; what went on for almost a year didn’t solve the root causes of the country’s perpetual crisis. The Oromo have a serious territorial and cultural grievance that they want resolved. The issues of the Somali state, the Sidama, and the other minorities cannot be appeased by cosmetic changes anymore. Ethiopians in every corner of the country want full citizen-rights, the youth wants jobs, the business community wants security, the common Ethiopian is anxious of the ongoing neo-liberalist economic policies, and Tigrai is existing as if it is a different country, psychologically separated from the rest of much of Ethiopia.

In modern history, Abyssinia (Tigrai+Amhara) has been the cradle of modern Ethiopia. Historically, both controlled the reign of power, though the rivalry between the two remains a perpetual malady from which Ethiopia has not freed itself. Team lemma has failed to recognize that problem. In addition, the political situation has aroused strategic thinking among the Abyssinian elite, the proverbial Habesha, particularly Gedu’s constituency, regret their mutual animosity with Tigrai, a hindrance that would deny them the trophy of ruling Ethiopia. That’s why some politicians are lamenting, “we didn’t push away Tigray (TPLF) to replace it with Oromo (ODP)!” It’s that elite shift and awareness that prompted the removal of Gedu from the top position of the ADP, the president of the Amhara state. Now he is an outcast, perceived to have spearheaded or aggravated the Amhara-Tigrai conflict.  So, the third leg of Team Lemma, Gedu Andarkachew, was pushed out. And it is too soon to see what changes the leadership of Dr. Ambachew Mekonnen will bring. Nevertheless, the entire region came to age suckling on the over inflated ethnic pride, breast-feeding on Zero-sum game milk, and it seems they are not ready to leave that path.

When Isaias visited Gonder, Abiy declared that Isaias’ grandfather was buried there and gave the PFDJ-Gonder alliance a boost. But now, the Isaias-Abiy relation is becoming lukewarm, and Abiy is torn apart because his Oromo constituency is not interested in the PFDJ-TPLF squabbles. Also, losing the support of the Amhara elite will tilt the balance against Abiy’s policies. Therefore, due to his fear of losing his influence over them, he keeps teasing the Gedu constituency with red meat: Red Sea, Eritrea will be back to the fold of Ethiopia, naval force, railways, etc.

Finally, the Ethiopian elite is recognizing the face of the man who sat on the three-legged stool, and it is why it broke the third leg of the stool: Gedu. However, free Eritreans have a different view on the entire onslaught unleashed on them—and the following is a humble advice on behalf of like-minded Eritreans.

May reason and peace reign in the region–mainly in Ethiopia