Posted on October 29, 2022 by Beyan Negash in Articles 0 Comments 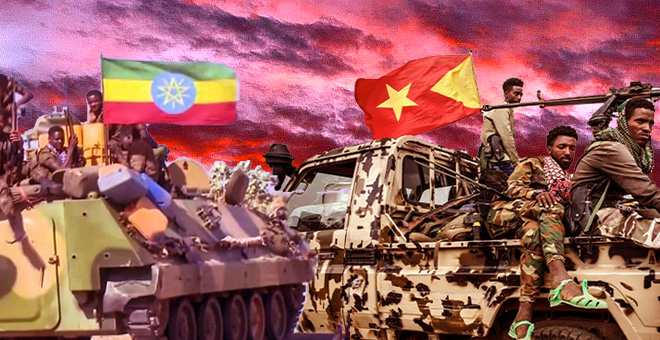 As many arrows, loos’d several ways,
Come to one mark, as many ways meet in one town,
As many fresh streams meet in one salt sea,
As many lines close in the dial’s centre,
So may a thousand actions, once afoot,
End in one purpose, and be all well borne
Without defeat!
Shakespeare’s Play: Henry V

As the stanza above summarizes it, the warring factions from their respective spaces are meeting in one town. So many hundreds and thousands of “actions once afoot” are “[e]nd[ing] in one purpose and be all well borne Without defeat!”

Therefore, blaming, and counter blaming, arguing and counter arguing, insulting and counter insulting will never get the desired results. The desired results are and can only be made by the facts on the ground. At this junction, TPLF is agreeing to talks from a weak standpoint. That fact is based on the significant losses it incurred akin to the 1998-2000 war between Eritrea and Ethiopia. The former settled for a 25 kilometer in its territory to be the demarcated line because Eritrea was negotiating from a weakened standpoint, territorially speaking that is. As such, the outcome may disfavor TPLF. Those who encouraged TPLF to gamble by directing all its arsenal power toward Eritrea during the third round of war must not only be ready to accept but have moral and ethical obligation to encourage it to settle for a lasting and peaceful solution even if that meant for TPLF to settle for less.

It ought to be understood that no amount of righteous indignation can change the facts on the ground. No amount of invoking Providence would change the present situation; the trajectory, however, can be shaped to favor the people of Tigray if the negotiating leaders on all ends think beyond their narrow interest of staying in power at some capacity. If they think what favorable outcome the people of the region can amass considering the colossal loss incurred by all the people from their respective warring factions, they will have done a potential right to the wrong path they all chose to lead the people when they chose the war. Now, it is time for their mindset to be set toward a lasting PEACE.

(1) a process for Palestinian self-government in the West Bank and Gaza,
(2) a framework for the conclusion of a peace treaty between Egypt and Israel, and
(3) a similar framework for peace treaties between Israel and its other neighbours. The prime minister and the Israeli Knesset agreed that a transitional self-governing Palestinian authority was to be elected to replace Israeli political and military forces in the occupied territories.”

Therefore, the peace talks being negotiated in South Africa should not just bury the hatchet between Tigray and Ethiopia but come up with a framework that should open the door of peace talks for Ethiopia to build its peace agreement with Eritrea on what it already had made in 2018. In other words, the peace negotiations should have some sort of framework that would inculcate the peace agreement that Ethiopia and Eritrea have had under the Abiy Ahmed administration.

To the Supporters of TPLF:

This here is a period of “racking pain” This here is a great deal of anguish producing time. This here has had “raged disillusions, chaotic turmoil”. These kinds of feelings will invariably invoke the name of the Providence to entrust in Him to do right or assault Him for letting people of Tigray to suffer. There has been and there will yet be substantial amount, as it were, besought[ings] from these preachers of the remote sort who will unload on whoever reads to invoke their rapturous – morally tinged – whiplashes of “your conscience will haunt you” until the Kingdom comes, kind of writings will not take us far. Their wrath comes down like weeds tumbling down without any center to hold it together. The kind of righteous indignation with extravagance bordering the gospels of Sunday sermons; when hell and fire; heaven and paradise spread faster than gas leak from a pipe leaving one astonished to the dogmatic certainties with which they spit their wrath, flavored with fervor of the pie in the sky type is meant to awe and shock. With shock, blistered eyes the supporters will feel anger, disgust, and hate in our hearts. Directing those feelings toward individuals who may deserve it or will NOT unfasten what had already happened on the ground. We all need to wise up and cut our respective losses and find a lasting solution, rid ourselves from this madness that goes back for decades.

To the Supporters of EPLF:

This here is a period NOT of gleeful happiness. But a time for reflection and serious soul searching we all must do. Eritrean people have suffered enough in the last sixty years. There must be a better way of solving our neighborly problems with all our neighboring countries. New ideas must be borne out of the undue suffering the people of Eritrea had to endure for several generations now. War ought to be a last resort and NOT the first one we jump to and keep supporting the regime in Eritrea. It is time we begin to demand some orderly semblance of governance, at the core of which there should be the rule of law. Period. A fight for injustice is like a white pillowcase, the second our head wishes to fall on, whereupon we notice a smallest amount of dirt on it, we pause because such a speck of dirt dots un-otherwise clean space of rest. Per Awate.com report, the recent arrest of Abba Fikremariam Hagos is a stark reminder, a stain that won’t allow us to stay silent in how “Eritrean security officers whisked away the bishop of Segenity Dioces and took him to unknown location. Nothing has been heard from since.” This is an unadulterated reminder, we have a lot of work that we need to do in demanding the change in the system that is in existence, which has outlived its shelf-life of ruling the country.

Truth be told, no matter the explanation. Never mind the analysis, everything we say or write at this point should feel inanely insufficient. This war one hopes will be the last one we will see in our lifetime. There are so many Eritreans, Tigrayans, the rest of Ethiopians who have chosen silence. Silence is not based on ignominy; rather it is because of magnanimity. The inanest part to it all is that no matter what one says or writes, it seems so inane, so trite, so trifling, so trivial that leaving it all alone appears to be the best option under the circumstance. But when the TPLF supporters kept going to the extreme is when some voices began to emerge to countervail the madness. No amount of verbosity can cut human beings to pieces. We are not “retired on duty”. We are duty bound to protect Eritrea’s interest over anything else, including over its unvoted leaders. By default, these leaders are at the helm of political power in Eritrea, supporting the war efforts in fending off the TPLF onslaught could be interpreted as supporting everything that the regime had done in the past or that it continues to do so now. There is no avoiding that perception as there is no avoiding the same perception of those who try to ride the wagon off TPLF’s back to rid the regime in Eritrea from the helm of political power. Here, too, Eritreans will say, what befallen the people of Tigray is what you are wishing on Eritreans. So, there is the quagmire of shackled ideas getting in the way of seeing matters clearly and unambiguously.