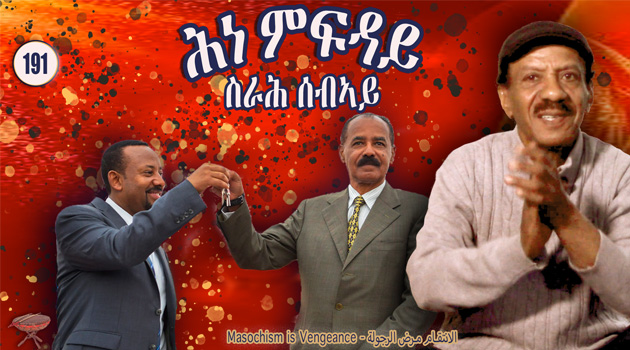 For centuries, the Horn of Africa region has been plagued by a violent culture of war. And almost all wars are motivated by vengeance (Hne mefday). It’s the animal extinct in human beings, the Darwinian survival of the fittest. Nations explain it by saying, “If we let a tribe get away their aggression, they will be repeat it.” The seemingly proper deterrent becomes a vicious circle.

Hammurabi devised the oldest written code of law in history, an eye for an eye a life for a life, cutting the hands of a son who beats up his father? Maybe that was fit for the times but times change. Gradually, ancient laws were replaced by religious codes. Thus, the Middle East and its peripheries accepted the Old Testament. Followers of the Abrahamic religions still adhere to it, and it still influences modern legislators while fringe religious fanatics use it to wreak havoc in the region. But ancient laws do not serve the modern times.

For instance, it encourages vengeance (not legal retribution) which gives life to social destruction and results in never-ending bloodshed.

Humanity developed modern laws that govern all human beings equally, regardless of their race, sect, or region. It developed courts, local and international laws, protocols, universal code of ethics and morality. However, it has so far failed to solve the problems of the world. Human being’s instincts disobey unfair laws. What is fair and unfair in inbuilt in the human psyche.

Many nations are so proud of their traditional laws. However, they are primitive laws unfit to govern a modern life. But conservative (and nationalist) elements believe traditional laws are the best that man ever created.

In a tweet a few days ago, the PFDJ ambassador to Japan boasted about the Eritrean traditional laws, ‘we had environmental laws long before the West knew it.’ One is tempted to ask: Then, why is the temperate Eritrean highlands so barren with only some shrubs left? Where is the Sycamores, Olive, other trees that once filled the land?

Laws are only good if they are functional and safeguard the values they supposed to protect (within context). However, Eritreans cannot boast about perceived enlightened laws when there is nothing to show as proof. But when an ambassador makes such preposterous claims, it shows where the nation is heading.

Though many nationalist elements will claim otherwise, ours is a primitive society, left behind in the race towards civilization if we are in race to begin with. We need to look at the mirror…

In Greek mythology, there lived a man named Narcissus who once came upon a pond and saw the reflection of his face on the surface of the water. He was so captivated by the beauty of his face, he didn’t want to part it and finally dropped dead while admiring his face. A flower grew on his remains—the flower is named after Narcissus. In our region the name Narcissus is adopted as female names: Nerjis and Nardos.

The moral of the story of Narcissus is: Beware of being self-absorbed and adoration of the self …

Mirrors are also symbolical for Sufis, mystics. Spiritualists, philosophers, and poets have used mirrors to explain the dimensions of God that we do not see but observe in ghe mirror of our hearts. Art is also “like a mirror that portray the facts of the world.”

Social critics are like mirrors, essential for the development of societies. We check the mirror to see if we have any faults in the way we are dressed, or, if to wipe off food remains on our face, and to see if our hair is properly groomed, etc. But we take care of faults we see on the mirror. However, we don’t thank the mirror, scold, or heap insults to it because it showed us our faults! Conversely, writers must be treated like mirrors; if you they tell you what’s in your face, like a mirror, you can ignore them or be aware of what they tell you and act on it. Social critics encourage you to be open, think critically, and move on without insulting them.

Another abhorrent tradition is the obsession with revenge whose best example is the TPLF-PFDJ feud fueled by rivalry. Such primitive culture and tradition are the causes that condemned our region to remain a backward society.

My picture with Meles Zenawi

There is someone who pesters me with comments on many of my videos. I once asked him what I have done to him to be this vile and combative against me? He said he or his relatives were deported from Ethiopia during the time of Meles Zenawi. And I have taken a picture with the late Ethiopian Prime Minister Meles Zenawi. He never mentions that the pictures were taken while I interviewed him for awate.com!

Imagine the late British-Irish journalist, Robert Frisk, who interviewed Osama Bin Laden several times was from our region? Christian Broughton, the managing director of the Independent said Frisk was, “determined and utterly committed to uncovering the truth and reality at all costs.”

If he was from our region, he would have been branded a terrorist bankrolled by AlQaeda!

Meeting a prime minister is not easy. You don’t knock on the door and ask: can I interview you? I worked hard to secure the interviews; and anyone who has a basic understanding of journalism would consider it a scoop. Check the links if you are interested to see the contents of the interviews. But the man is euphoric by latest battles in Tigray, he is a novice and doesn’t know that wars do not end, only cycles stop periodically. It’s a….

In Negarit 153 I tried to explain the nature of the current war in Ethiopia; there are battled and there are wars. The battles of the last three or four years are being fought inside a war, and that war is part of the 850 years old war that was ignited and reignited every generation or so. If you believe a war, even a battle, will be the final solution, you are clueless. You need to sober down. However, one way or another this war will end. But ending the ever-present war requires social development, change in the way people think, when the culture and traditions are cleansed, mythologies are busted, and feuds are resolved.

Do you think there will be a victor in this war? Any victory cannot compensate the losses of the entire region. Even if the goal was to stay in power, we know is not everlasting, and no power is worth that much bloodshed. But some people consider wars like a football match, they are excited with every goal on their rival team’s net and drop their ears like a sad dog whenever the rival team scores. Like drug addicts, they get an instant high with every drop of blood, and soon are down. Then they go in search of another drug fix—more bloodshed. It’s all driven by vengeance; some institutionalized in the form of feud and vengeance, others personal grievances that they express in childish manner. They have no qualms provided their sick thirst for vengeance is quenched—regardless of the victims. They would not care if millions perished so that they can get their moment of high, like any addict, like a drug junkie.