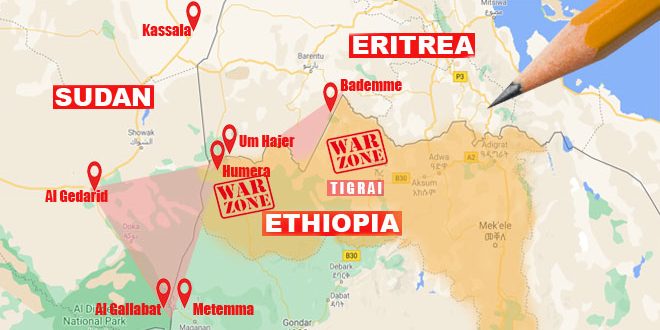 Triangle-shaped structures are sturdy but also simple. In 1998-2000 war broker around the Eritrean village of Baddme, in the area the Ethiopians called Yirga Triangle. And today the initial devastating results of the current Ethiopian ethnic war is seen in a triangle whose three corners are the towns of Humera and Mettema (Ethiopia), Gellabat and Al-Gedarif (Sudan). Since last week, refugees continue to flee their war-torn villages to that triangle on their way to unknown future. Would they be able to return home or scatter everywhere like earlier refugees? Will they meet their lost and separated loved ones again? No one can tell. But we can tell the region will go through many years of social paralysis just like the state the region lived since the end of the Ethiopian-Eritrean war of 1998-2000.

The above quote is attributed to prince Klemens Von Metternich, the famous Austrian diplomat who died in 1859. Had he lived post-WW2, he would have mentioned America instead of Paris. And America has caught cold many times causing Eritreans to sneeze, just like they are sneezing after America caught cold due to an election drama caused by narcissism.

For Eritreans, the current political and military situation of the region is a replay of the post-911 tragedy. However, this time the flames of the raging battles could burn the entire region of the Horn of Africa.

On September 18, 2001, just a week after the 911 incident, the Eritrean government silently arrested senior government officials, the staff of the nescient free press, hundreds of civilians, religious leaders, and scores of dignitaries. That happened while  the attacks on the USA had grabbed world attention. By the end of the year, the ruling party’s leader Isaias Afwerki has removed all the veterans of the struggle era who could challenge his rule; he became an absolute dictator. Months went by before the world media redirected its attention towards Eritrea. Twenty years later, in 2020, some of the arrested persons have died in prison while the rest have disappeared in the maze of the Eritrean ruling party’s prison system.

On November 3, 2020 as the world was focused on the US presidential race, the Ethiopian prime minister Colonel Abiy Ahmed declared war on Tigrai though he claims it is against the TPLF, the ruling party of the Northern Ethiopia region that  he and his “Prosperity Party” consider a terrorist organization. On November 4, the Amhara regional militia supported by the federal forces launched a full-fledged military attack on Tigrai. The war has since spread to include many battlefronts inside and around Tigrai.

The antagonism between the regional Tigrai and the federal Ethiopian governments gained steam a few months after Colonel Abiy Ahmed came to power in April 2018. By September it became irreconcilable when Abi postponed the Ethiopian parliamentary election for August 2020 citing the Covid19 pandemic. However, in June Abiy further extended the national election by about a year, provided by then, the health authorities declare it is safe. However, on September 9, 2020, the TPLF defied the decision and went ahead and held a regional election where it announced it won 98.5% of the 190-seat regional parliament. The federal government considered the Tigrai government illegitimate, and in turn the TPLF declared the federal government as illegitimate and doesn’t have a mandate to rule since its term has expired. In retaliation, the federal government took drastic measures to choke the Tigrai government financially, and a fierce propaganda war ensued.

On October 14, Isaias Afwerki of Eritrea made a surprise visit to Ethiopia and toured the Ethio-Engineering Group that produces vehicles for the Ethiopian military, the GERD Nile dam, and the Ethiopian air force base. Meanwhile, The  USA election was days away and occupying world attention.

On November 1, 2020, armed rebels massacred over 50 civilians from the Amhara ethnic group in the restive Oromiya region. In an ethnically divided Ethiopia, they were ethnically profiled for being Amharingna speakers in a non-Amhara region.*  Government official blamed the Oromo Liberation Army (OLA) for the massacre that, according to reports, happened just after the federal security forces departed leaving the area unprotected. However, Ethiopia has been marred by violence since Colonel Abiy took power; the massacre of the 50 Amhara civilians was one in a chain of massacres that ravaged many parts of Ethiopia.

As soon as he took power, Abiy Ahmed explicitly stated his goals to reform the Ethiopian government and to spread peace all over the country. However, parallel to his stated goals, he made it clear that his intention was to destroy the EPRDF coalition. Soon, the goal narrowed down to the destruction of the TPLF which was instrumental in creating the EPRDF coalition. He began to hunt down senior members of the TPLF in all parts of the country. And the government media tried them before the courts could say their word. Partisan videographers accompanied the security forces as they humiliatingly handcuffed and arrested TPLF members, some inside their bedrooms, scenes that were widely broadcasted. According to an observer, “a showbiz replica of arrests that inspired many ethno-centrists to consider it a license to openly practice racism against the Tigrayans in general.” And Abiy cornered the TPLF in Tigrai and cut it off from the rest of Ethiopia.

Colonel Abiy executed his final assault on the TPLF when he formed the Prosperity Party on the ruins of the EPRDF; it assumed the role of the dissolved ruling EPRDF coalition. He heightened the tone of his vitriolic speeches and incendiary rhetoric against the TPLF. And in an ethnically divided country, his statements incited populist sentiments exposing many Tigrayans to serious abuses. Abiy further coined a code, “ye-qen jiboch” (daytime wolves), to describe the TPLF leaders. The media, both official and partisan, picked the pejorative term and used it liberally against Tigrai. The TPLF, whose members Abiy accused of enriching themselves through corrupt means, taking control of the state corporations, and other criminal schemes, became open targets. And the ethnic gap among Ethiopians is still widening.

The Sound of Guns

The current conflict escalated when Militias from the Amhara region attacked territories they claim the TPLF forcefully incorporated into the Tigrai region. They were determined to take over the territories. As the Militias marched into the Welkait-Tsegede region, many civilians lost their lives, others were uprooted, or their properties were destroyed, and families were separated. The federal air force and artillery joined in and further damages followed. To date, Sudanese officials reported over ten-thousand refugees have arrived from Ethiopia and they expect another 200,000 thousand soon. They hosted the refugees in the Shegerab refugee camp where tens of thousands of Eritreans have been stranded since many decades.

A few weeks ago, in preparation for the battles in Tigrai, the federal government arrested many reporters and journalists and ordered several media outlets to stop operating. In addition, Internet connection was shut off in Tigrai. Now, as the battles rage resulting in severe human and property loses, the absence of a free media has enabled the government to monopolize the discourse and control the flow of information. The only news available is spread by the government mouthpieces that are engaged in a frantic propaganda war, talking about battles and not the war.

The usual military push and pull, losing or winning battles, does not determine the final result, a war does. But then, there is no winning in such a war—the warriors will finally stop fighting but the people will lick their wounds for a long time—if (and after) the war stops.

A scholar from Addis Ababa who didn’t want to be named said, “The most disappointment thing is that the West is enamored with dictators, if they don’t find any, they make one—why did they award a Nobel prize to an untried and unknown quantity like Abiy?”

The remark explains what emboldened Abiy. Peace making is a process and cannot be achieved without the participation of the stakeholders. Abiy making a private deal with Isais Afwerki amounts to nothing more than two persons having a chat over a cup of coffee. Furthermore, Abiy’s policies are reminiscent of the ancient Ethiopian rule of “divine ordained emperors.” He has no respect for the rights of the people of the region; he wants to put them in a smelter to come out from the other end ready to be added to the super-Ethiopian-identity of his choice, in an illusionary nation he dreams of lording over. He expects the people to drop their layers of identities and meltdown in the super-identity that his team of elite functionaries and allies has chosen. But it is impossible to visualize that happening even theoretically, let alone become a reality. Thus, Abiy is leading the region back to the old Abyssinian modus operandi of endless wars. And as they say, “if you undeservedly pamper a soldier you produce a dictator.”

*They are called Neftegna, a pejorative term used to describe people who settled in a region with the might of rifles. Even if the Amharas have lived in the place for generations, they will rarely be accepted as citizens with full rights..

The PENCIL is awate.com's editorial and it reflects the combined opinions of the Awate Team and not the individual opinion of team members.
@@awate2
Previous A Book Review of “Desecrators of the Sacred Trust”
Next What Follows Condemnation?