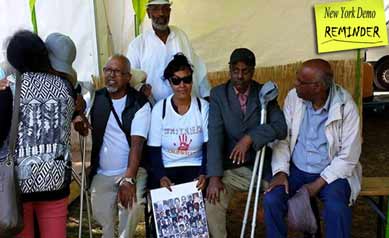 Earlier this summer Eritreans the world over spoke in unison in their unequivocal support for the UN commissioned CoIE report, to which overwhelming number of Eritreans voted with their feet, literally, as they marched the streets of Geneva, in the thousands. Who could forget the 26 of June show of force when young and old, expats and former veteran fighters, make that disabled Eritrean veteran revolutionaries who walked the walk and talked the talk. The vivid memory of the image you see accompanying this article captures it all and it will forever be etched in our collective memory banks for years to come. But, more importantly, history will record it in which such an image will evoke a sense of pride in our progenies who will know that Eritreans never rested when their youths were suffering in real time. Not only Eritreans never rested but were fighting the reprehensible regime in the homeland holistically, through demonstrations, electronic media outlets, by any means necessary to let it be known that Eritreans never kneel down whether the enemy is from within or from without. In fact, it will come to shine a light that the Eritrean spirit might be battered but never wavers, it bounces right back when the circumstance become so vile and so wretched for their countrymen and countrywomen, Eritreans the world over and from all walks of life speak out in unison irrespective of our differences. And so Geneva turned the history page like nothing before it and New York will reciprocate in kind.

The aftermath of such massive demonstration left the regime in Eritrea panicking and running for cover while its loyalists were left in tatters not knowing how to weather the resolute storm; the pressure kept mounting until they were caught bare for all to see when they feebly attempted to threaten the Special UN Rapporteur, Ms. Sheila B. Keetharuth who has been assigned to investigate and interview Eritreans who were either witnesses of crimes against humanity as perpetrated by the regime in Eritrea or were its victims. So, both the regime and its loyalists were caught naked for all to see, as it were, it was not only nothing more than an Emperor with new clothes whose loyalists refuse to see that it has been bare and naked, yet to an average Eritrean it is a Wolf in Sheep’s Clothing, part of the lyrics that come to mind: “So tell me how you’re sleeping easy/How you’re only thinking of yourself/Show me how you justify/Telling all your lies like second nature/Listen, mark my words, one day/You will pay, you will pay/Karma’s gonna come collect your debt” (from the lyrics of William Beckett).

One does not need Beckett’s lyrics, however, to know that the regime’s days are numbered and that it is on its last throes, the defection of the ten soccer players is one glaring example of the regime’s tortuous responses, in which it not only tried to coerce Botswana’s government officials, but the Imbecile in Chief (so called Ambassador of the regime), when all of the tricks in his trade failed, get this, he defaced and invalidated the ten players’ passports by making holes in them. Talk about a diplomat turning criminal for the whole world to see. A regime that does not know any modicum of civility in front of the world, one can only expect the worst inside the country where it has complete control.  We’ve seen individual Eritreans in Botswana standing tall staring evil down. We’ve seen EMDHR standing tall and not let evil triumph. Eritreans the world over lent their unflinching support as they fought evil tooth and nail, that’s the spirit of Eritreans that’s now reemerging to take matters in their own hands, the freedom that was stolen, it has now become unequivocally clear is being taken back by its rightful owners – THE ERITREAN PEOPLE.  The blows are coming left and right.The regime has been dealt another blow as Awate reported it just this past week.

But the most important blow is yet to come and that’s why we must come out in New York city to show our moral outrage on the regime that has caused untold suffering on Eritreans young and old.  Well, four months since the Geneva demonstration blow, we are about to enter a new phase of international law onslaught falling on the regime in Eritrea, yet again. Slowly but surely the noose is tightening on the regime’s neck; it is not only getting uncomfortable, but the chokehold is leaving it gasping for air, and the air appears to be blowing right past marionettes who inevitably and feebly attempt to speak up on their wolf’s behalf, but attempting to speak while gasping for air is just an exercise in futility – it is a lose-lose proposition for its loyal supporters who choose to pander and acquiesce rather than do the right thing. Their numbers are tapering year after year until they will either have to jump the regime’s ship and come to the opposition side or they will forever be marred and history will not be kind to those who knowingly stand on the side of evil, and the regime we have in Eritrea epitomizes it handily. But, we all know that, that’s the reason why we are communicating in this august space this week, it is all about the Eritrean sponsored 29 October 2015 New York demonstration.

Eritreans on this side of the Atlantic are now going to carry the baton that is being passed from Geneva of four months ago this year, a show of force of equal magnitude must be in the offing with one loud and clear message to accompany it where we all justice loving Eritreans stand in this regard: That we fully and unflinchingly support what the CoIE report stipulates. The CoIE’s report is one area all opposition groups and individuals can agree on. Every religion known to mankind advocates for justice as every religion does not preclude it from its tenets.  Justice does not have ethnicity as all ethnic groups know the value of justice because it is the ultimate equalizer in any society. Justice does not have gender. Justice does not have grey area. Ideally, justice is blind to all of these1. The brave soul witnesses who were interviewed for the CoIE report were all Eritreans who had seen and/or experienced the wrath of the regime that seems to continue unabated since Eritrea’s inception as a nation-state. These were brave Eritreans who were compelled to speak out by the call of justice from within. The rage that had been bottlenecked for years finally found an outlet to mete out justice and to ostensibly exact punishment against those who have made travesty of it. This is the kind of call to justice demonstration that all Eritreans should stand shoulder-to-shoulder in support of those who put their story for the world to see and hear. Above all, we stand shoulder-to-shoulder for those who are in the dungeons as we are unambiguously saying we shall not let your voice and your stories be buried until the regime is made to disappear from the face of Eritrea. Who can forget the recent revelation of Betweded Abraha’s (BA’s) powerful speech of justice, rule of law, principled man – we must speak on thousands of Eritreans like BA, we must drive out of our comfort zone to speak in their behalf. This is massive undertaking that can ostensibly bring the power to the hands of Eritrean people. The aftershock of the June 26 earthquake in Geneva, however, made it abundantly clear that Diaspora Eritreans have nothing to fear, the vampire’s fangs have no power to suck their blood remotely. The landmark date of 26 June 2015 is etched afresh in our collective memory as one that will be authenticated by history books as the beginning of an end for a brute whose malaise afflicted Eritreans from all walks of life for two dozen years.2 New York is going to yet about to bring fresh energy into that memory of Geneva of recent months.

So, all eyes are on New York now. Time is closing in. Are we ready to rock the house New York? This is no time to drag our feet, especially those of us who are in the vicinities of New York. We must stop everything that we have planned to do on the 29th of October 2015. Obviously, to those of us where attending the planned demonstration is next to impossible to do, we must show our support to the organizers who are tirelessly working to make the impending demonstration a huge success via myriad means that ranges the gamut. One way to assure a successful demonstration is by digging into our respective pockets and help in the massive logistical undertaking as everything in NY is prohibitively expensive. So, let us please be generous souls here, they will need all the help they can get. This voice is meant to encourage others to think of ways to help our compatriots in NY and vicinities to come out in droves, morally, financially, and through gestures of encouragement such as this article. Leaving you with one braved soul, an artist with integrity and courage to match.3