Posted on January 4, 2015 by awatestaff in Articles 75 Comments 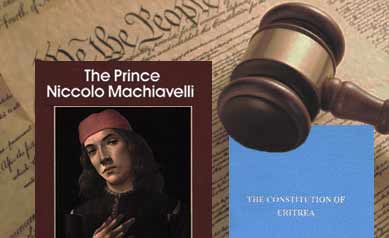 On the occasion of the new year, Isaias Afwerki was interviewed by the ruling party owned EriTV and as per the promise he gave his supporters six-months ago, he said that he has “assembled people to prepare the constitution, and that the old constitution, though [he] didn’t declare it, is dead.”

The issue of governing devices imposed by the PFDJ has always magnified the difference between the grand camp of the Eritrean opposition. However, those devices and proclamations stir little debate except when the ruling party (mostly its leader Isaias Afwerki) takes a decision concerning those devices; the debates mostly start as a reaction to what the ruling party does.

Though the “1997 constitution” was drafted under the patronage of the ruling party, some in the opposition camp have considered it a legal tool to fight the PFDJ tyranny while others have rejected it altogether.

The following assessment of the ongoing debate at Awate Forum is by the master debater and political analyst Haile who is also known as “Haile The Great.” It’s is a concise viewpoint of the opposition block on the current issue of the constitution. Haile states that he is attempting “to interject to the ongoing debate wearing opposition spokesman hat.”

A gentle detour is in order. The Eritrean opposition block is essentially composed of ALL persons, entities and organizations (Eritrean) who are opposed to the current unlawful and dictatorial rule of Eritrea by the regime of Isaias Afwerki. This principal opposition block is also connected to entities (non Eritrean) at varied levels that include governments, NGOs, int. organizations, regional organizations, faith associations, and other interested parties and individuals sympathetic to the central cause described above in a deliberate broad category. Geographically, the opposition block spans virtually the whole globe, including neighboring countries and extending to the heart of Eritrea, the capital Asmara itself.

Before delving into the political configuration of this increasingly expanding political formation that is opposed to the dictatorship in Eritrea, I need to clearly outline the key tactical and strategic parameters that are of paramount importance to the opposition block as a WHOLE in achieving its goal.

Goal: to effect the removal of the regime of Isaias Afwerki and ensure peaceful, legitimate and inclusive transition.

Guiding tactics/strategy: to expand the block as vast as possible till it is sufficiently large to swallow and bury PFDJ.

Against the above backdrop, it is important that we believe in our diversity of opinions, causes, expectations and so forth. To have such healthy appreciation of our diversity isn’t detrimental in/by itself. However, the manner in which we manage discourses pertaining those diversities could serve for/against the grand tactics/strategy of the opposition block as a whole to expand itself in reaches and bounds.

Now, what are the various component subgroups of the opposition block?

a) Eritreans who believe in 97 constitution and the preceding political development (from 93 – 97) and demand that such statuesque must be restored. This group also includes many who have paid with their life in demanding so, G-15, the late wed Ali and comrades can be few examples.

b) Eritreans who believe complete and fundamental system change needs to be effected in order to chart a brand new path. Weed out the PFDJ system in its totality, fully without traces of its ideological footprints. There is a good deal of youth, armed groups and other parallel umbrella groups that are included here.

c) Eritreans who have ethnic grievances and have elected to organize (and be armed) along their ethnic groupings.

g) Former EPLF veterans who see the ideals and promises of their front had been hijacked and are organized in various forms (Medrekh, Association of EPLF veterans…) to correct the course.

h) Youth groups (EYs..can also fall in a or b above)

As you see, such is an expansive list, differing interests and priorities. For example, “a” or “g” may not use Ethiopia as a base for struggle, while “b” and “c” may see it as a viable (and indispensable at this time) to do so. Most of the people in “b”, “c” and “d” might have fundamental misgiving of 97 constitution, where as “a”, “e” and some in “h” might see it as a viable way forward.

Hence, if any given event is considered, the notion of everyone (a – h) taking identical position is highly unlikely. That is not expected either, nor is it inconsistent or in breach of the Goal/strategy framework stated above. But as I stated above “the manner in which we manage discourses pertaining those diversities could serve for/against the grand tactics/strategy of the opposition block as a whole to expand itself in reaches and bounds.”

When the expectation is that because “b” or “c” oppose the constitution 97 (which is the bases of struggle for those in some of the other sections), then “b” or “c” see it fit to condone an illegal undertaking by the regime, or because “a” or “g” aversion to struggle in Ethiopia leads them to condone the most barbaric dehumanization of Eritreans by the regime as “sell outs”, or even when others believe one thing and expect that gives them to nullify the justifications of other to be legitimate members of the opposition block as a whole… is where things become detrimental, borderline irresponsible.

The above problem also directly contradicts and undermines the basic Goals/Strategies of the Eritrean opposition forces as a whole, it disunites the ranks and delays progress.

We need to be clear as to where we belong in the vast opposition that is proving formidable threat to the existence of PFDJ (more in some areas than others). Yet, we must also understand the local vs. global strategy in the play book. One’s own group strategy shouldn’t traverse or undermine the global strategy of the WHOLE opposition.

In the end, the opposition will result in the overthrow of the regime, and what needs to be instituted in its place is the guarantee of peace and liberty. What people wish to do with it would then be left to their individual or group choice.

I will jump straight to the crux of the matter. There is a valid point in the legality sphere. However, such could be a great impetus if we can realistically expect spontaneous and rapid uprisings. However, on the protracted nature of the struggle we are conducting, things tend to unfortunately take complex and delicate route.

1 – Let us consider the case of our brothers from the RSADO or DMELK, considering that the very defining cause of their movement is their opposition to the set up as proscribed by the 97 constitution. Could it be considered a probable outcome to expect them to trade their very existence for the expediency that you foresee? Mind you, that the Afar peoples did actually had an elaborate workshop on the very topic of constitution (I think it was in Canada and also attended by Dr. Bereket Habte Sellase who also presented us some articles about it at awate.com).

2 – We have read the ELL group, The Covenant by Mejlis Ibrahim Mukhtar, other minority groups, and established organizations that have pretty settled charters of their own. What is the incentive for them to enter the trade off**? Can we itemize the potential benefit to be had (in discrete and finite terms), and most specifically what that would mean to them organizationally? What does the promise of “legality” offer them in practical terms?

Now, I ask this without prejudice to the ongoing discussions. I do actually favor the constitution as a transitional set up, but I am more concerned on the big picture here from the point of view of maintaining the integrity of the whole opposition. And that is proving a fine line to tread.

** By trade off, I mean that they would give up their existing stated platform and adopt for campaigning for the restoration of Constitution 97.