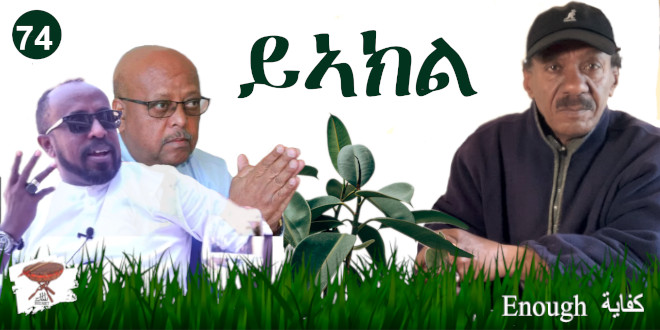 [This the source script for Negarit 74—it’s written in a simple spoken words style for casual delivery.]

ALL PEOPLE deserve stability, and Eritreans have struggled the longest time in pursuit of that.  It has suffered for centuries to attain freedom and stability. However, when the Eritreans finally achieved independence, the country was hijacked by one person who has been mistreating them for decades.

In addition, as if what Eritreans went through is not enough, they are being agitated and pushed towards a new wave of confrontation and bloodshed. We are also witnessing TPLF bravados threatening to cut the dictator’s hands. Sadly, if a conflict is ignited at the borders, both Eritreans and Tigrayans will be exposed to its fires. Today’s Negarit 73 will address this looming, scary crisis as well as the controversy that is raging around Awel Said’s poem..

It’s of paramount importance that both peoples tell their leaders to tone down; only the people can guarantee their safety and establish peaceful coexistence.

The foolish Eritrean leader, Abi Argen, has not quenched his thirst for more blood, which he has always satiated by sacrificing the people he despises.

It has been 45 years since he started his confrontation with the TPLF, the leaders of Tigray. And in his attempt to get even with them in his personal mission of vendetta, he is likely to push Eritreans into a fresh cycle of wars. Twenty years ago, a confrontation that had the village of Badme as the flashpoint, cause the death and incapacitation of many innocent Ethiopian and Eritrean youth. However, Abi Argen didn’t feel any of that, but he shamelessly declared “we lost nothing”! His arrogance has reached his nose tips and he still refers Eritreans and his country in the third-person. He never referred to Eritrea as ‘our country’ but “this country”. He never referred to the people as ‘my people’ or ‘our people’, but “these people.”  In short, he considers Eritrea as his private ranch and its people as his serfs. Worse, as the people are hoping for peace to reign in the region, he continues with the attitude agitating for more confrontation with the TPLF—a war in which the people will be used as fuel.

The TPLF leaders are still threatening to teach him a lesson. However, they are collaborators in elongating the suffering of the people because they have failed to resolve the long standing border issue on which the Ethiopian-Eritrean border commission ruled in the Hague. Any sane person would have though, after two decades, the case would come to rest. If the TPLF leaders love and respect Eritreans as they often declare, they should bring the border case to an end. But so far both leaders failed to do so and it’s time to hand over the border case to the residents of the conflict region…they know their land, their villages, their farms and they will definitely find a resolution to the problem.

So far, the last war has denied the people meaningful development as they are still ling an unstable life, denied a normal life, surviving in abhorring situation after 20 years of their lives were stolen due to the leaders’ personal; grudges. And now, instead of learning from. The mistakes of the past war, cadres of both regimes are agitation for a repeat of that tragedy. The last time the people failed to prevent that because they were drunk with the spirit of sloganeering and encouraging the leaders to take them to the slaughterhouse. This time, they have to reject the war in unison. They should challenge the leaders to follow a peaceful means to resolve the crisis. If not, the leaders’ thirst for blood will never be quenched. The people should not cheer any clownish performance, such as they did at the flirting ceremony between Abi Argen and Abiy Ahmed.

Importantly, Eritreans need to end Abi Argen’s gambling with the life of the people. And from the ashes of the present regime, a new system that respects the rule of law and is restrained by the laws of the land should be established. And for the people of the region to live in peace, the ambitions, vindictiveness, and insanity of the leaders must be controlled. But Eritreas have an observation on the attitudes of the Tigray elite.

The main defining attitude of Tigrayans towards Eritrea and vice versa, is the often remembered primordial bias and grudge against each other. That must end.

Between 2008 and 2011, I met many top leaders of the TPLF. Today, I think the noble value that many of them carried from the struggle era is eroded. Progressive, peaceful messages have been replaced by worrisome conflicting statements. For instance, the aggressive statements by General Tsadqan who openly calls for war to secure Assab even by force.

I am afraid many some are also stuck in the in an experience that ended forty years ago. We know that history is written by the victorious and that is why TPLF leaders are accusing the ELF of collaborating with the Arabs and interfering in their affairs. But they forget the ELF was primarily targeted by the Arab Saudi Arabia, which created the perception that the ELF was a “communist” organization that must be finished off. That was accomplished that through a conspiracy between the Saudis and Numeiri of Sudan. Worse, the military executioners were the EPLF, the precursor of the present rulers of Eritrea (PFDJ) and the TPLF, the rulers of Tigray who are smearing the noble struggle of the ELF. They are the conspirators who are now peddling their destructive actions as an altruistic mission! But an executioner cannot be a credible witness in a case in which he is the main culprit. But this episode is not on that epoch, let’s leave it for another time

Aboy Sebhat  said that the Tigray-Tigrigna crowd are Banda, and I fully agree with him on that. But I do not like using that term since I know how the  supremacists (Neftegnas) of Ethiopia use it. We can call them Militia Sernay (Wheat Militia).

Now we come to the current punching bag— Awel Said, the Jeberti! I am mentioning his group affiliation because that is what the few bigots are picking on. A decent criticism of Awel as a public figure on his own right, as an exceptionally talented poet, an accomplished artist, is valid. When one is in the public sphere, criticism comes with the territory. But defining an individual based on his group affiliation, be it religious, nationality, or region, and not on views and actual actions, is bigotry.

But where does that never-ending victimization of Jeberti come from? It has its origin in the Abyssinian indoctrination of anti-Muslim rhetoric that has been going on for centuries. This issue embarrasses me because I spent my life struggling for all Eritreans. And many criticize me of ignoring the Jeberti vilification because I don’t usually raise their issues as I do when others are vilified. I don’t do that because the Jeberti do not need my defense, or the defense of anyone else for that matter. What should be known about them is that they never betrayed Eritrea, never collaborated with its successive enemies. They are known for always focusing and pursuing a civil, pious, and virtuous life. They strive to sustain themselves by becoming excellent businesspeople, cooperative, aspiring to achieve education, to acquire skills that help them earn an honest living and prevents them from want. It’s natural that their character attracts envy, jealousy and enmity by the bigots. They do not need my defense.

On this occasion, let me remind you of something significant. All Eritreans have a warrior culture–not the Jeberti, unless marginally influenced by the people among whom they live. They are the only group who does not have sword and spear dances in their wedding and other celebrations. Theirs is a simple culture, mainly influenced by Sufism. They are obsessed with diligently spreading peace. That makes them appear different from the culture of war, which they abhor because they have historically suffered the most from it. They are overly patient. Culturally they understand the essence and importance of respecting diversity and coexistence because they abhor mayhem and bloodshed. If that is a negative aspect of humanity, anyone who feels they should be insulted on those characteristics, their insults are welcome.

However, they have the ability to protect themselves—they have their glossed over history in the long struggle for Eritrean independence, never left their ranks, spied, or betrayed their colleagues. And they also know how to forge alliances with clean, honest and just people. And that has become the main points on which they are attacked, in a Carl Rovian method of trying to turn their strength into a weakness.

I heard of Awel a while ago; I watched one of his recitals. However, his latest performance, and his moving poem is just magnificent—if not for anything, for the way he delivers it.

I admire and enjoy poetry, giants like Wedi Bashay, able poets like Kiros, and many others. I consider them the holders of the Legacy of Echet Henna who disappeared in Keren in 1977, wed Amir, and the unmatched poetry of Akelu Guzai that has produced many orators—that should be kept alive. Awel is a fine poet and his delivery is the best I have heard so far.

His crime? Some in the justice camp might have expected him to shout “Down-Down Isaias” from the stage while performing inside Eritrea! Maybe they want everyone to leave Eritrea so that he can be accepted by them! What if he doesn’t want to leave his country, is that a crime? Okay, a tiny fraction of Eritreans left to join the struggle for independence, but the rest stayed in their country—where they treasonous?

I wish everybody stayed at home. I wish they find a way to stay inside. And I wish those inside would act to make Eritrea livable, accepting all its children who are exiled involuntarily or forcefully. For myself, I do not wish anyone to return to an empty Eritrea but one that is crowded with its people. And I do not admire those who think they are the only patriots simply because they fled Eritrea. That is not a carte blanche of patriotism—people are judged by what they are doing about the Eritrean predicament. And if they are not doing anything, are they harming Eritrea? Still, if they are benign (not in the ranks of the nHna Nsu crowd), I have no problem with them. We should focus on those who are jailing and mistreating our people, and encourage the rest to act from inside Eritrea. They do not need to leave their country just to be accepted by some egoistic diaspora, they are Eritreans where ever they chose to stay.

Awel, I wish you would produce more inspiring patriotic poems, though I would like you to distance yourself from any message that agitates for more confrontation among Eritreans, whatever their position. I wish you would tone down on the “Weyane” rhetoric because war is destructive and we are still crippled by the outcome of the last war. WE shed enough blood and that should be enough. Don’t badmouth your compatriots because they are not in line with the regime of Abi Argen. Don’t undermine those who are struggling against injustice to the best of their ability. Indeed Yiakl. Yiakl for injustice. Yiakl for warmongering. Yiakl for disunity. ENOUGH to regionalism, sectarianism, and clannish segregation. I wish you would echo the victims call for justice. Please produce more patriotic, sane, peaceful, and inspiring poetry that unites the people—the division of today is artificially sustained to elongate the power grip by a few. We love our country and people. As for me, I think I love my country and people more that anybody else walking. But that is me.