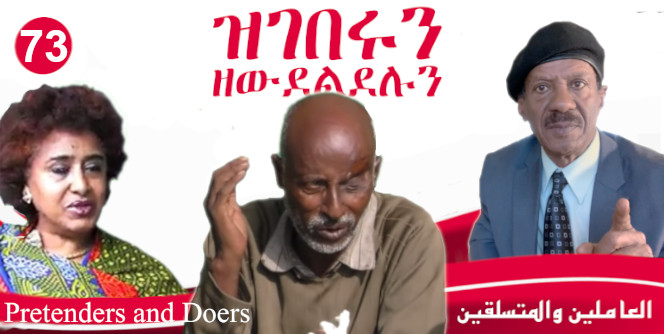 [This is the source the transcript of Negarit 73, published by Negarit Youtube channel]

Most of the time we consider cartoon movies fictional and made for entertaining children. We seldom remember the cartoon stories are ancient legends that originate from religious beliefs. Those of you studying business, marketing and finance may know the sources of today’s brand names. Their origin is also legends. For instance, Amazon, Atlas, Apollo,  Ajax, Echo, Delphi, Mars, Nike, Hercules, Oracle, Orion, Olympus, Phoenix, Pandora, and many others that are names of legendary deities, mythologies, mostly Greek, but also Egyptian and Babylonian.

The Tale of Two Brothers is an ancient Egyptian legend. The two brothers are Anpu, who was married, and the younger Bata who was not. Anpu’s wife attempts to seduce Bata, he rejects her advances. She was angry and tells her husband that Bata attempted to seduce her and beat her up for rejecting him. Anpu was furious and wanted to kill Bata who seeks protection from Reharakhti, a deity who creates a lake infested with crocodiles, to prevent Anpu from getting to Bata. From across the lake, Bata tells his brother his side of the story. He also tells him  he will wander around and leave his heart on a sapling of a tree. He asks Anpu to look for him when he sees a sign: a foaming jar of beer. Anpu returns home and kills his wife.

Bata meets Khnum, a deity who shapes a wife for him, from clay. But soon a king likes the wife and snatches her to his palace.

Years later Anpu goes out to find his brother Bata and finds his heart on the tree. He puts it in cold water and Bata is resurrected. Then Bata turns himself into a bull and goes to the king’s palace to see his wife who tells the king to kill the bull (Bata), and she eats the bull’s liver. A drop of blood falls on the ground and grows into a tree (Bata’s spirit). Later the wife tells the king to cut the tree and make tables and chairs out of it. The king cut the tree and a splintered wood ends up in the wife’s mouth. It becomes an embryo, again, Bata’s reincarnation.  Eventually she gives birth to a son who ultimately became crown prince. When the Pharaoh dies, the crown prince (the reincarnated Bata) becomes king. He appoints his elder brother Anpu as crown prince. The story ends happily, with the brothers at peace with one another and in control of their country. They made up and as we say traditionally, “if you forget this story, may death forget you!”

Many versions of the story were inspired by the original story. For instance, Charles Dicken’s novel, A Tale of Two Cities, and The Lion King.

Today let’s focus on  the Lion King, another offshoot of the Egyptian legend which was made in a book by Alex Simmons, adopted by Disney and made into a cartoon movie. Children love the story about Mufasa and Scara, two brothers whose father, the king, favored Mufasa and Scara was jealous. And that created a gap between the two brothers.

Remember the above stories when you hear what I will tell you in this episode:

A few days ago I watched a video clip that included the story of Wedi-Major, a veteran of the Eritrean armed struggle. Watching that clip, I couldn’t help remembering Sophia Tesfamariam. That’s when I started to compare the situation of Wedi-Major and Asmara Rose… and the unfairness that is spread around us. The difference between the two symbols represents the divide among Eritreans. Wedi-Major did what was expected of a citizen and more, but now he is neglected. He represents the majority of Eritreans, particularly the oppressed section. Sophia represents the pretentious, opportunist elements who are empowering the regime and elongating the suffering of Eritreans. They are the “We are him, he is us” crowd.

Wedi-Major was wounded 31 times during the armed struggle era, meaning, he was killed and was resurrected 31 time. As a result, his face is deformed with scars, his eye is gone, and the children run scared away when they see him. And that is happening in the supposedly free Eritrea! It is the fate of Wedi-Major, the hero gave his life away 31 times to free Eritreans and establish peace in the country. Sadly, how he and his colleagues were paid for their services is evident on his face, his sad voice ,and his overall situation. Just observe his clothes—I am not sure if he gets enough food. I heard, like most of his colleagues, he is living in the barracks of the old Kagnew Station, and he’s not even provided with a comfortable house, 30 years after “Independence Day” in 1991.

If he has children, maybe they are selling chewing gums and cigarettes in the cold Eritrean streets under darkness. Maybe his children are forcefully taken to labor camps. Maybe they couldn’t stand it and were killed while attempting to escape through the borders. Maybe they died on the Sahara, or became victims of human traffickers and organ harvesters. Maybe they became food for the sharks of the Mediterranean Sea.

And you can listen to what Asmara Rose has to say about those who died in the Mediterranean Sea, the victims of Lampedusa. In fact, she is less of my concern, but I just wanted to illustrate the glaring difference between the doers and pretenders in Isaias Afwerki’s Eritrea. It is my aim to expose once more, the pretenders who have no friend but their bellies, their selfish goals, and their opportunistic  nature.

Since 1961, many fell down pursuing the struggle to make Eritrea a stable and prosperous country. On the opposite side, there were many who jumped from the lap of one oppressor to the next… all in pursuit of their narrow interests. While the “patriot of today, was presenting Haile Selassie, the killer of Eritreans, with a bouquet of flowers, the village of Ona and Besekdira were eradicated–over 800 people killed and their villages torched.  The cruel campaign spread all over Eritrea and reached the town of UmHajer, and villages like Weki-Dba and She’eb, and many places.

Our history has sad moments when Eritreans collaborated with the oppressors and committed grave crimes. Ironically, after independence, many of them were embraced by Isaias. The sad part is, brave people who paid with blood and flesh, people like Wedi-Major, Bitweded, Aster, Mranet, Senaiet, and many others, the list is too long, were brutally killed or jailed. Many are still living in dungeons while pretenders like Sophia own the country. Still worse, they have the temerity to call the likes of Sheriffo and Derou’e, the leaders of the struggle, traitors! This is the reality of Isaias’ Eritrea.

For instance, the architects and commanders of the Feqil operation, and the brave combatants who faced the fires, are silent, humble, while those who had no role, or no part in the inferno are pretending they made the Fenqil day real.  The brave Berakhi is in a dungeon while Yemane Gebremeskel is a minister on top of Forto. When the brave Mesfin Hagos  is living in exile, the guy whose role was nil, is controlling Eritrea’s wealth for the benefit of his boss. When the brave Bitweded is aging in a dungeon, the pretentious Yemane Gebreab is making national decisions. When Derou’e is thrown in a dungeon, whiskey inspired ‘ambassadors” like Bruno are gloatingly composing childish and embarrassing tweets. When the children of those who liberated Asmara sleep in its streets, the pretenders have made the city their tourist destination that they remember during summers only. In short, Eritrea is going through a very ironic, and contradictory reality.

Many people ask: why do dictators embrace nobodies while ignoring those who paid dearly? The answer to that is simple: dictators do not like anyone telling them their decision is wrong and they must revise it. They do not like anyone who criticizes them. Instead, they prefer greedy individuals who can be controlled by their selfish interests. They like people who are self-centered and do not care about the general affairs affecting the entire population.  They like those who have no noble history, but shame, because these are easy to blackmail and manipulate. And that is why heroines like Aster and Senait are in dungeons while the Asmara Roses are representing Eritrea.

But the good thing is, all of that will end. There will be a beautiful daybreak, and a sunrise. And it’s not going to be too long…soon enough. The monster tormenting Eritrea will be discarded—in the near future. Then we will have a chance to ask those whose slogan is “We are Him, he is us” That their slogan will be applied in the future trials, if you are an extension of him and he is an extension of you, then there is a good reason to try the “we and the him” together, as one entity.

Until then, we will keep reminding people what ails us because that is what we “the writer and speaker” lots do. Anyone who can do something else, should go ahead and do whatever needs to be done.

Finally, all those officers and officials and common citizens who are so cordoned they lack a private space, and have to meet inside cars, away from the ears and eyes of the regime, will soon walk proudly. We will all laugh and joke about our past and present predicament. We will remember our sad history with a sense of responsibility to avoid repeating it. Eritreans will live happily in their country. Mothers and fathers will embrace and kiss their children, friends will enjoy their time together. The longing will soon end. Justice and rule of law will prevail. Never doubt that, I never do. We and our tormentors are in for a pleasant surprise, but different surprises—one will be surprised by ululations and cheers, while the other will be surprised with the gravity of shame they carried for years. We will all be free. Just be prepared for the day when Eritreans reclaim their freedom.