Weed Out the PFDJ Beast 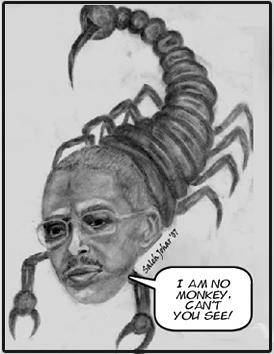 As I was about to publish this edition of Negarit, I was hit by yet another news of a tragedy: a few hours ago Mathew Price of BBC reported that today (Friday Oct. 11, 2013) another boat with more than 200 people capsized 60 miles off the coast of Lampedusa. Bodies have been spotted floating on the sea. I wouldn’t be surprised if the boat carried Eritreans victims.

I never thought my people would become the Boat People of the 21st century.

In 1987, I was on a visit to Hong Kong; by then, over a decade after the fall of Saigon in 1975, the Vietnamese had been leaving their country en mass, hanging on the sides of rickety boats and sailing around the South China Sea searching for a safe shore. Many traders and merchants considered bourgeoisie by the Vietnamese government were stripped of their properties and forced to the countryside to farm, a Vietnamese equivalent of the PFDJ’s indefinite agelglot and hate of the middle class and the educated. They all left their country just like our people are doing now.

Daily, about 200 people were landing in Hong Kong. News reports were full of shocking stories about the “Boat People of Vietnam” and it was a daily stable particularly when Hong Kong interned the refugees in camps under squalid conditions, behind barbed wires. To avoid integrating them in Hong Kong, the government had began to classify them as economic refugees, just like Israel is now doing to Eritreans. The miserable stories I witnessed then are no different than what is happening to Eritreans in North Africa, Sinai and the Mediterranean Sea.

Two days ago the PFDJ embassy in Rome expressed the Eritrean regime’s willingness to allow the remains of the Lampedusa victims to be flown to Eritrea—it seems the government had suddenly developed a kind heart for the “illegal Africans migrants.” Upon reading the statement, I couldn’t help imagining being at the airport in Asmara (Massawa not likely) and watching almost three-hundred coffins arrive! I imagined the wailing at bus stations, the funeral processions to places of worship and rituals, sight of coffins being carried to different villages and towns, and the wakes that follow. I imagined parents crying for the loss of their children, and children crying for the loss of their parents, relatives, friends and yes, lovers, grieving in each village, town, street and house. I imagined the gloom that would be many folds what our people are going through right now.

Coming face to face with a coffin that contains the remains of someone you love is profound, it is worse than hearing about their death. And here people would come face to face with shocking number of coffins, not one or two. Imagine the grief, the wailing and uncontrolled hysterical movement of the bereaved… and the grief of all Eritreans! It would be a situation that only the emotionally brave can handle.

For over a week now, we have all been on an emotional rollercoaster watching horrific video footages, and still-images, rows and rows of coffins, mostly brown with a few small white coffins, heart-wrenching scenes. Even the teddy bears that adorned them didn’t help.

And we are wailing some more….

I have always advocated for solving the root causes of the Eritrean predicament; wailing over manifestations is a human reaction, but it doesn’t help. It will not help Eritreans get rid of their tormentor. Never.

A wound festers and creates a bulging sack of puss; piercing the wound and letting out the puss is the first step in curing it. We need to bleed the Eritrean wound and let out the puss represented by Isaias and his minions.

Some years ago, awate.com kick-started a campaign with an editorial entitled “Starve the Beast” which aroused the umbrage of the supporters of the regime. But enough Eritreans had the same view and it really worked—though it took longer time than we expected. However, it was not only the efforts of opposition that managed to starve the beast, the PFDJ beast helped a lot with its own arrogant, corrupt Skunis policies that invited the wrath of the international community that paid it back with a sanctions regime. Following the incident of Lampedusa, we have entered a new phase; Lampedusa ushered a phase of weeding out the beast.

In general, the overwhelming majority of Eritreans have literally put a Dead-or-Alive call on the regime and its chief. News coming from Eritrea are very disturbing; the frustration might lead to an uncontrollable situation where the nation would be immersed in a bloodbath that the regime and its unhinged actions are creating. All patriotic Eritreans agree that the miseries have reached the brim long ago and the agonies are overflowing. In the militarized nation that the PFDJ created, anyone carries a gun; particularly the frustrated youth who might resort to desperate measures. Of course, millions of people suffering because of a clique whose members do not exceed 200 people is just unacceptable by any rational, human or divine—regardless of the calls for rationality and advocating a non-violent struggle, the situation is Eritrea is already violent, it has been so for over a decade. I don’t expect the people to be restrained indefinitely while the regime is wreaking havoc all over the place, causing thousands to lose their lives and millions to be denied the right to live freely. I believe things will take their natural course, any course that would weed out the beast should be more than welcome. Protecting oneself and fighting aggression, be it committed by a state or otherwise, is the right of victims who can respond in kind. That is the relevance of the second amendment of the USA, the right to keep and bear arms—of course that is meant to protect oneself, not to be hanged on the wall as an artifact.

Here is reminding reel that might refresh our memories…

When a boat capsized in the Mediterranean Sea and over a hundred people perished, we mourned, agonized and we become emotionally distraught. Mind you, that is not last week’s tragedy; it is the tragedy of March 2011.

Twelve days ago, a ship was wrecked in the same sea, we began to mourn the death of over a dozen of our own. We thought that would be the last tragedy for the year. But three-days later on Thursday, before the week was out, we were hit with yet another shipwreck. So far, 153 survived and the death toll stands at around 300. Reportedly, the ship carried 520 people, about 85 people are still unaccounted for, presumably dead by now. That would bring the death toll of Thursday’s tragedy to around 350 people. The average age of the survivors is 22 years though they in include children, babies and mothers who had delivered their babies while in transit, while awaiting boats to carry them to Italy, to the ill-fated waters of the island of Lampedusa. A woman had given birth while she was drowning; rescuers found the mother and the baby still connected by the umbilical cord!

But our agonies have not ended yet…

Three days after the calamity of Lampedusa, we heard yet of another incident in the Ethiopian refugee camps where, to-date, there are four wounded and one dead Eritrean refugees, courtesy of bullets fired by the Ethiopian forces. It seems a demonstration held by the refugees to protest their living conditions and appeals to end their plight somehow turned violent. Details are scanty because the camp is closed, but there are many Eritrean refugees in jail after the incident. And we might have more information as we go.

Such sad incidents have been following Eritreans for over half a century. In the mid-1960s tens of thousands crossed Eritrean borders escaping Haile Selassie’s scorched earth policy and ended up in many places, mainly in Sudan where they still live, forgotten in refugee camps—today, the camps are full of third-generation refugees… and still counting. That was exasperated by the Derg’s wanton violence that pushed tens of thousands more out of their homeland.

During the last ten years, the suffering of Eritreans turned a new page in the chain of sufferings when refugees began to trek towards the Mediterranean Sea in desperation. The despicable coercion, repression and organized smuggling was introduced to Eritreans—and the main players are from within the Eritrean regime who trade in human beings and ransom transaction are paid under the eyes of the regime whose supporters claim is “incorruptible”!

And we keep wailing and mourning piecemeal.

No one denies that wars have their own dynamics; since Eritreans were engaged in a long liberation war against Ethiopian rulers, they considered the miseries and sufferings a tax a nation pays in pursuit of independence. But why should Eritreans continue to pay that tax long after they uprooted foreign rulers out of their country and declared their independence two decades ago? Why would Eritreans suffer from similar fate under a so-called Eritrean government who is bent on outdoing the oppression of the Ethiopian rulers?

We have managed to starve the beast but the starved beast has turned into a worse monster feasting on the miseries of Eritreans.

This is the time to forget our grudges, petty bickering and shun the indifference of some of our own. This is the time to bond together to accomplish the goal of defeating the Eritrean tyranny. Our grief must be turned into rage, immediately. And that rage should be directed towards the cancer that is eating Eritrea from inside. Eritreans need to bleed the puss from the wound. Wailing is not going to end the misery of Eritrea. If it is not stopped, this regime will continue to create more tragedies and turn Eritreans into a sort of helpless widows who know nothing but wailing. Luckily, Eritreans seem to have come to grips with their responsibilities. The victims of Lampedusa, and many others, didn’t perish in vain, their death is the energy that would push Eritreans to eliminate the stains of tyranny from Eritrea. We have starved the beast; now it is time to Weed Out the PFDJ Beast; eradicate tyranny from Eritrea.

Saleh “Gadi” Johar is author of “Miriam was Here” a book that explains the root causes of the Eritrean predicament and why the youth are fleeing their country risking their lives, facing all sorts of death, drowning in the sea or dying of thirst in the deserts and in the way facing rape, torture and organ harvesting.