Three Envelopes for The Horn of Africa Leaders 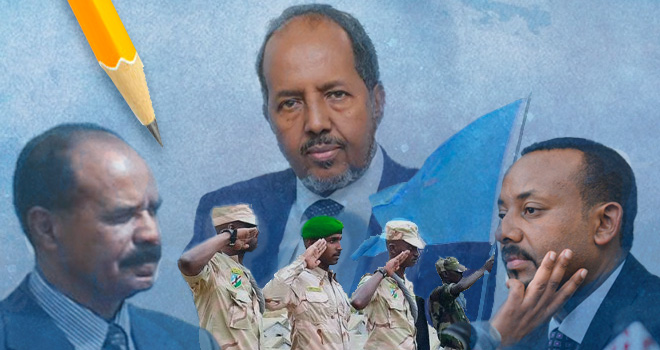 A newly appointed corporate manager asked his predecessor to give him the best advice he could. The outgoing manager gave him three envelopes and told him to open them in sequence whenever he faced serious difficulties. Soon, he opened the first one. It read: blame everything on the previous management and buy time. He did. A few months later he had to open the second envelope and it read: fire all the staff, blame in on them and declare you will start from a new slate. He did, but it didn’t work though it bought him some time. He had to open the last envelope. It read: time to resign or exit peacefully before you are forced out. He didn’t believe the message in the envelope, and he is still managing the corporation whose stock is losing its value.

That new manager could have been Abiy Ahmed.

In 2018, Abiy traveled to Asmara and was received with fanfare and excitement. The visit was widely publicized and promoted as a breakthrough to the stalemate of no-peace-no-war situation that followed the 1998-2000 border war between Eritrea and Ethiopia.

It was reported that Isaias Afwerki and Abiy Ahmed signed a so-called peace agreement between their respective countries. Confusingly, the same peace agreement was signed again and again–in Abu Dhabi, UAE, and later in Jeddah, Saudi Arabia. No one knows the details of the agreement. For Eritrea, there is no legislative body that debates and approves major national undertakings. For Ethiopia, it was (and still is) the season of dismantling the old system with no safeguards in place. Four years on, the country is not yet stabilized, and chaos created in the process is still destroying the country.

The 2018 peace fanfare had touched the emotions of the Nobel Prize Committee. In what looked like awarding a championship trophy to a team in the middle of an unfinished Premier League championship matches, the Oslo Committee hastily awarded Abiy Ahmed a Nobel Peace Prize for peace!

The much-excited Abiy Ahmed was so confident he wasted no time in embarrassing the Nobel Prize committee, which didn’t apologize for its grave mistake yet. Not many were surprised when Abiy took off his business suit, donned fatigued uniform, and embarked in another type of peace making displaying the golden coin he brought from Oslo. He ignited a civil war that is still raging; it has already consumed many lives and damaged the Ethiopian economy. Finally, it seems the world has came to terms with the fact that the agreement was a personal peace deal between Abiy and Isaias Afwerki. Somalia’s Mohammed Formaggio joined in when the dish was already cooked.

In the end of 2018, Isaias Afwerki visited Mogadishu and met Mohammed Formaggio; they agreed to send thousands of Somalis for military training in Eritrea. That was followed by several visits to Ethiopia and Eritrea where Somalia’s Mohammed Abdullahi Formaggio signed more agreements and became part of the Tripartite Alliance. More tripartite visits followed to several Ethiopian cities where the same vague agreements were signed one more time. Subsequently, an undisclosed number of Somali recruits were sent to Eritrea; reportedly numbering between 3 to 5 thousand men.

Last May, Formaggio was outvoted and replaced by Hassen Sheikh Ahmed. Though it seems that Somalia is slowly moving to normalcy, the dictatorship in Eritrea is still as suffocating as it has been for the last three-decades. In Ethiopia, however, the fires of civil war are still consuming the wet and the dry for the last three years–that was a sign to open the first envelope.

Isaias embarked on a rampage of forced recruitment of Eritrean youth, and jailing of members of the army, merchants, and public servants. Abiy did the same but in a much bigger scale, in addition to procuring large quantities of war toys while at the same time training thousands of Ethiopian youth to feed the death-conveyor- belt.

There is not much to say about the Eritrean economy that has always been in an ICU, but the Ethiopian economy is in shambles, even the upper middle class cannot afford basic subsistence life. Worse, security is lacking, like no time before.

Abiy had opened the first envelope earlier and he started cleaning up the ranks of the public servants, from guards to ministers. Then he embarked on a defamation and blaming game to the extent of humiliating senior officials on camera, by searching their house, putting them in handcuffs in front of their family members, and airing it on national media. In some instants his security forces humiliatingly hauled senior members of the previous regime into trucks, and helicopters, all on camera that was aired on national television. Worse, a rampage of assassinations followed, including generals and governors, artists, and engineers, but the forgetful citizens of the Horn barely remember such dramas for long.

Abiy had already opened the second envelope, dismantled the ruling EPRDF party and replaced it with his prosperity party. He had immediately launched his Medemer “ideology” in a book that the entire government apparatus promoted to the extent of systematically coercing employees to buy the book. Medemer became the talk of the nation after it occupied all the press space and media airtime.

In his election campaign, Hassen Sheikh Ahmed had promised to resolve the issue of the Somali trainees in Eritrea. Rumors and politicking have been going on for too long on the issue, particularly after “Ikram Tahlil Farah, a 24-year-old Somali whistle blower who worked for the cyber security unit in the Somali National Intelligence and Security Agency (NISA), … disclosed [that] Somali recruits were killed in Tigray”. She was found dead in Mogadishu. It worsened when Somali mothers “demonstrated and demanded that President Formaggio bring their children back and disclose they situations.”

In June Hassen Sheikh Ahmed visited the UAE and met with one of the sponsors of the so-called peace agreement between Isaias and Abiy Ahmed. For Hassen Sheikh Ahmed, it is still the first envelope, but if some observers are optimistically right, he might not need to open the second envelope, he might show wisdom. Isaias doesn’t open envelopes, the script for the next move is always ready in his mind, and he will abruptly execute it.

Meanwhile, the partisans of the Horn of Africa are spinning the news, debating the number of the Somali recruits, whether they were engaged in the war in Tigray, and if they did, how many were killed, and if anyone ever died in the war. But soon the Somali president will be back in Mogadishu where he must answer to the parliament, and maybe he can shed some light on the whole affair of the trainees. Including the claimed fees that Eritrea demanded for training the Somali force… if that is true, there is no doubt the UAE will pick the bill.

Abiy had tickled the emotions of many gullible Eritreans and Ethiopians until he removed his mask and showed Mengistu Hailemariam’s cloned face, exposing his real self to those who doubted. And  gradually, he had to open the third envelope. He did. But his pompous character doesn’t seem to take the message seriously. He asked his secretary to hand him the fourth envelope; the secretary said there is no fourth envelope, while murmuring in sotto-voce, ‘someone will force himself into this palace and read the third and final envelope for him, I hope I am not around when that happens.’

No Envelopes For The TPLF

The Tigray Government is in a precarious situation, and some hard-headed politicians who are always on the search for new enemies are not making it easier. The fringe politicians do not waste any opportunity to make aggressive remarks towards Eritrea though the senior officials have repeatedly declared their respect for Eritrean sovereignty, as a matter of principle. However, the few loose cannons among the cadre and leadership who are fond of threats and aggressive statements against Eritrea are still obsessed with coveting the Red Sea and its Eritrean ports.