Posted on April 6, 2015 by Chefena Hailemariam in Articles 25 Comments 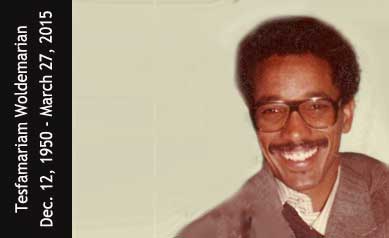 In memory of a young revolutionary

SAUA has nothing to do with SAWA, the military camp that gained notoriety associated with the horrific violation of human right in Eritrea. SAUA is the acronym of the Student Association University of Asmara and Tesfamariam Woldemariam was one the founding members and once its president. This week opposition websites broke the sad news of his passing away. It is a pity that one more revolutionary who left his home to join the revolutionary national struggle, didn’t receive the honor he deserves on his death. Far from being a faceless individual, Tesfamariam was an intellectual who figured prominently at a particular juncture of our history when the society required people of his caliber.

I may be not be the right person to eulogize Tesfamariam Woldemariam’s loss as I was neither his contemporary in a school nor his comrade in  mieda. I knew him from a distance and in a couple of occasions in my youth. Some six ago, I made some efforts to establish contacts with him so that he can help me with my modest attempt to reconstruct the history of SAUA which in not known much. I briefly spoke with him on the telephone. Unfortunately, my efforts to renew contacts was fruitless.

Nevertheless, there still exists an institutional link between the two of us via the only institution of higher learning that ever existed in Eritrea: the University of Asmara. There is also a text, which I am sharing below; that has me most and I think highly of him. I am using the text as a material to shade light on the person and the circumstance under which the text was produced.

In writing this article mainly for three purposes. Primarily, I would like to pay respect to the deceased who, I believe, signified the Eritrean youth revolutionary idealism of the 1970’s. Secondly, to give a ‘snapshot’ of the role SAUA played in the Eritrean national liberation struggle. Finally, against this backdrop, I want to challenge the discourse on the University of Asmara that has been circulating for a long time, with particular reference to the most recent publications, postings and interviews. By challenging these subjective representations, I feel it is my duty to share my knowledge of how the UoA has always been an Eritrean university irrespective of the kind of system under which it operated.

Without much ado, let me provide you with the following excerpt taken from the Voice of SAUA, the official organ of the Student Association University of Asmara. This transcript that appeared on the Voice of SAUA is at the heart of my narrative about the UoA. The interview was conducted by with the editor of the Voice of SAUA on the occasion of Tesfamariam Woldemariam’s  end of term as of president of SAUA.

The administration is not a homogenous unit composed as it is of different elements, secular and non-secular, expatriates and nationals, for instance. We will have to cope with this situation. Whenever, we see anyone of them trying to manipulate or dictate our Association’s activities we must remind him of her that we are not children. Whenever anyone of them obstructs or ignores our Association we must always help him or her regain his or her presence of mind. Whenever they misconceive the nature of our Association we must correct them. Whenever they want to advise or consult us on what course or courses to take we must always be willing to discuss, to communicate with them. You see, it is a question of degree and balance. The worst mistake that SAUA can commit in this case would be to mistake the administration of the University of Asmara for the system at large. (Emphasis original) (TW, 1973, pp 8-9).

Our reading on the surface structure of this text may not reveal the meaning of the content and its relevance for the ensuing period.  But it was the time when student political activism was at its height. The quote essentially revolves around a debate on how independent a student union must be: its powers in relation to university administration, in this case the university administration and the system at large, which is the government of Ethiopia.

Interestingly, that happened forty two years ago. Note the level of analytical maturity of a twenty three years old youth! He warns against the mistake they would commit unless they have a clear idea about the distinction between two interconnected structural entities, i.e. ‘institution’ (university and its administration) versus ‘the system’ (the broader structural level). I find this illuminating in that it helps us understand the role of individuals in a given structural positions at key moments in history. This issue ties up well with the difficulty that the founders of SAUA had to face when they were forming their student union.

In the same interview, one questions is about a lecture Tesfamariam delivered. It relates to the very mission of the university and the posed question was: “What kind of students should the educational system of the UoA “be geared” to   producing i.e. whether it should produce ‘individuals’ as opposed to ‘citizens’. Tesfamariam replied that it should produce “citizens” but add that regrettably it was producing neither, and adds, it is “pre-determined by the socio-economic standing of the nation”. Moreover, he was quite critical of the ‘idealism’ contained in the mission statement of the university. What we note here is an extraordinary critiquing of lack of alignment of the mission of a higher education institution and a nation’s manpower strategy. And that, by a twenty- three years old student. Isn’t that brilliant?

I have to acknowledge my most missed friend the late Behane Mesfin, who added a valuable input to my knowledge of the background behind the formation of SAUA. The idea of forming an independent student union at Asmara University was initiated by Tesfamariam and his group who came from Hailesellasie University to join the UoA along with the others who were in Asmara. The presented a request to the administration. Sure enough, the administration accepted their request, but a debate ensued to reach a deal on the association’s powers in order to get its constitution approved. With the rich experience of the Ethiopian student movement who was equipped with Marxist ideological orientation, and imbued with strong nationalist fervor, these ambitious revolutionaries became unyielding negotiators.

Berhane Mesfin recounted that the university president’s main concern rested on the Association’s ability to protect itself from external attacks, namely the Ethiopian security authorities. The University president, Dr Assefa Tecle, was appointed by the King Hailesellssie, and was one of the founders of the Medical School in Ethiopia. Berhane said that the president of the University, despite the hard negotiation he was engaged in, showed a rather fatherly disposition. He was caught between the degree of freedom that should be allowed to the association to function within the campus and between avoiding the risk that SAUA leaders would fall into the hands of the Ethiopian security agents. The university president reminded the SAUA members to take care of their own personal safety amid the rising political tension in Eritrea. In spite of the dangers that the Hailesellsie government’s security posed, SAUA was able to muster the organized student population. It is believed that the ELF had a wide following among SAUA activists. But little is known to this writer about the EPL/EPLF divide, although Berhane said there existed some partisan tendencies in the political discussions that SAUA members held.

Let me now draw you attention to one of the major reasons for this contribution in connection with the present sad event. One cannot overlook the role played by the SAUA and its founders in developing Eritrean nationalism, critical thinking and public intellectualism, and idealism. As an organization, SAUA made concrete achievements: organizing demonstrations, clandestine political activities, and helping junior students to grow educationally and politically. I can cite two significant evens I witnessed as a high school student: 1) the summer tutorial programs organized by Eritrean University students aimed at preparing them for the rigorous national university entrance exams. The program was a joint undertaking by the two universities, Tesfamariam was among the active members 2) SAUA was at the forefront in mobilizing senior high school students to reject the Dergue’s Literacy and development campaign, commonly known asEdeget Behbret Zemecha (1974-75). However, SAUA didn’t escape the danger when things got tougher–the Dergue’s brutality was at its peak and it was becoming clearer that SAUA was not going to function amid such hostilities. What followed was the dispersal of the student population and the closure of the university. It reopened in 1977.

The SAUA saga has not yer been recorded for the new generation of Eritreans to learn from. Reading the writings of the young revolutionaries like Abdualkader Osman, Dawit (Ghebremeskel? second name unsure) Tewolde Gebrasellssie, Tesfamariam Woldemamariam, one sees the farsightedness and timelessness of their views. Tesfamariam’s emphatic analysis in drawing a distinction between the university as an academic institution and he system in which it operated, was superb. This links well with the importance of the principle of autonomy of higher educational institutions. These youngesters were the best, selfless but critical, elements of the society. It is important to note that the UoA involved its students in such affairs even in those days. That points to the level of institutionalization it had reached. Admittedly, SAUA couldn’t leave a lasting imprint of its tradition in the institution it left behind. That was because, of the coming of the Dergue and the complete change in the socio-political order in Eritrea. In spite of that, the UoA always remained an Eritrean university. However, since 1991 a deliberate campaign was being waged by the EPLF inner-circle to shun anything the UoA achieved. These discursive representations aimed at associating the UoA with ‘Ethiopian’, hence unpatriotic and below standard. Such accounts lacked both fairness and veracity, yet, ghe campaign continued until the UoA’s was systematically dismembered in 2006. It was indeed appalling to listen to the brazen dishonesty presented to justify such a national blunder. In the end, we have to do justice to history because history will judge us in turn; let us give the people a little more time to come forth to disclose the whole truth.

Finally, I would like to reiterate that Tesfamariam and the SAUA belonged to the UoA and UoA had always been an Eritrean university.

May the soul of Tesfamariam Woldemariam rest in Peace