Archives: What Would Isaias Do? Peaceful Or Violent Struggle? 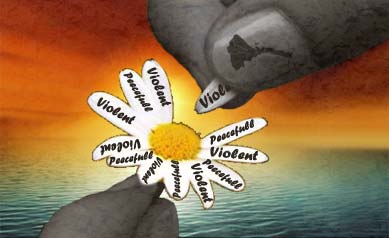 The following was published in June 14, 2007 under the title “What Would Isaias Do?” Since then, the issues that kept the Eritrean opposition busy has remained the: the same debates on topics that prevents Eritreans from focusing on the real task of removing the tyranny ruling Eritrea. Unfortunately, the “new opposition” that was supposed to inject fresh blood into the “old opposition,” and adopt critical thinking, finds itself bogged down in the same old trivial debates. Worse, it refuses to learn from the past. (April 8, 2015)

Isaias Afwerki gave a 145-minute long interview to the government media that he controls—an interview which barely mentioned the country he presides over. After listening to the interview which dealt entirely with Ethiopia, Sudan and Somalia, a wit commented: “Haile Menqorios should be generous and offer Isaias his UN job, because Isaias is obsessed with regional politics, Menqerios’ job, and not Eritrean realities.” From his 2 ½ hour rambling, we found the last five-minutes of the interview very significant and we have translated it, verbatim, for the benefit of our readers.

Here’s why we found it significant. The Eritrean opposition has torn itself apart over many things, one of them being the issue of the mode of struggle it should wage to resist the Isaias regime’s oppression. What should oppressed people do? Some toy with the idea of dialoging with the regime to achieve a peaceful transition. Still some entertain the idea that the regime can be reformed. Others call for using all means necessary. The question is this: what would Isaias do if he found himself out of power and if he felt that the government in power was oppressing his people? Here’s his charter for opposition. He said it in response to the reporter’s invitation to offer concluding remarks and a message to the people of Ethiopia. But it gives you a glimpse into his thinking (June 14, 2007):

Our stand with the Ethiopian people (as I mentioned earlier) Ethiopia, be it big, whether its population is 200 million, or 20 million, we are not concerned. There is nothing like that – we are [living] in the 21 st century. In order to live in peace, we, Somalia, Djibouti, Kenya, Uganda, the Sudan – what is the reason Ethiopia cannot live in peace? But there should be a way that leads to that [and Ethiopia is not following it].

What we have seen over the last 16 years is surprising. We have seen many things that were not in our minds, that we didn’t anticipate.   And we learned a lot. But as usual, the relations, that exist between us and the Ethiopian peoples – or the relations that should be there – there cannot be there a power that can hinder that, and make us live on a continuous chaos and continuous anxiety.

Weyane, as you mentioned earlier– the struggle that is being waged by the Ethiopian nations has reached its highest stages. And people, like…. cannot start to struggle without a reason. But if there is a power or a government that oppresses, suppresses it and excludes it, struggle is inevitable- since they do not have another choice. In order to improve the livelihood [of the people], and to live in stability and peace, it will be a must to remove the power that is hindering its peace and prosperity. Therefore, because of minor incidents, there appeared a hindrance, [someone] was crushed, or someone was hit in the head or a leader was jailed… and such and such happened to them… Our organizing [capability] is not satisfactory, we didn’t use time properly — many evaluations can be carried out. But the fiery feeling of the people stays in its place. The need for a people to seek its freedom and liberation is in its place. I, on [this] occasion, I want to convey— what does Eritrea want in your [Ethiopian]  regard, Eritrea wants this in your regard— even the Ethiopians will not listen to such speech. But the Ethiopian people can demand their own rights, that of its nations or nationalities. But at the end, the Ethiopian people should be able to create a situation where they can live [united] as one people, all the people, without distinction, without exclusion.

The opportunities aborted by the Weyane, since under any circumstance will not stay forever, all the Ethiopian people, be they Amhara, Oromo, Tigrai, Somali, Afar, and other different,  so-called ethnic groups, be it small or big, [due to] the consciousness it has reached now, it is not unclear to me that it is planning to put an end to it. Or [to find] a way to bring its own prosperity and stability. But I would like to confirm [here] that the Eritrean people and the Eritrean government are  by the side of the Ethiopian people. But what is spread, claims that: Eritreans, the government, or  its political forces said this or that… I … no one would be confused by that.  Maybe, [questions like] is the messages reaching all places or not? and, in reality, is there reach to our explanations? I , as I follow it with my capacity, [I can say] it has reached its highest stage. True, what has been undertaken during the last two years, incomparable, fascistic hold, it has created many delays and many hindrances…. But the people of Ethiopia, the path that they are following, which is not of their choice but is [one] imposed on them, I will like to affirm that the Eritrean people and the Eritrean government are on their side.