Around fifty thousand Eritreans are stranded in Yemen 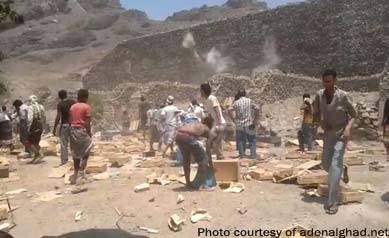 Over 200,000 African refugees still remain stranded in Yemen, they are predominantly Somalis, Eritreans and Ethiopians.

Chinese, Pakistani and Indian ships have evacuated their citizens, and so were the Westerners  evacuated immediately after the war broke. So far, the regional governments have not made an attempt to evacuate their citizens. Somalia is the only country that can claim that instability at home prevents it from evacuating its citizens.

Ethiopia could evacuate its citizens via Djibouti, but so far it hasn’t done so. While the second major supplier of refugees to Yemen after Somalia, Eritrea, is thirty nautical miles away. Its territorial waters and its Islands are half the distance from Yemen. None of the Eritrean government owned media outlets has covered the plight of the refugees.

Our sources estimate there are around fifty thousand Eritrean refugees stranded in Yemen. The refugees escaped Yemeni refugee detention centers and UNHCR camps after the war broke. A considerable number of the refugees are new arrivals while others have lived in Yemen for more than ten years. The majority of the refugees are originally from the coastal regions of Eritrea while others are new arrivals who escaped the forced military conscription in Eritrea.

Refugees reached Yemen hoping to sneak into Saudi Arabia or to continue their journey further north to reach Europe.

Reached by telephone in Sana’a, Hamoud, a refugee from Senafe said, “At this moment I am not worried about anything; I am just thinking about going back to my country to save my wife and children.” Hamoud and his family has stayed in a camp in the outskirts of Sana’a for the last two years. He has two children aged five and seven years.

A sizable number of fishing boats have transported dozens of Eritreans back to the coastal region of Eritrea. Those who made the return journey to Eritrea are people of the sea who traditionally do not recognize official entry points. They are skilled sailors who consider the sea their backyard.

Since the war reached Aden, human trafficking boats started to sneak out towards the African coast . Notwithstanding the Saudi imposed a blockade on Yemeni ports, many boats have left the coast carrying passengers who left on the perilous journey back to where they originally came from.

The traffickers are asking around US $2000 per person for a trip to Djibouti; those who can afford the price have embarked on the journey, but no one knows how many might have perished at sea. However, Ethiopians and Eritreans, who number over 100,000 combined, are still stranded in many parts of the war torn country.

On March 29, huge explosions shook Aden as the arms in a major arms depot in Jebel Hadeed went off for unknown reasons. People rushed to the area to collect weapons. Over sixty people were killed in the process, three of them “unidentified African refugees.”

Yemen is believed to be one the most heavily armed countries in the region. Every household keeps at least one weapon. Similarly, Yemeni tribes also have their own well armed militia forces that challenged government forces until the Houthi’s took control of many of their impenetrable mountainous regions.