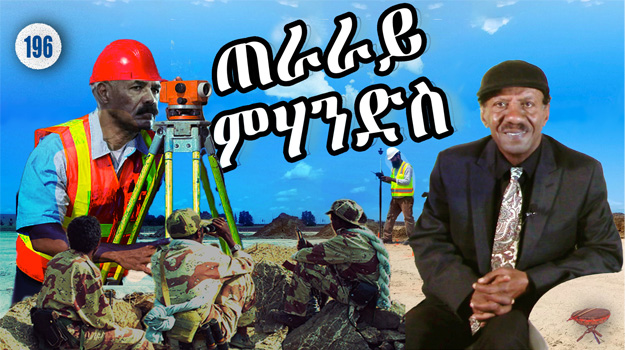 I hold that the problems of our region are mainly cultural, and it can only be ameliorated by fighting illiteracy and adopting proper social policies.

Sedentary communities’ land demarcation(m’Terar) is or region’s popular hobby, more nuanced within the PFDJ cult. In recent years the hobby went to the extreme, down to demarcating clan, religious, and linguistic boundaries. In some villages it’s difficult to find a burial spot unless the dead belongs there. The regional crazed with boundaries has ignited meaningless wars that could’ve been averted. But the culture lives in futility proud of the ancient saying, nresti yewagaala ansti, (even women fight for inheritance).

During the last two years we went through a devastating war whose fires are not yet fully quelled. However, the recent peace agreement among Ethiopians brough about a ray of hope; it seems to be holding despite the bumps on the road, bumps that the usual warmongers creating. I hope it’s comforting to know that the implementation of the agreement will be monitored by the AU, with a commitment by the USA to help, together with the other interested parties, that will provide the funds and logistical support. The is expected to provide air surveillance to monitor the situation as it holds a carrot on one hand and a stick on the other. That could be an considered an assurance by people of goodwill.

By the end of November, Eritrean forces, (sometimes mentioned as the foreign forces, other times as the rotten apples), will retreat to Eritrea. But there is a dilemma: the PFDJ never admitted its forces were in Ethiopia except through its mouthpieces. Though the government insists they are individuals, they represent t the government that says nothing, even if caught with its hands inside a cookie jar.

The agreeing warring parties appealed to all concerned to refrain from spreading hate speeches, incendiary statements, and provocations. However, the “individual” mouthpieces have yet to yield to the appeal.

A few days ago, the Ethiopian cabinet of ministers ordered all groups outside the Federal army jurisdiction to lay their arms down. There are indications enforcing the order will have entail dealing with many complications.

Dislocated federal officers, and other personnel are expected to be reintegrated into their pre-war position in federal army and the civil service bureaucracy. That includes the diplomatic corps. Certainly, the warring parties made a strategic choice. No other military force outside the federal army structure will be allowed to operate beyond what the constitution allows–Ethiopians cannot afford not to abide by the peace agreement.

However, Abiy Ahmed will have to deal-with the multi-pronged problems concerning different entities. So far, he was instrumental in preventing a threat of an imminent attack on certain forces, and it would have been devastating. But he had to because the so-called “foreign forces” are indistinguishable from the Ethiopian forces. Any attack will not spare the Ethiopian forces and equipment because the two forces are donning identical uniforms, their troops are fighting alongside each other. Ethiopian army and equipment and that of others are no easy to identify. Also, reportedly, the sanctions threat on the foreign country that has forces in Ethiopia was averted by Abiy’s intervention. But later it was proved it is not foolproof and may happen anytime.

Soon, there will be a meeting in Mekelle, and it evaluate the situation, address many sticking points of the agreement, and iron out pending technical issues. The inter-state territorial claims are expected to be back to their pre-war situation. Going forward, claims or counterclaims will be dealt in inter-party or parliamentary debates and deals– all political wrangling and legal dispute will be based on the constitution. In the center of the dispute are the territories in the South and West of Tigray, the most fertile and vital farming areas.

So far, some reports indicated the Eritrean forces have retreated from four Tigrayan districts. The border excuse that has robbed Eritreans of a normal life for decades will have to be resolved if there is to be peace. If not, the prospects for peace will remain gloomy.

True, the AU, USA and other powers are the guarantors of the agreement, but that is a temporary solace. No one will effectively establish peace is the responsibly unless the stakeholders insist on it and be willing to protect it. Guarantees are no good enough in a trigger-happy, chaotic region.

What did the Eritrean PFDJ government gain?

Many Eritrean diplomats, particularly in Africa, are so out of touch regarding the unfolding situation in the region. Not that they don’t follow the news, but their government doesn’t provide them with much information except defensive arguments. They repeat the party’s mediocre talking points prepared by party activists not fit for diplomatic arguments. And they must stick by the PFDJ’s narration that is transmitted to them through the usual “individual” in social media platforms. In short, they must amplify the PFDJ’s embarrassing narrations.

Certainly, the PFDJ doesn’t like the idea of Restorative Justice which entails accountability and retribution. Any side threatened by that is not expected to cooperate wholeheartedly. However, it’s prudent that all sides silently clean their own backyards before legal and illegal intruders bump through the door to accomplish their task.

Importantly, Eritreans have been denied normal live for too long. They’re grieving just like the rest of the region or worse. Tigrayans were denied electricity, internet connection, and the necessities of life like food and Medicine for a brief period, but Eritreans were marginally in a better situation. They still suffer from oppression, extrajudicial imprisonment, harassment, and lack of basic rights–Internet connection is a luxury. Soon, many Ethiopians, including the hard hit Tigrayans will be reconnected, and they will be more informed about situation in their surroundings.

In a post-war environment, people are bound to be assertive and will demand to have their lot is improved. Propaganda and groupthink will not survive a postwar period. If not attended to honestly and properly, there is no telling what the oppressed people’s reaction might be. Those who don’t play it right, will suffer greatly, including the Eritrean people, the PFDJ government, and the opposition.

For too long, the Weyane card, the scarecrow, helped the PFDJ in controlling Eritreans through emotional manipulation and blackmail. It has convinced many that sovereignty is a military issue; winning a battle equals upholding sovereignty. The PFDJ doesn’t talk about the sovereignty of citizens. When. the guns stop, all the political ploys lose their effectiveness, the tricks have outlived their shelf life. The undermarceted border excuse is not an argument anymore—provided the Ethiopian government stays true to its statements and demarcate the border. But I hope the issue will be finalized by technical people, not politicians.

All in all, the border issue is not an item that will force Eritreans into silence anymore, unless they are gullible enough to buy the same PFDJ’s failed policy that it peddled for the last 22 years. Also, provided there are no fine line deals concerning Eritrea in the Pretoria or Nairobi agreements. In that case, the region will return full circle to where it was sixty years ago. Eritreans are hoping not to hear the stale catchall Weyane phrase or joker card anymore.

Inside Eritrea, the cruel and embarrassing situation is still prevalent. The PFDJ has failed to resolve basic governance issues or restrain its security apparatus that turned the country into a police state. Despotism has turned Eritrea into a prison that quarantines all those who challenge its policies and excesses in every aspect of the Eritrean life. Citizens are in dire need of openness and freedom.

Some cosmetic changes are expected in Eritrea. The PFDJ is likely to claim it has achieved its goal of securing Eritrea’s border and sovereignty by getting involved in the Ethiopian civil war. It will claim it has been for peace all along when it was salivating to destroy a rival at the expense of Eritrean lives! Eritreans are used to subjective, unquantifiable claims for too long.

True, Isaias’ government was invited by Abiy to be part of the bloody war; it was very clear since 2018. But now that the Ethiopian are searching for a lasting peace, the Eritrean forces must pull out immediately and doesn’t overstay its invitation!

Finally, Eritrea is engulfed by a gloomy cloud. There is a scary looming risk, like that which revisits the country periodically. The current situation can be considered what Naomi Klein explained in her book, “Shock Doctrine”.

If the PFDJ realizes that, then it must take advantage of the environment of change. The gist of my argument is: it can serve the country better by stepping aside peacefully and gracefully and help Eritreans take charge of their affairs.