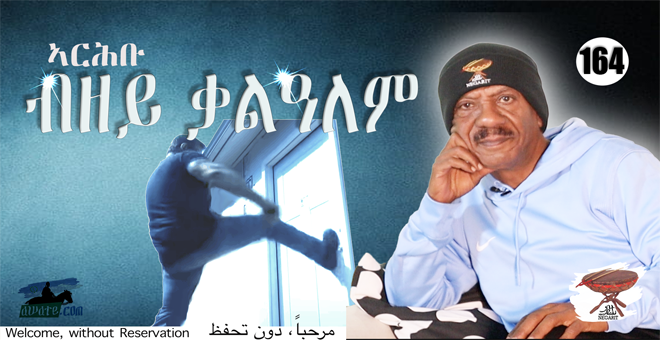 Sometimes, either out of respect, or traditional humbleness you sit on the edge of chairs when visiting other peoples’ houses. The host encourages you to “sit properly”, take off your shoes and relax. Then the host suggests to present food, but even if you are dying of hunger, you pretend you are fine, “I just ate”.

After so many years, many Eritreans in scattered all over the world are still not feeling at home. They are sitting on the edge just like a guest, rarely feeling at home! However, when you are an immigrant, no many ask you to sit properly.

In Eritrea there is a term “Qal Alem”, meaning commoners-speak, as opposed to clergy-speak. Priests ask the hosts to present the food and drinks to bless. They have no qualms in asking what they want, unlike the commoners who are embarrassed and bashful to ask for food boldly.

So, most immigrants sit on the edge of the chairs provided by the host countries, some never feeling part of the nation whose passports they carry and benefit from its social services—schools, healthcare, housing, etc. But those who break that cultural timidity and taboo are successful in their adopted countries.

The Oldtimers refer to the people of the host countries in the third- person, always keeping that psychological barrier alive. That is why I get excited when I see first generation immigrants working hard and breaking into the system.  Like what my friend Semere is doing, running for office in Carrolton, Texas, and before him Arhe Hamednaca who was a Swedish parliamentarian, Rezene and others involved in the politics of Sweden, Ibrahim who recently became a parliamentarian in New Zealand, Andon who was running for congress New York, and congressman Negusse from Colorado–and a few others in politics and public services in a few countries. There are also many others who are shinning in their respective professions like Dina Shekehdin Yassin, in fashion and Venessa Tsehaye, in advocacy. But I have not seen many lawyers, professors, doctors, and engineers who are head and shoulders above their peers, maybe there are some I do not know about but still, it would be nice to see successful people.

However, in Africa and the Middle East, we might as well forget it. People there are struggling to have a residence permit after living for decades in some countries where their children are denied schooling for many reasons. Some Eritreans ask you to mention the names of your perceived ancestors, seven generations back to accept you as one—provided you are from the right sect or region. Of course, that attitude is laced with a backward mentality and fascistic manner.

Semere Habtemariam left his ancestral village of Weki Deba, Eritrea, as a child and lived as a refugee in Sudan for a while before he settled in the USA at a young age. Now he is running for the Carlton city council in Texas. Here I wish all those who can vote in his locality to help his campaign as Americans first, and then as immigrants who want to see their own penetrate the seemingly hard circles. That will raise the standard for the second-generation immigrants who truly call the USA home. In addition to their ancestral home, where their parents came from, where they live is their country.

Eritrean politics should be limited to Eritrean circumstances, and not forced into American affairs needlessly–do not mix the politics of the two countries, but build a foundation on which you can establish strong connections and benefit both your ancestral and adopted home.

Immigrants should realize they live in different countries not in Eritrea for which we wish all the best and we keep doing what we can to help. But do not insist on doing everything alone.

For instance, we recently celebrated Woman’s Day. Why do Eritrean women meet alone and organize alone when they can tap into the resources of the entire population around them? We don’t many immigrants have friends outside their small communities. If you visit migrant restaurants, mostly you find tables where only Eritreans sit. And if there are non-Eritreans, they also usually sit alone.  It is the same with our activists and politicians, secluded, exclusive, and no effort to expand the support from the locality where we live.

Finally, I wish Semere good luck, he is culturally literate, and I trust he will do well. At the end, it is not about winning or losing an election, it is carrying out an enlightened campaign focused on public service. And for that I thank him in advance, and I urge all those who can help in the campaign, influence their circles, or those they know in the electoral district, to help as much as they can. Good luck buddy.