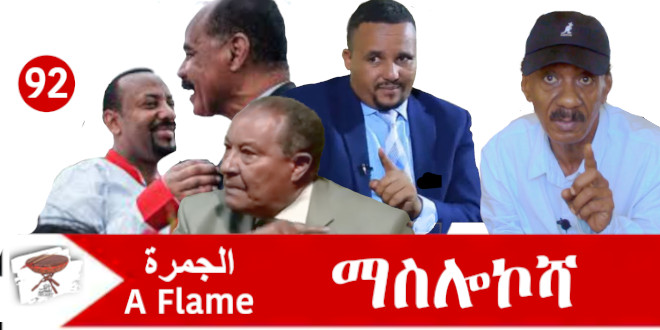 Once someone took a snide at me and called me “ambetta belitta;” it means locust eater in Amharic. He jokingly explained it’s how some Ethiopians derogatorily describe Eritreans. A large portion of Ethiopian are known for their “qnie, what’s called Wax and Gold—what they say is not actually what one hears but has another deeper meaning. I became defensive\ and replied, “we do not eat two-legged anbeTTa–I hope say it metaphorically, but true in the recent past we did eat a lot of invading two legged locusts.”

He despairingly replied, “really! Then why are you unable to eat the two-legged locust lording over your country?”

That was painful and I was not going to give in that easy. I said, “remember you eat raw meat and you pierced everyone’s ear drums repeating your claimed 3000 years history, yet have nothing to show for it, like some civilized traits…for instance quitting your addiction to bloodshed.” Everyone laughed out loudly—they love qnie. But by now, my interlocutor was annoyed.

I advised him, if you like to joke and make snide jokes, you should have a stamina to take it to its natural conclusion and not get worked up. The people around us nodded in approval and we parted smiling.

So, as I said to my friend, we don’t brag about our short history, we are humble about it. I hope you will listen to me in a relaxed mood; this is my attempt to help loosen you up–tnnish fegeg yasfellgal.

Once upon a time a child was playing with his new football. A bigger boy came and took the ball from him. It took the child thirty years of struggle to reclaim his football. Then he happily went to his home, but his elder brother snatched it from him. He his little brother that their father had bought it for him but since the little brother protested and cried, the father told the big brother to give the ball to the little one to silence him. Therefore, it was his ball and he was not going to give it away. The younger brother has been in a second struggle for thirty years and counting. But the big brother is just keeping the ball. He doesn’t play with it or let others do. He is screaming war cries, zeraf-zeraf, and facing his little brother but both are now at the height of their confrontation. And here is the two-legged locust watching his little brother and his friends grouping to reclaim the football.

All that is a tragedy present day Eritreans inherited, nothing of their own making.

Our people have a saying: ‘nezia ente resiEkum mot tres’Ekum.’ It means, if you forget this story may death forget you! It is a way to reminding the listeners not to forget the story, and the mention of death is just to incentivize the listeners.

Bravado. Bravado. And more bravado! Erre mn n’ew negeru! Generation after generation infatuated with violence and bloodshed. Are Ethiopian poised to destroy what they build over the last three-decades? Why is all that? Stay away, don’t stop me!

I have said this before and I will repeat it. If Ethiopia is overwhelmed by disease and famine, if it is engulfed with poverty, the people should not complain to God. He has given them anything a country can wish for. What is in short supply in Ethiopia? If you wanted a mountain, any Ethiopian can have one. If you needed water, there is enough to go around… with a huge surplus. Even if you want camels—a father, a mother and four children can have six-camels parked in their yard. The Ethiopian camel population is amongst the largest in the world. The number of sheep, goats, and cattle is beyond imagination. There is ample eucalyptus and other trees that can provide a home for every Ethiopian. Be kind to yourselves, learn to be thankful.

Maybe some of you will curse me, “why is he interfering in Ethiopian matters?” It concerns me. Not because of Ethiopia only but mainly because of my concern about the safety of Eritrea. The fires you ignite in Ethiopia will certainly burn Eritrea. But once your fire is extinguished, you always leave a burning coal in Eritrea for use as a spark whenever you feel like starting another fire. That is when you come to Eritrea to claim the burning charcoal. That has been our history with Ethiopian fires.

Now we are in the year 2020 “since the day of mercy”. May God have mercy on all of us. The pace of development in the new world is different from the past. And no one is waiting for anyone until they catch up. If a country remains behind by one year, after ten years it will not be lagging behind only for a decade, but a century. And today’s world will certainly not wait for someone who knowingly breaks his legs. There is no waiting courtesy for anyone as in a group hiking trip. The world doesn’t like the lazy and the reckless. Now let me address a few things:

Finally, as long as they have an influence in the society, there will never be any peace. Please listen to me, take them to Amanuel Hospital, pronto.

God bless you all

NB: This article started as a script for my weekly youtube channel that I deliver in Tigrinya. but ‘Negarit 92’ ended up being in Amharic with the hope of expanding the reach.