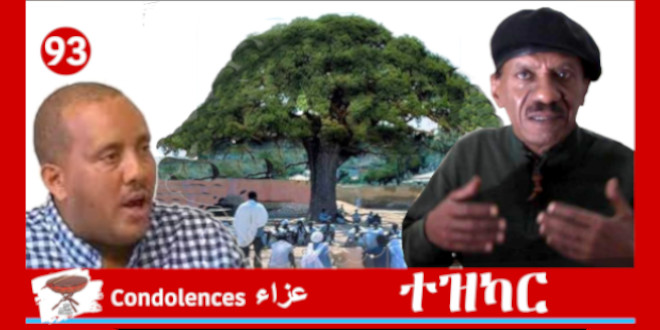 Some of you must have seen or attended a community or village councils: the accusers and the defendants will have their say, and then they must remain silent unless allowed to speak. violating that council tradition of silence results in a fine. Therefore, when one of them would have the urge to say something, they can’t. Unable to resist the urge, they make noises mmmm, mmmm. This is Negarit 93,

Tezkar, Khatimna, that is how you close a mourning period.

There was a large old tree by the stadium in Keren, but in the nineties,  they cut it down. They killed it. If I was to try the person who ordered its cutting, I would not be so lenient on him. I say “him” because I am sure it couldn’t have been a woman!

That tree saw so many councils, many people met under its shades. They discussed community issues, resolved feuds and quarrels, reconciled blood enmity and decided on reparations and compensations. They made no noise, because meeting there required a strict discipline. The elders listened quietly, never interrupting anyone unless they finished what they want to say. The accusers and the accused had their time, they made their case while the elders listened. When they finished, the elders whispered among themselves. Meanwhile, as children we watched the council from a distance. It was like a ritual.

The council resolved many conflicts, over blood or social feuds, by inter-marriage in which the families of the killer and the deceased would come with a bride and a bridegroom. As a result of the wedding, the blood enmity is “cooled.” Reconciled, they would hold a party to bless the agreement. Then, each party names guarantors to the agreements and they all walk away. A word given in public is so dear to the tribes; their pride and dignity depends on how honorably they adhere to their public declaration.

As a child I went there to listen to the deliberations, trying to guess what I did not hear. It was a valuable lesson my generation grew up learning.

Children fight over toys and small things and often they give each other a bloody nose. Oftentimes, an elder interferes and asks the children to reconcile. But pride gets in the way and they keep shrugging. However, if they reconcile, they must hug each other and it’s over. And soon the children forget the quarrel and go to play together. But if they refuse to reconcile, a threat or a slap or two forces them to hug each other. Yet, whether willingly or forced to do so, unlike adults, children forget quickly.

When someone dies sorrow engulfs family and friends, and they cry, wail and weep. Some do not eat or sleep for a long time, even take a shower or change clothes. They stay in mourning for a while. But then they must have a closure. On the day of closure, they slaughter animals and feed the poor and the people who come to pay their respects. Intense prayer for the deceased follows and then everybody leaves. A closure.

In most highland Christian traditions, the dead is not interned quickly to give time to relatives and friends to attend the funeral. If someone dies in a place far from his or her ancestral home, the body could stay in a morgue or a temporary grave but finally it must come home to be buried properly. But until that happens, there is no closure, the relatives go through tough mourning period until the final funeral—kalaay qebri.

In the Muslim culture, burying the dead is like a race against time. If a person dies in the afternoon, and if there is enough daylight time left, the body is buried at once. But if it is dark, it stays until the next morning. And then the usual mourning starts which might go for a week or so.

Eritrea has gone through many cycles of bloodshed, especially in the last two centuries. Meanwhile, grievances have been piling up and disrupting the unity of the people. That is also true with Ethiopian-Eritrean conflicts. These experiences have left us with so much bitterness, so much hate, and so much suspicion. Yet, the region was not blessed with enough wisdom to call for a proper closure–a closure where historical, social, and political enmities and suspicions are resolved and buried once and for all. Only then will people focus on the future with a positive attitude.

But if there is no closure, the grievances are skin deep. They reappear with the slightest provocation, with the slightest weakness of the economy, or social problems. It flares up and summons the jinni. And every time it does, new layers of grievances are added. Naturally, manufacturing accusations, recalling mythology, and presenting polished old hate messages as issues of today. Usually, the weak and the opportunists will want to avenge the real or perceived grievances that befell their perceived ancestors centuries ago. Imagine millions of people with such stories kept alive due to frustration, due to the need to blame others in order to feel liberated! Yet, everyone has the ability to fabricate grievances.

I have called for reconciliation for a long time, but unfortunately, even those who should know still think reconciliation is like two children fighting over toys and that like children, adults can be convinced or coerced to kiss up and forget the issues. Some underestimate serious social issues. They think one leader hugging another is as good as the entire societies reconciling. That is why we see the naïve consider the hugging of Abiy and Isaias as a reconciliation between Ethiopia and Eritrea. But sadly, that naivety is not the trait of our people only, even the most advanced countries fall for it, including the Nobel prize institution that is convinced Eritrea and Ethiopia have reconciled. As pitiful as it is, they expect people awash with violence and chaos will listen and believe them. If that is the case, they can tell Eritreans and Ethiopians “you are enjoying all your rights, there is no oppression, your countries are flooded with justice” and it will be so! How I wish the illusion was real and that easy, like rubbing Aladdin’s lamp.

Closure. We are badly in need of closure.

When I called for reconciliation all these years, what I have in mind was always a closure. And achieving that kind of closure requires a process like the one that South Africa implemented: “Truth and Reconciliation.” A fresh look at the festering wounds is a must; the wound must be acknowledged and treated properly and not left as they have been for many decades. A proper closure is a must, not a handshake among leaders who do not have neither the mandate nor the legitimacy. How could one imagine that when the stakeholders are not part of it! Entities like the Nobel Institution should know that unelected leaders do not monopolize the feeling of the people, and there is no known human experience of proxy reconciliation where a representative is the oppressor. How is that different from wars waged on the name of the oppressed? Are oppressed people responsible for the proxy decisions, when they bleed in wars not of their making?

All conscious people with a little sense of morality should call for a closure. But such an endeavor must be led by noble patriots, respected veterans who went through the thick and thin; children, parents, spouses and siblings of martyrs who live with the memories of their loved ones;  religious leaders who are not part-time politicians; and conscious Eritreans and people of our region who want to achieve a long-lasting peace in our unfortunate region.

Finally, my dear compatriots, don’t be hard on yourself, all the disunity and disarray you are going through is not unique to you. It inflicts any country that lacks leadership, that lacks normal life, that’s threatened, pushed out, marginalized, persecuted and endlessly wronged. Don’t complain too much about the lack of unity. Stop sloganeering about unity, instead, work hard to achieve it. Challenge the forces that have become a hindrance to peace in our region. Challenge those who preach addition but practice subtraction. Challenge those who consider the people lab-mice on whom they test their opportunistic theories. You are the wronged, and rectify it with your own hands, minds and deeds. Practice what you preach. Shun all those who preach instability and chaos. Shun the dishonest who lack character and integrity. Then you will be masters of your destiny and you can chart a peaceful future for yourselves insulated from bloodshed,  poverty, wars and fear. The rooster will crow. It must. It will crow. What else can it do?