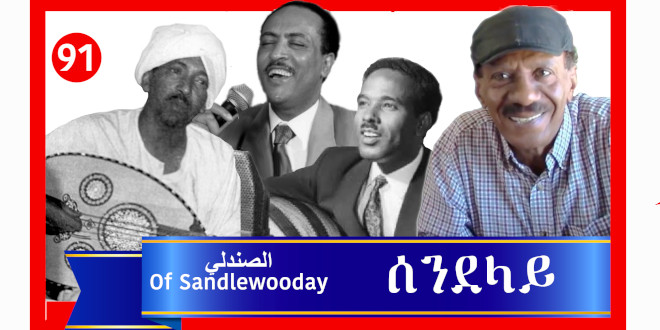 [This topic was published as a book review on.  Now it is satirized and adopted to fit the audio audience on my YouTube channel Negarit]

Today’s Negarit 91 (ሰንደላይ – of Sandalwood – الصندلي)  will raise two topics, actually three: 1) to prove once and for all that Keren is culturally superior to Asmara and Addis Ababa, 2) to re-introduce you to the book, ‘Gift of Incense’, and 3) To silence all those who are fond of mocking Keren.

‘Gift of Incense’ was written by Judith Ashekleh, Abubaker’s wife for 32 years. To me reading it was a pleasure because I can personally relate to the main subject and stories in the book. My father, a very close friend of Saleh Ashekeh, Abubeker’s elder brother, an MP during the reign of Haile Selassie, never answered my question about Abubeker when I was young. I think he was discouraging me from thinking of emulating him and end up a singer – who among us didn’t want to have a guitar and be a pop star when we were young? But years later, he confided to me that his peers, including Abubeker’s brother Saleh, were jealous of Abubeker because he was always well dressed, elegant, clean haircut and perfumed something that embarrassed the less elegant.

Those of us who come from the “bowl of Keren’s mountains” (Senkil, Lalemba, Etaabir, and Zbaan) cannot help talking about Keren for any reason let alone when we get an opportunity to do so. This book offers a marvelous opportunity… to boast. That bowl surrounded by mountains gave birth to many people who contributed in many aspects to the lives of both Eritreans and Ethiopians. A glimpse of this captivating book rightly shows Keren to be a place out from a fairy tale that it is. It offers movie-like stories about the colorful town of Keren during and after the defeat of the Italian colonizers in WWII. Those were Abubeker’s childhood years.

Gift of Incense is written by Judith Ashekeh as told by her husband of thirty-two years, the late Abubeker Ashekeh. It is a story of “Sendelay”, Yimma Zeinab’s pet name for her son Abubeker. Who is Abubeker Ashekeh?

Raised in the Ad Habab neighborhood of Keren, Abubeker thought “the world ended at the top of [the] mountains” that surrounded Keren, “never mind that [his] relatives came on camel caravans (page 290, guzo..we have to teach you Amharic!) from beyond those mountains”. Abubeker “wed Mohammed, wed Hamid, wed Idris, wed Ashekeh, wed Mender, wed Oqba Micael, wed Araadom, wed Hinit, wed Be’ument, wed At’Keme [Asgede’s brother]” was born in Keren around 19342; lived in Asmara in his late teens; worked briefly as an oil pipe welder in Saudi Arabia in the early fifties; returned to Massawa and stayed there briefly; moved to Asmara for yet another brief stay; lived in Addis Ababa, “the oversized village” from 1961 to 1978; migrated to the USA in 1979; and died in 2000 in Lakewood, Ohio – “Sendelay” the exceptionally talented pioneer artist, died half a globe away from Ad Habab, Keren, his birthplace.

In the bowl-surrounded-by-mountains town, Abubeker must have been sneaking to wedding parties and numerous harvest season goylas, dances and feasts like Mariam Daari and Ad Sidi before falling in love with the Oud. Only Abubeker and Julio Mekhelef [Metcalfe]3 who grew up a few houses away across the yard of Bombet Ab Rayet, were the two people known to have been obsessed with the Oud in Keren. They must have been influenced by the young Sudanese soldiers who arrived with the British forces and policed Keren after 1941. At weddings and private parties, Abubeker watched very closely as the Oud players plucked the strings hoping to discover the secret of imitating the sounds. Thanks to his father’s wind-up gramophone, he was already introduced to Western music. Eventually, Abubeker owned his first second-hand Oud which he bought it from one of the soldiers leaving Keren. This must have been a fierce confrontation between him and his relatives and older brothers who “directed their disapproval at [Abubeker’s] willful determination to be a musician”.

Born to a traditional and conservative Muslim family, it is understandable how Abubeker must have been frustrated for not being able to pursue his musical hobby freely. But those who know him say that Abubeker was a rebel from his childhood. That frustration might have been the cause for his aggressive adulthood when he was considered “a one-man army” committing adolescent mischief that terrorized his teachers and challenged other adults older than himself who showed off in town. Keren must have been too small and suffocating for him. He wanted to go beyond the mountains and discover the world. And if you are born in Keren, the edges of the world started in Asmara. Keren was its center.

Abubeker left the center of the world to the edge of the world: Asmera, a city that was beginning to develop a few music and entertainment talents after the end of the Italian occupation. One sunny day, Abubeker must have arrived in Asmara equipped with an old Oud and his astounding skills of singing and playing Oud, mandolin, guitar and Violin. Important: a determination to make it big. In Asmera, he became an instant sensation. His most remembered song is a eulogy “Aba Hbesh Moytu Frqi leyti”. You know how it goes:

His first big opportunity came when an Italian company hired him to play Oud background music for a movie, called “Eva Nera” which was being shot in Asmara. The producers liked Abubeker and offered “to get [him] a passport and into a music school in Italy”. Abubeker traveled to Massawa to board a ship bound for Italy. But his elder brother, Osman, having discovered the plan, alerted a close friend the chief of the Eritrean police, the late Colonel (later general) Zeremariam Azazzi who had Abubeker “arrested overnight until [the] ship left” port.

I can imagine Abubeker’s frustration. His opportunity for going to a music school demolished, Abubeker, started to play in night clubs and shows with similar aspirants of his age, names like the late Amleset Abbay, the vocalist who was “already famous”. She is mostly remembered for her immortal song: Sadulaye. Naabaye; Yehhshenni do msaKha mqnnaye!

In search of a better opportunity , Abubeker left from “Imberemi beach” near Massawa to cross the Red Sea on a sambouk to Saudi Arabia.

After eighteen months, Abubeker returned to Massawa from where he returned to Asmera and played at “the Odeon Theater and Asmera Theater [where they] had live musical production once a month … playing violin and Oud and composing new melodies”.

Beginning 1958, Eritrea was chocking because of the erosion of the federation by Haile Selassie, rampant unemployment and political instability. The music business was being heavily censored and on May 15,1960 [Abubeker] took the bus to Addis Ababa, the big village.

‘A Gift of Incense’ will certainly massage many Eritrean egos. The book has surprises and introduces the reader to yet another Eritrean, an individual who was instrumental to the success of the Kbr Zebegna Orchestra (KZO), Haile Sellasies’ Body Guard Orchestra: Lieutenant Girmai Hadgou. He was an officer who was shipped to Korea a day after his graduation from the officers school and served with the 1st. Battalion under General Aman Andom4. Lieutenant Girmai Hadgu, played the accordion, mandolin, piano and electric organ. He was a composer and musician for the Imperial music department.

Liuetnant Girmay heard Abubeker play in a nightclub and later helped him get a job with KZO “as a civilian”. He auditioned Abubeker in front of the “two generals, Girmamey, and his brother, Mengistou Neway5, as well as other officers.”

The organizational and promotional skills of Lieutenant Girmai were vital to the success of the orchestra- of course, the KZO was a propaganda tool for the king and no doubt it was generously funded and had its segments on the radio station. But we need to realize that it is excellent singers like Telahun Gessese and Mahmoud Ahmed supported by the skills of Abubeker and Lieutenant Girmai who made the KZO what it was. And it was Girmai and Abubeker who spotted the talents of the shoeshine boy, now famous vocalist, Mahmoud Ahmed and brought him to the limelight to be hired by the KZO.

During his time as a composer of the KZO, Abubeker composed hundreds of tunes that made many KZO singers very famous. The KZO popularized those songs, but Abubeker’s name, after staying on top of the Ethiopian music world during the sixties, vanished into the basements of Addis Ababa’s nightclub business. The great musical genius slowed his production of music yet he left his mark on the Ethiopian cultural scene:

There are a few songs that are not original but “Ethiopianized” by Abubeker. However, not many know the songs are adoptaition of Sudanese melodies introduced by Abubeker Ashekeh. Here are two examples:

And many other songs… at one time the cultural ties in our region was healthy but now it is poisoned. That’s why a few people know that one of the major character of this efforts is “Sendelay”, Abubeker Ashekeh, the talented Kerenite musician who Ethiopianized many famous Sudanese hits. Ethiopians owe Keren a lot!

The reader would not help but feel disappointed that Abubeker didn’t produce much music after the end of the sixties. I felt that when I came across the painter and architect Abdella Kekia’s6 name in the book, another famous Eritrean who contributed greatly to the Ethiopian urban lifestyle.

Links to some of the Sudanese original songs and an adopted Ethiopian song;