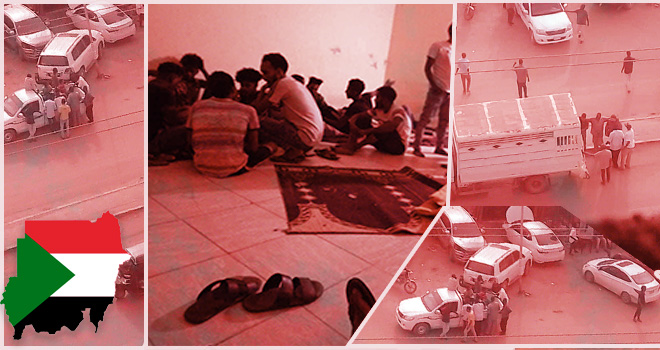 Until the 19th century, the Horn of Africa was one vast region where communities knew their farming, grazing, and dwelling lands. But towards the end of the century nation states with boundaries appeared. Before that, Kings, warlords, and colonizers knew where to collect taxes from, but the people cared less on who the lord was, power decided who taxes what in a region or tribe.

Sudan and Eritrea shared tribes that straddle the modern boundaries though it meant nothing to the people as far their animals grazed freely, and if they had unhindered access to their farms, and were safe and secure in their homes.

In the 20th century, boundaries evolved and strictly limited the free movement of communities. Sudan and a few other countries remained a caring neighboring countries to where Eritreans escaped whenever they faced the continuous aggressions by a warlord or an ambitious king.

The first wave of Eritreans trekked to the Sudan around 1967 when emperor Haile Selassie’s regime launched its scorched earth policy in Eritrea. By then, unlike the primitive aggressors of the past, the marauding aggressors were equipped with vehicles, modern armies, and fire spewing air force. Eritrean villagers escaped and found refuge in Sudan.

The Sudanese people had always been generous hosts to the beleaguered Eritreans in spite of the intermittent political and security challenges in Sudan that exacerbated the security situation.

Today, fifth-generation Eritrean refugees in Sudan are suffering of untold miseries and injustices. To make it worse, the PFDJ regime of Eritrea maintains a formidable intelligence and security presence and is active in all parts of Sudan. The impact of that on the new refugees in Sudan, where they reached escaping from the oppression in Eritrea, is great.

Since 2000, refugees have become victims of instability in Sudan where joint groups of Eritrean and Sudanese officers exploit and terrorize the refugees. Human traffickers continue to milk refugees of their meagre resources and force them to reach out to the relatives in West to send them more funds. The conveyor belt that brings Eritrean refugees destined to victimhood is as active as any time before.

For about two-months situations have become extremely difficult for the Eritrean refugees, particularly those who reached Khartoum. Corrupt officers are blackmailing them unhindered and asking them to pay hefty amounts of money or face difficult detention in buildings transformed into makeshift prisons. The prisons are mostly located in the Amaarat, Dem, and SaHafa neighborhoods of Khartoum.

A 29-year-old refugee has been detained in such a building until he paid bribes. Now he lives a few blocks away from his previous detention center with a group of refugees. For almost two-months he has been living in a bare-floor crowded room, for two months, he never left his sleeping space. He and his colleagues live on the little food smuggled in by some people, some as charity others bought for exorbitant prices. Refugees who have relatives help others with whatever they can. But Eritreans abroad are exhausted by helping refugees; they have been paying for bribes, ransom, and other petty expenses for decades. Meanwhile, the refugees survive by selling whatever they carry. Many sell their clothes, and women with children, if they are lucky to have any, sell their dowry jewelries. The rest live in a single pair of clothes they wore when they crossed the border long ago.

In Khartoum, the UNHCR is as good as non-existent; some even fear a few officials must be in cahoots with the blackmailers.

Every now and then, men in suits visit the makeshift detention centers and set a court there. Refugees who do not carry IDs are sentenced 200k Sudanese pounds as a penalty and another 50k as a bond to be released. However, even that hefty amount doesn’t guarantee a relative freedom. Chances are they would be caught again in a week or so after their release. The cycle begins and they are taken to the same detention centers they were released from and sentenced again: 200k penalty and 50k bond.

The court is self-evident racket operation; refugees do not get a receipt, either for the penalty or bond they pay.

Those who have IDs from the refugee camps like Shegerab in Eastern Sudan, are relatively free. Others linger day and night in Share’e Wahid (1st Street) in Amaarat neighborhood where the UNHCR offices are located. They hope the UNHCR would issue them IDs to be protected from the blackmailing criminals. The alternative is buying an ID from the market in Khartoum. The ID, known as a Yellow Paper, can be acquired against a $2000 bribe. And there is an Eritrean embassy in Khartoum!

Some helpless refugees approached the Eritrean embassy for help. The embassy personnel told them to “Go back to Eritrea,” though they know they have escaped from Eritrea. The embassy tells them they made a mistake, and they should fill out a regret application for besmirching the good name of the Eritrean regime and return home.

The rounding up of Eritrean refugees, including the old, the young, the handicapped, and mothers with babies, is continuing unabated. “They are taken away in vans and transported to the makeshift prisons while followed by officials in small vehicles from behind.”

Hasseb, a 27-year-old refugee told Gedab News, “The PFDJ doesn’t recognize the refugees are victims of its draconian policies and oppressive nature.”

The refugees do not have any support; they are left to their own ingenuities. Many people we talked to said that “a few refugees are resorting to petty crimes to survive; women are subjected to rape or prostitution to feed their children and themselves.”

Eyob, another 30-year-old refugee said, “the Eritrean regime boasts of its stellar record on improving the Eritrean quality of life and claims it’s spreading peace, equality, and prosperity.”

Meanwhile, “Eritrean refugees are expected to rejoice even if their stomach is empty, and they live in perpetual fear.”