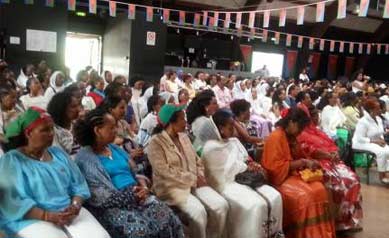 A strange sickness that plagued the Sawa training camp for a few years has made a comeback. Recently, several cases were observed in the remote camps of Sahil region in Northern Eritrea.

Conscripts who went through Sawa military training say that it inflicts only girls.

A survey carried out by awate.com found out that nine out of the fifteen Eritreans who have been in Sawa for more than two years are aware of the sickness.

Based on the description of the sickness and its effects on the afflicted, “It is possibly Dystonia” a rare neurological disorder that affects different parts of the body.

The New York-Presbyterian Hospital website explains that , “…dystonia of the foot may occur when walking forward but disappear completely when walking backward.”

The surveyed conscript narrated many stories related to Dystonia, one of them said, “the few girls who were afflicted by “Rit-Les” walked backwards with us when we moved ahead.” He added, “Somehow the name Rit-Les was coined for the sickness and it is widely known by that name.”

“Rit Les” is an abbreviation of “Ndehrit Temeles,” a Tigrinya language military command equivalent to the USA military drill command, “To The Rear March.”

Neither the Eritrean government nor its women’s franchise, The National Union of Eritrean Women (NUEW), have ever raised the issue of “Rit-Les”; so far it has been kept secret.

Around the military camps in Western Eritrea, it is commonly explained as a spell, and in terms of superstitious beliefs related to old graves around the area.

This year, NUEW has been busy celebrating its 35th anniversary across Eritrea and in many cities around the world where the Eritrean ruling party has a support base.

In 2009, the story of the twenty-five year old Desiree Jennings of Virginia was widely covered in the news; it was claimed that she developed dystonia after taking flu shot.

When shown the youtube video of Desiree Jennings, the conscript said, “the muscle spasm of this woman is bad, for Rit-Les victims it’s not this bad, but the backwards movement is identical.”

It is possible the disease is caused by expired or contaminated medication. If that is the case, the medicine must have been given only to women, “because it could have been medications that only women can take.”