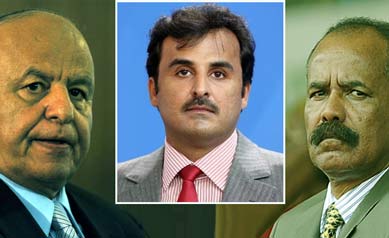 On  Wednesday, August 19, President Isaias Afwerki of Eritrea visited Doha, Qatar, for “bilateral talks” with the Emir of Qatar. President Abdu Rabbu Mensour of Yemen who had arrived earlier in Doha, left a couple of hours after the arrival of Isaias Afwerki.

The Qataris had planned a meeting between Abdu Rabbu Mensour and Isaias Afwerki to resolve the lingering issue between the two countries over Yemeni accusation of Eritrea, that it is provides logistic support to the Houthis.

Ali Ibrahim Ahmed, Isaias’ ambassador to Qatar, had earlier delivered a message to the Qataris that explained Isaias precondition to participate in the meeting. Isais required an official statement from Abd Rabbu Mensour’s government withdrawing its accusation that he supported the Houthis However, the Yemeni president refused to make an apologetic statement and left Qatar after rejecting Isaias’ request.

Senior Yemeni and other Arab officials repeatedly accuse Isaias Afwerki’s government of supporting the Yemeni Houthis, but so far, all of the accusers have failed to provide a concrete evidence to support the continuous accusations.

Isaias Afwerki has used the Yemeni crisis to align himself closer to the UAE at the expense of Qatar, the only country with which he maintains cordial relations.

Both Qatar and the UAE have divergent positions on several regional issues. On the Yemeni crisis, however, they share a common position, and both are members of the Saudi led alliance against the Houthis of Yemen.

According to an observer from the region, “the  UAE military involvement was instrumental in the retaking of Aden and recent advances against the Houthi strongholds.”

So far, though the UAE and Qatar have managed to work together on the Yemeni crisis, they have serious differences over major Arab issues under the surface, including differences over the Egyptian and Syrian crisis.

While the Qatari government had supported Mohammed Mursi, the deposed Egyptian president, the UAE was against the Muslim Brotherhood and now strongly supports President Abdulfatah AlSisi.

Under the late King Abdulla Bin AbdulAziz, Saudi Arabia supported president AlSisi, but under the new monarch, King Salman Bin AbdulAziz, its relation with Egypt’s AlSisi “can be described as lukewarm at worst, and cautious at best.”

In recent months, Saudi Arabia has adjusted its Syrian policy and is now closer to Recep Tayyip Erdoğan, the Turkish president who is still loyal to the Muslim Brotherhood of Mohammed Mursi and opposes President AlSisi. At the same time, Saudi Arabia has revived its relations with the Yemeni franchise of the Muslim brotherhood. Qatar and UAE hold divergent views on many regional issues except on Yemen, and at this moment, UAE’s position is closer to that of Saudi Arabia, the major regional power. It’s not clear how Isaias Afwerki will use the differences of the two countries to leverage his position.

A regional observer explained the complicated relations of Isaias, and the inter-Arab Gulf countries, as relations “that travel on single road, though it’s a highway with many lanes, where each lane is separated by a thick wall, and Isaias’ footsteps are on all the lanes.”

Last April* Isaias Afwerki visited Saudi Arabia on a trip facilitated by President Omer AlBashir of Sudan, to discuss the Yemeni crisis and returned empty handed. However, things could have changed if what the Saudi owned  AlSharq AlAwsat of London reported on its August 19 issue holds water. The newspaper reported:

“Somalia and Eritrea joined the Alliance that is led by Saudi Arabia in its Red Sea operations, and that the General Ali Ahmed Al Tineji of the UAE is nominated to be the commander of the Red Sea operational zone in a time that the alliance’s barges are close to the coast of the Yemeni port of Hodeidah which is located on the Red Sea shores; Yemeni sources expect [a troop] to embark very soon while the alliance airplanes have intensified the bombing of location of the Houthi armed forces and the forces of the deposed [ex-president Ali Abdella] Saleh in the port of Hodeidah and the naval base.”

*Correction: it was incorrectly reported as “Last Month.”