The World Looking At Eritrea And Ethiopia 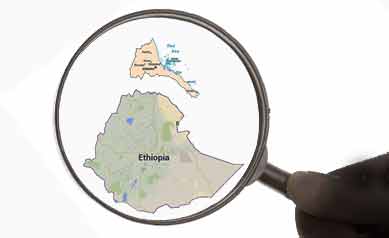 Editor’s Note: Today’s sample is possibly a representative view of the rest of the world regarding Eritrea and Ethiopia. Sometimes, looking at yourself from the perspective of others, particularly in this age of interdependence and globalization, helps with proper self-assessment. We hope this will add to the ongoing heated debate between the citizens of both Eritrea and Ethiopia on their vision of the nature of relations between the two countries. [Clarification :This post is sampled from the Awate Forum (public) and does not represent Awate’s viewpoint.

[I have seen an] interesting sample on the nationalist rhetoric that Ethiopians and Eritreans use against each other. Having visited both these countries (and being fascinated by them) I must admit that this ridiculous nationalistic rhetoric would come up every now and then. Having traveled all over Africa, I can truly say Ethiopia and Eritrea are unique in this regard. Off course these countries are unique compared to the rest of Sub-Saharan Africa in that they have their own unique script and not the Latin script.

In Eritrea I found the nationalism was based mainly (and almost exclusively) on their three decade independence war. That was as far as I could tell the only common denominator that binds the different ethnic and religious groups. I have to agree with the Ethiopians a bit, in their description of Eritrean nationalism being based mainly on anti-Ethiopian sentiments. Still their independence struggle was quite impressive from a military point of view, but it pales in comparison with the battles that were fought by European military when it comes to logistics, strategy, planning, designing of new military equipment etc.

In Ethiopia their nationalism was mainly based on not being colonized (only country in Africa), having a long history of kingdoms and expansionism etc. True, the rock churches of Lalibela are amazing. The castles in Gondar too, but all of the architectural wonders in Ethiopia pale in comparison with Roman, Greek, or other European designs. Simply put, Ethiopia’s history and achievements are amazing for African standards. Thus this empty pride and nationalism that we can also witness in the commentators mentioned in this article is laughable from a European perspective. Just look for example at the scientific achievements (or lack thereof) of Ethiopia. Despite its so called independence of hundreds (according to some 3000 years) it has never produced any geniuses like we’ve seen on numerous occasions in Europe. No Newton, Galilei, Einstein, Leibniz, Van Leeuwenhoek, Mozart, Kepler, Darwin, Marie Curie, Riemann, Fleming, Pasteur etc. etc. etc. I could go on and on about the accomplishments of Europe’s finest mathematicians, chemists, astronomers, physicists, composers and so on. Even European countries that have been very poor and backwards (by western European standards) over the last century managed to produce brilliant minds (Hungary, Romania, Bulgaria, Ukraine, Poland). Ethiopia despite it never having been colonized cannot do that. The same goes for Eritrea. Sure you will find Ethiopian Airlines being a well managed carrier, with state of the art fleet. But that same fleet of Dreamliners could never, ever have been designed and produced from scratch in Ethiopia by Ethiopian engineers and scientists. Same goes for most of the infrastructure being built right now all over the country. When you see a dam, railway, highway etc. being build, one can almost surely find a Chinese or European hand in there.

In the cases of Eritrea, Ethiopia and the rest of Sub-Saharan Africa we should ask ourselves whether their backward political system with its corruption, human rights violations, mismanagement and cronyism is the reason these countries and their people are so backward. In my view it might be the other way around: a backward people will never be able to create a successful society where not only human rights are protected, but also society is able to provide the basic economic/health related needs of its people (roads, railways, a sewage system, hospitals, electricity etc.).

Kenya one (out of many) examples that comes to mind. It has relative freedom in the political arena. Opposition parties exist and they are free to heavily criticize the government and provide alternatives for the public. Newspapers and other media outlets can freely write and share their view of the ruling parties without having to fear harassment. Yet at the end of the day this all is meaningless to the people living in the slums of Kibera or other filthy places throughout Kenya. It is at the end of the day a backward and poverty stricken society, 50 years after its independence and more than a decade after transitioning to a more democratic system it has very little to show for it. Countries like Singapore, South Korea, Malaysia, China, Vietnam etc. all were at one stage dictatorships with little room for opposing opinions, but have managed to become successful societies.

This goes to show that these nationalist rhetoric we see in Eritrea and Ethiopia is based on a very thin layer of reality and lots of imagination. The problem there is not just the oppressive and dictatorial governing system. That system at most can act as a exacerbating force, which increases the already big problems in those countries. The transition to democracy no matter how that would take place could, at best, alleviate the problems of prisoners and their families, military personnel, religious minorities and a few others. It will not however be a starting point for a transition into a developed country.

As to why exactly this is not possible… well I guess James Watson (Nobel laureate in Physiology or Medicine) and Charles Murray (author of the Bell Curve) can answer that question better than I can. Just note that at the end of the day it’s the people that make a society and not their governing system. And witnessing Ethiopians and Eritreans glowing with pride because they succeeded in their independence war against another poor people, or managed to defeat the Italians once with spears and stones is laughable to say the least. My point is that societal accomplishments depend on the makeup of society. These two countries have achieved a lot compared to their African counterparts, but very little in comparison with the achievements up north. I would ask Abinet and all the other Ethiopian nationalist to weigh in on this. The same goes for Eritreans. Do you agree that the biological differences in cognitive ability are the main cause in the great discrepancy between Europe/Northeast Asia and Africa?