Naizghi Kiflu To Be Buried In Asmara 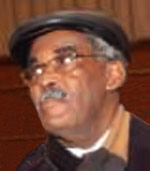 The body of Naizghi Kiflu, a one-time senior security official of Eritrea’s ruling party, PFDJ, and its precursor in the independence war, EPLF, will be flown to Eritrea this week for burial in Asmara.  Naizghi Kiflu died in the United Kingdom earlier this month.

The death of Naizghi Kiflu was not mentioned in any of the Eritrean government media almost ten days after his death in London where he had been receiving medical treatment for almost six-years.

In 2005, Naizghi arrived to London with the understanding of becoming Eritrea’s ambassador to the UK. However, insiders believe that his credentials were rejected by the UK and he stayed there for sometime until he became sick and suffered from a host of ailments including kidney failure. Since then, he had been on dialysis and his health steadily deteriorated.

When his family took him to Eritrea two years ago, he was often going through memory lapses and couldn’t remember people who were close to him. People who visited him believed he was suffering from Alzheimer’s disease.

He told many of his visitors that, “everyone of my comrades visited me except the Pharaoh” referring to President Isaias Afwerki.

When Isaias Afwerki heard of this, he ordered Naizghi’s family to take him back to England to die in peace instead of dying in jail.

Naizghi was flown back to London and stayed there in critical condition until he died last week.

Naizghi Kiflu is a veteran of the armed struggle and has served as security chief, ambassador to Russia, deputy Interior Minister and Minister of Information under the Isaias regime. In 2008, Eritrean human rights activist Elsa Chyrum, with the help of British NGO Redress,  attempted to develop a case against him for committing “crimes against humanity” for his role as Deputy Revolutionary Guard (“Halewa Sewra”), deputy to the Interior Minister (Ministry of Local Government) in the early 1990s, as well as for his role as a Minister of Information in 2001 when he ordered the arrest and exile of Eritrea’s journalists and, eventually, the crackdown against non-sanctioned churches.  British prosecutors interviewed several Eritrean victims in Europe but the case was never brought to trial.