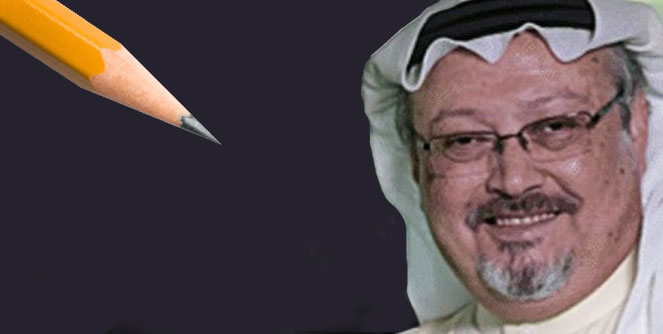 On a March 29,2018 editorial we speculated that if the Saudi heir apparent Mohammed Bin Salman (MBS, so baptized by Thomas Friedman), succeeds in disbanding the religious police, curtailing the power of the religious authority, and allowing women to drive, it would be a welcome change. However, we expressed skepticism that “ the top to down change presented in the prince’s 2030 vision seems to lack mechanisms of accountability and transparency like the disastrous war he is waging in Yemen–the two are hardly based on a winning formula.”

Human right activists and journalists have been outnumbered by MBS’ internet trolls backed by a multi-million PR campaign that presented him to the West as a reformer. Yet, they were supportive of the reform that they have been calling for since decades ago. But lately, they were either imprisoned or exiled.

Many Saudi dissidents are now crowding Western countries where they are more vocal than ever. Sadly, the media covers only the disappearance of high-profile princely dissenters: 1) Prince Sultan Bin Turki, who was kidnapped twice—once from Switzerland (2003) and again from Paris (2106)—his whereabouts still unknown. 2) Prince Turki bin Bandar (police Major) kidnapped as he boarded a Europe bound airplane in Morocco (2015). 3) Saud Bin Saif Al-Nasr kidnapped while on a flight from Milan to Rome but landed in Riyadh.

On Oct 2, 2018, Jemal Khashogji, a prominent exiled Saudi journalist living in the US  was allegedly lured to visit the Saudi consulate in Istanbul—he is believed to have been murdered inside the consulate, where his body was dismembered with bone saws. and moved into the consul general’s residence.

Turkey claims it has an audio-visual evidence of the murder and alleges it was ordered by the highest authority in Saudi and carried out by a 15-member squad of intelligence officers and hit men that flew to Istanbul. The squad included a mortician to deal with the remains of the journalist. According to Turkey, the ‘kill team’ flew to Istanbul in two private jets hours before Jamal entered the consulate at 1 pm. The jet planes flew back to Riyadh a few hours later that same afternoon.

The consulate, however, denies the allegation and insists that Jemal has left the consulate, but failed to provide any CCTV video evidence of him leaving the consulate. Turkish police have not issued a decisive conclusion of where his body allegedly ended up, but reports indicate it was either shipped to Saudi Arabia or carefully discarded somewhere in Turkey.

According to reports, Jemal had contacted the Saudi Embassy in Washington, DC to secure official papers to register his wedding to his Turkish fiancé but he was told to get the papers from the Saudi consulate in Istanbul. The Saudi ambassador to the USA is the younger brother of MBS.

Turkish police have also created a timeline of CCTV clips showing Jemal entering the consulate, but he was not seen leaving the premises. The police also aired footage showing the team of 15 people arriving at the Istanbul airport in private planes and heading to the Saudi consulate in six cars. Many cars, including the six cars were seen leaving the consulate and heading to different residential places owned by the Saudis. The police alleged the squad was the executioners who killed Jemal Khashogji and dismembered his body. Suspicious activities were observed at the garage in the consul general’s residence and the international media is pointing a finger to Prince MBS.

The sixty-year-old Jemal Khashogji has been a columnist for the Washington Post. Formerly, he has been the editor of Al Watan, a Saudi Newspaper, before becoming the general manager of The Arab News Channel, a television station launched in 2015 out of Bahrain was owned by the billionaire Saudi Prince Al Waleed Bin Talal. The station didn’t last long after its first interview with a Bahraini Shiite politician about the cancellation of citizenships of over seventy Bahraini Shiites. In addition to the displeasure of the Bahraini authorities with the interview, the political crisis in Yemen was building. In March 2015, Saudi Arabia started its military campaign against the Houthis of Yemen and their allies. According to Saudi analyst, “the prevailing situation was not conducive to  launching The Arab News Channel.”

Why is Turkey Significant in the case?

The scene of the alleged crime against Khashogji is Turkey, a country that has sided with Qatar in the Arabian Gulf diplomatic crisis involving Saudi Arabia and the United Arab Emirate on one side, and Qatar on the other. However, the real conflict behind the façade is the age-old Sunni-Shiaa rivalry represented by Saudi Arabia and Iran.

Saudi Arabia decided to attack Iran by aggressing on Yemen with the pretext of decimating the Houthis, a Zaidi branch of Shiaa. In 2015 Saudi Arabia assembled a coalition of military forces from a host of client states and launched brutal aggression in Yemen in a campaign it named Aasifet Al Hazm, (Decisive Storm) which has not calmed yet. So far, many Yemeni cities have been turned to rubble and the people are living in harsh situations. Millions have been displaced.

The USA is also involved in the conflict in so many ways; voices of concern and condemnation are overwhelming and are widely covered in the national and social media.

The crisis had its start with MBS coming to power and becoming the de-facto leader of Saudi Arabia. President Trump has been very supportive of the prince and both have agreed on a  multi-billion dollars in arms sales and other investment deals.

Diplomatically, Trump’s son-in-law Jared Kushner has promoted MBS and provided him with connections to the White House. Also, Thomas Freidman, one of the most notable American columnists took leave from his insightful writing, and out of character, delving into a cheap propaganda writing, promoting MBS to the extent that a Daniel Drezner described Friedman’s column as Panglossian.

Several US lawmakers have made harsh remarks, including president Trump, who was considered to be close to MBS. In a statement in relation to the allegation, according to CNBC,  Senator Lindsey Graham said, “If it did happen there would be hell to pay,” Graham said. “If they’re this brazen it shows contempt. Contempt for everything we stand for, contempt for the relationship.” As president Trump told reporters, “we are working very closely with Turkey and I think we’ll get to the bottom of it.”

Also, in a rare bipartisan effort, 22 of the 23 members of the US Senate Foreign Relation Committee sent Trump invoking the Global Magnitsky Act. It forced him to investigate Saudi Arabian official involvement in the murder of Khashogji and report to Congress within 120 days. If and when the person or persons are identified as having a role in the case, the US will have to impose sanctions: visa ban, and asset freeze with or without the president’s approval.

The USA intelligence was also not saved from criticisms. Reports indicate that the US intelligence had prior knowledge of the plot against Khashogji after intercepting communications of senior officials discussing ways of getting to the journalist, but the intelligence authorities failed to warn him about the threats. And after reviewing the US intercepted intelligence report US senator Bob Coker concluded, “Khashogji was murdered and the Saudis did it.”

The wave that started in Tunisia in 2010, then spread to Egypt, to Syria and engulfed all of North Africa and the Middle East was aptly named the Arab Spring. Lastly, it reached Yemen in 2011. However, the popular demonstrations were not only against the prevailing politics of the region, but they were also an expression of the aspiration of the people whose region has been marred in conflicts, oppression, backwardness, and terrorism. One of the main goals of the uprising was to reform the theological tradition that has crippled the region and arrested its development and hindered its enlightenment. Here is where the reform initiative of Mohammed Bin Salman was hailed and at the same time despised.

Not many in the region are convinced by the stale idea of raising Islamic banners in pursuit of political goals, but the few who do are effective. That is what Saudi Arabia and the UAE are doing in Yemen–they have wrapped their rivalry with Iran in a religious garb when it is not. And though the UAE is admired for its developmental projects and for raising the standards of living of their people, lately the Gulf state has an illusion and fancies itself as a great country with imperialist ambitions, expanding ruthlessly and buying out governments. To many, this is reminiscent of European colonialism, the great scramble of territories. But the UAE has a model of greatness it aspires to emulate: if Israel, not bigger than the UAE in population or landmass could be a formidable power that can checkmate the entire Middle East, the UAE can do the same. After all, Israel is not as wealthy as the UAE. That kind of thinking doesn’t bode well with the people of the region.

As for Saudi Arabia, its version of Islam has been wreaking havoc across the region and the world for too long. It has managed to create a class of clergy (intercession and religious leaders are both alien terms to Islam). Nothing happens in Saudi Arabia without a religious justification and the so-called Ulema are always ready to furnish an appropriate one: a text from either the Quran or some select traditional books written by scholars.

Indeed, if Saudi Arabia reforms and tames its firebrand bloody version of Islam, the entire Muslim world would change and that is what many Muslims hope for. But the way things are going, it is a replay of the bloody wars that crippled Muslims for centuries. Yemen is an example of the real reform that Saudi Arabi is capable of leading.

We are very concerned by the Saudi and UAE involvement in Eritrea and Ethiopia, mainly with their open promotion of the Eritrean dictator, and his new enabler the Ethiopian prime minister.

It is inconceivable how MBS could explain the circumstantial evidence suggesting he ordered either the kidnapping or execution of Jamal Khashogji.  After the Istanbul incident, several US investors, media companies, and public figures have started to distance themselves from MBS. They indicated they will not attend the investment conference he is hosting in Riyadh next week.  However, Saudi Arabia has the wealth to make others to look the other way—dictators would do that for less money and will jump to defend MBS.

Inside Saudi Arabia, MBS is being blamed for bringing shame on the House of Saud due to his recklessness, particularly the disastrous war he started in Yemen. Worse, now he is being implicated in the murder of Jamal Khashogji in a foreign land. Many speculate he might not survive the mounting domestic pressure even if he weathers out the international pressure. However, regardless of what happens to him, his brand has been severely damaged by serious consequences.