Presence of Ethiopian Forces In Eritrea 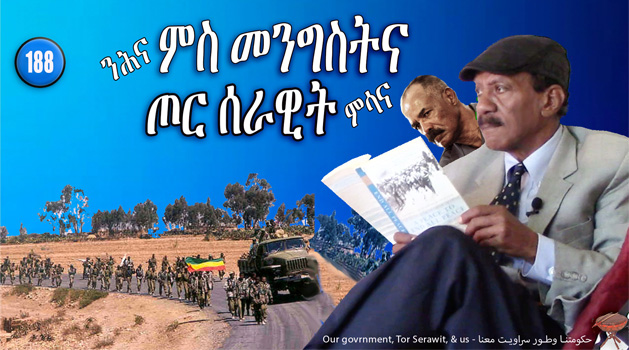 Can wars end? What are signs that wars will end? What was the result of past “wars to end wars”? Is our region hastening Armageddon? Will the war in our region ever end? Who are the actors in the war apart from what we see? What is sovereignty when foreign forces are stationed in a country? What is expected of the people and the national forces?

The Encyclopedia of wars mentions about 1700 wars in history; only about 7% are of religious nature.

Humanity has always suffered from wars and HG Wells wrote several editorials in English newspapers and coined the term Wars to end all Wars. It was the era of WWI and the term was popularized in Movies, books, articles, and songs.

WWI claimed 20 million lives, civilians and soldiers. It didn’t end wars. Twenty years later, WWII erupted. It claimed about 70 million lives, millions wounded and handicapped. Wars didn’t end. Since then, the world big powers accumulated about 23,000 nuclear war heads that can wipe humanity many times over, as if one time is not enough. The world was polarized into two camps, the Western camp dominated by the USA and Eastern block by the Soviet Union. Rivalry between the two caused wars and claimed more lives, for decades.

In 1991, the rivalry seemed to end with the fall of the Berlin Wall. The West seemingly came out  victorious. It declare an era of globalization. The rest of the world suffered greatly and continued to orbit around great powers for protection and support.

Now the world powers are back to finding space in the new alignment—Russia, the inheritor of the Soviet Union is becoming increasingly assertive though there are other players like China. Humanity is facing shortages of food and water, energy, and food to name a few. The incentive that drove aggressive colonialism is reawakened. Whatever we see in the Horn of Africa has to do with the above. Weak nations are entangled in the mess and have become pawns suffering under authoritarian regimes. And danger looms everywhere.

Here are four example to illustrate the risks of having a foreign army in a country, starting with…

In 1975, Lebanon was immersed in a civil war. The Syrian Baath party supported the Christian Maronite forces against the leftist forces allied to the Palestinians. The Arab league decided to send troops to pacify the country and gave the Syrian forces the assignment. In 1976, under the guise of legitimacy that the Arab League provided, Syria sent about 10,000 troops to Lebanon. Israel also increased its military presence in Southern Lebanon. Gradually, both Syrians and Israelis sided with the Maronites supplying them with heavy armaments, including tanks and military and intelligence advisers.

In 1982, Syria and Israel continued to fight each other by proxies to influence Lebanese politics. Both wanted to destroy the Palestinian Liberation Organization (PLO) led Yasir Arafat.

In Lebanon there were old Palestinian camps that become towns; with a goal to end Palestinian presence. Israel and its allies, controlled Beirut. In September 1982, the combined forces committed a massacre by attacking the Sabra and Shatila refugee camps and killed thousands.

That is an example of the risk foreign interference brings to a country.

After some years of tense unrest caused by the Arab Spring demonstrations, in February 2012 the Yemeni dictator Ali Abdalla Saleh was forced to step down. He handed power to his deputy, Abdrabuh Mansur Hadi. In support of the weakened Hadi government, the UAE and Saudi Arabis sent their forces to Yemen. In April 2018, the UAE took control of the Island of Socotra, south of the mainland in the Indian ocean.

Since its beginning, the war was basically between Yemenis sponsored by the UAE-Saudi Arabia duo, and Houthi Yemenis supported by Iran and opposed to the foreign intervention. So far, the damage inflicted on the infrastructure of the country and the lives of its people is immense.

The intervention of foreign troops has crippled Yemen.

In 1991, around the time Eritrea was liberated, Somalis overthrew their dictator Siad Barre. That was followed by the rise of tribal chieftains with militias, warlords, and military strongmen. They competed for power immersing the country into a gruesome civil war.

The UN formed UNOSOM to facilitate the distribution of aid to Somalia. The UN forces were also delegated to monitor the many shaky ceasefires signed by the warring parties. The civil war didn’t spare any forces, local or foreign, including the UN peacekeepers. The US force was the largest of the UN contingent and it soon faced a debacle which is explained in a movie called Black Hawk Down.

There are a many such beginning of foreign interventions which soon became destructive. However, there is without forgetting necessary intervention like in the old Yugoslavia.

Yugoslavia: A Country Divided into Seven

My last exhibit is Yugoslavia where lingering ethnic cleansing and civil war came to the surface in1991. The country was ruled by Joseph Broz Tito from 1953 until he died in 1980. Tito had 11 vice-presidents in the 27 years he ruled Yugoslavia. After the death of Tito, the simmering civil strife worsened until in 1991 it became a full-fledged civil war.

In 1993, the US intervened under the cover of the UN. Arguably it was the only successful UN sponsored intervention in recent history. However, the war resulted in the breakup of Yugoslavia. Starting in 1993, the breaking up continued for some years. By the end of 1990s, Yugoslavia was divided into seven countries: 1) Serbia, 2) Montenegro, 3) Macedonia, 4) Bosnia Herzegovina, 5) Croatia, 6) Kosovo, and 7) Slovenia.

The seemingly innocent intervention in Eritrean affairs by Ethiopia started in 2018. Today Ethiopia has a force of about 40,000 fully equipped soldiers inside Eritrea. Many Eritreans have been conditioned to the situation; when the issue is mentioned, many brush it off as an inconsequential incident, as if it was a discussion of a traffic accident or weather.

The PFDJ government brought back the force through the window. It is the same force defeated in 1991 and pushed out through the door by Eritreans after so much sacrifices. The presence of Ethiopian forces in Eritrea has angered many Eritreans and how they will finally and possibly react to it, is scary.

In the sixties and seventies, the Tor-Serawit used to campaign in the Eritrean countryside to hunt for freedom fighters. Whenever they managed to kill some Eritrean combatants, they brought their bodies to the nearest town and hanged them on poles in the marketplaces. For some reason, they preferred the grain markets… and they forced the public to walk to the market to watch their ugliness in treating the dead!

Then it was time for the Tor-Serawit to celebrate their victory by flocking to bars and local drinking joints for a binge-drinking. Then they burb and murmur: ‘Thank you my God, now it’s time to plunder Libya’. That was in reference to the biblical mention of Ethiopia that will stretch its hands to the sky! Never mind the Ethiopia of the bible is not the Ethiopia created in the 19th century—but no one told them that. Libya had started to support the Eritrean Liberation Front, a move that angered Haile Selassie who referred to Ghaddafi as “that little boy”. His army wanted to plunder it and though they were attacking Libya when the killed the innocent villagers and a few combatants.

How should Eritreans react to the presence of foreign forces in their country? How are the so-called Eritrean forces reacting to it?

If situation warrant, there is no doubt the Ethiopian forces will be involved in the Eritrean internal affairs, just like the UAE in Yemen, The Syrians in Libya, or any other such foreign army present in any country. How should Eritreans react?

All concerned should cooperate in the spread of the concern above and make the rejection of the semi-occupation of Eritrea known. Keeping silent regarding such a flagrant intervention is not condoned by Eritreans. It’s a mere invitation by an un-elected regime that doesn’t represent the interest of Eritreans or their country.

I also appeal to all of you to stop bickering over smaller issues–when there’s a snake crawling over your legs, you shouldn’t worry about a tiny bug in your hair. Focus on the greater risk because you can afford to ignore the minor inconveniences.

This is a call of conscience—not one backed by forces or resources of a political party. This is what is expected of writers, thinker, and activist and hoping all do their part. Will you all do your part? Hopefully, you will.
—-

NB: The above is the transcript of Negarit 188 delivered in Tigrinya on Negarit youtube channel.