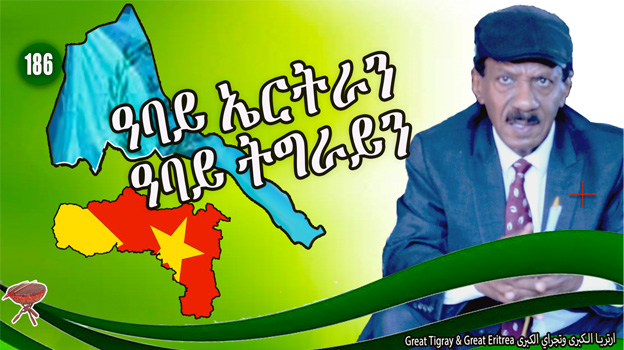 I have been reading some books and trying to see the difference between the traditional Tigray and Amhara perspectives of ending Eritrean independence and swallowing it. Things never change in the South, the historical inter-Habesha rivalry rages on, since 1270–the ascension to power of the so-called Solomonic dynasty. The region still suffers from the millennia-old mythology. But let’s arrive to the here and now. Otherwise, as Ibn Khaldun wrote, it’s “[Blindly] following ancient customs and traditions does not mean that the dead are alive, but the living are dead.”

In the last episode (Negarit 186) explained that I thought I visited Gissen though I didn’t; I mistook the city for Giesing which I visited. But [no-]thanks to social media, I did observe footprint of some action. And not all was gloomy as many thought, there was a moment of joy where I danced enough to last me for two years.

I do not tolerate or believe that the attitudes of the fascists, the vulgar Skunis and Wedini types (Vagabonds and rascals) including the plain stupid cannot represent the Eritrean struggle for freedom and justice. A just cause doesn’t need indecent elements to make a point because it can stand on its own, provided there are enough fine people who have the interest of Eritrea and its people at heart.

Someone who lambasts entire regions and sects simply because he had a fight with an individual of his quality in Facebook, screams insulting “these Christians, these Muslims, these Catholics, Pentecostals, or Protestants’”.

These types are a liability to any struggle and must be restrained if they fail to straighten up and change their behavior. They shouldn’t be allowed to continually embarrass the genuine justice seekers. Unfortunately, the culprit is the failure of Eritreans to create robust disciplined organizations; but hypocritical mobs and bigoted emotional crowds are in abundance.

There seems to be lack of awareness of the gist of activism, diplomacy, and politics. And there is lack of a code of conduct that everyone must abide to before being accepted as an ally. There are many members and organizations with no clear goals or accountable leaders. They are full of loose cannons, unrestrained individuals, neither by the self or the group or an organization. Unusually, they lack dedication and keep jumping from one group to another, to wherever the dancing party is noisier.

The blame rests on the weakness of the traditional opposition, and other new entities that didn’t provide leadership to the confused newcomers. No organized entity is taking initiatives but occupied with endless consultations and meetings. The initiatives are left to the loosely grouped novice activists. Groups scatter soon after they come together, or when the euphoria of a single undertaking ends—mostly demonstrations.
That is unsustainable.

Individuals cannot appoint themselves as spokespersons when not represented by the group they claim to belong to. They must be stopped less they end up damaging or embarrassing it. And those who cannot stand to the level of decency and dedication expected of an opposition member should be pushed out of any organization that respects itself and it goals.

Here are my views on the main aspects of an activist or political entity.

1. National Unity: What brings Eritrea together is their country. It’s a national goal, not a goal of a specific clan, hamlet, village, town, region, or sect. Certainly not hidden or lingering partisan loyalty. One of the main reasons for the current struggle is to guarantee freedom of expression and association for Eritreans. Certainly, passing laws that govern that will be passed. Therefore, sub-national groupings and grievances must wait for the right legitimate environment. Currently, burdening the struggle by raising such hindering issues is counterproductive. It’s damaging for now and in the long run.

2. Rejuvenation: It’s natural for organizations and their members to age; when that happens, it’s time to move on gracefully. Only those who manage to rejuvenate their ranks with new blood can buy extra time. Otherwise, their demise will be unfelt; they will just wither away silently. And if they fail to pass the torch to the young, even their goals and principles will face the same fate.

Naturally, in any struggle, the heavy lifting is a role only the young are capable of. However, that should not mean ridding the struggle of the decades-worth valuable experience accumulated by the elders.

Unfortunately, there is a disturbing phenomenon hitting our region’s activists like a pandemic. Specially those whose reference in a millennium old: mythologies and superstitions that inspire them to obsessively try to erase recent memories and history. They are those Ibn Khaldun considered dead!

3. Camaraderie: decency is necessary in any group activity. Respect for each other must remain an element of paramount importance. However, that can only be cemented by a pact of which the code of conduct is an integral part.

Of course, the justice camp should be able to protect their institutions and associations—when and if it is targeted or if any section of the nation is a dealt with in a malicious manner. Usually when that happens, the restraint is off, and people naturally act in reaction and self-preservation. They embark in a task to expose, confront, and debunk it seriously—all should be prudent and avoid provoking a confrontation

4. Looking ahead: a national struggle for justice should aspire for a modern Eritrea that respects its citizens, abides by the norms of good neighborliness, respects international laws and universal declarations, and is peaceful. The vision should be for an Eritrea that puts the dignity of its citizens over anything else. A citizen not bound by primordial backwardness, free from bigotry, indecency, hypocrisy, and respect themselves and others. Citizens who shun violence, arrogance, and combative attitudes. Citizens who respect human life, whether Eritrean or otherwise.

Such values are absolute and cannot be applied haphazardly and selectively, only driven by partisan or selfish interests. It’s disheartening to see how some educated people argue with straight faces for the demise and disrespect of human beings! Yet they pretend be struggling to advance the wellbeing of Eritrean lives. There are times when a nation must go to war, but that must be a national decision and not a whimsical undertaking by self-appointed rulers.

5. Prudence: Don’t be what you struggle against. Any action that is an imitation of the PFDJ playbook is poison. No justice seeker should be as arrogant as the PFDJ, as vulgar as the PFDJ. As indecent and as unsympathetic as the PFDJ. Certainly not as justice-hater and as diversionary as the PFDJ.

Those who oppose the PFDJ’s behavior, attitude and character must stay away from its manners.

Though the PFDJ loves to hide behind the democratic institutions of the West, the justice camp is no more a pushover. Long gone are the days when a few people struggled only equipped with a just cause. The days when the blue flag was shunned, mocked, and insulted are gone.

Today the genuine Eritrean flag has regained its rightful place> People are learning and remembering how the PFDJ dropped that flag and launched an era of oppression. Then, only a few realized the mischief; it took them a while to realize it. Now most Eritreans know that symbols of oppression can never be symbols of freedom

People are convinced and embrace a cause at different times. If I ask you what time you woke up this morning, there will be very few who woke up at the same time, if any. It’s natural that we wake up when we do, not when a single alarm clock goes off. People have different circumstances, backgrounds, ages, and other factors. It’s Here and Now, and Eritreans are demanding to safeguard their rights and that of their people, including the rights of the neighbors of Eritrea and the world beyond.

The PFDJ reality must be totally defeated: its predatory economics must be dismantled. It’s nepotism-based structures must be disassembled to the last nut and bolt. The traditional pristine aspects of the Eritrean culture must be revived. Elders, family, women, children, the weak, the disabled veterans of the endless wars, and the forgotten refugees must attract the attention of the true patriots and decent people. The sanctity of life must be upheld—only that differentiates human beings from wild animals. And remember, combative and belligerent attitudes among people fighting to establish a peaceful and stable nation is unbecoming. Only then can Eritreans have a government they deserve. And if the Eritreans resources are managed properly, they can replace the oppressive, vulgar, indecent PFDJ. `Trust me, that is doable.