Posted on April 3, 2022 by Awate Team in Negarit, Videos 0 Comments 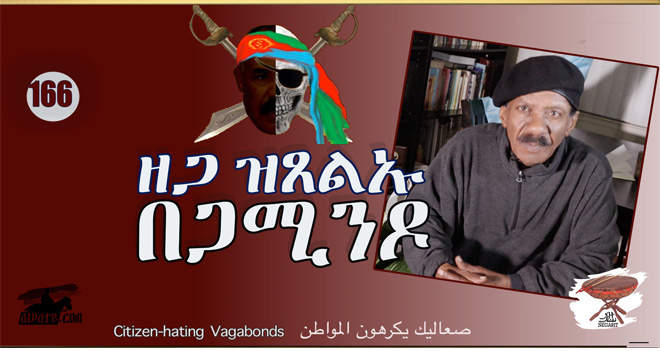 Why are the PFDJ and its supporters obsessed with rivalry, destroying, and eliminating TPLF? They waste their emotions and resources practicing their decades-old obsession? Wouldn’t it be better if they focused on improving the livelihood of Eritreans instead?

One would think, winning inside Eritrea would make them win any other rivalry. However, overextending the meagre resources of the nation and investing all its emotions on revenge results in a disastrous outcome. Even they succeed in their petty battle-projects, they lose because they can’t win over a people struggling to be free.
Emperor Haile Selassie tried it, his successors the Derg tried it on both Eritreans are Tigrayans. They failed. Similarly, any power that wants to squash the peoples’ struggle loses on the long term. Similarly, the assault against Tigray will fail because they’re pursuing a focused single goal and going it in unison–party, and people. Can we say the same about Eritreans? Are they all focused on the same goal or divided between citizens trying to empower the citizens to affirm their rights, and between others cheering the regime to keep its grip on power? Tigrayans have a clear goal: to be stop being treated as underdogs by the central and the chauvinist Ethiopian forces. Why would one have a problem with that goal?

Therefore, Eritreans need to realize Tigray is an Ethiopian territory and Eritreans should stop getting entangled in the Ethiopian civil war. They should be left alone to sort their own problems.

This is the month of Ramadan, a month that requires a spiritual search in the soul, a month for reflection and calm. That’s how it is supposed to be. But some might feel uneasy about such a viewpoint thinking Ramadan is a month of do-nothing when fasting is supposed to encourages believers to reflect and work twice as hard. I abhor bloodshed and shunning war and cruelty. I am addressed the inner good of people, to empower them to seek enlightenment and protect their dignity as human beings—not to bow to any tyrant, not to surrender their freedom to anyone—Ramadan or no Ramadan—siding with the truth is the substance of goodness. And for there are reminders from history that may provide examples to comfort the do-nothing crowd of believers. Here is a list of Battles and conquests carried out during the month of Ramadan.

A few days ago, I found a mesmerizing picture of a street in Asmara photographed and posted on social media by my old friend Ghideon Musa Aron. It’s a photograph of a street magnificently adorned with beautiful jacaranda plants with colorful violet and white flowers. I shared the picture with my daughter. Her reply was, “wowwww! Dad, that is so beautiful”. I teared up because I know what went in her mind.

My children badly wish they could visit the places that I describe for them, the streets where I grew up, the remote villages that no one seems to remember or care to mention. That is because many villages do not provide a propaganda opportunity for the government, therefore, it’s treated as low profile reportage, if ever reported. But cities are good for propaganda—they showcase beautiful skies, rain, pastures, majestic mountains, and flowers, all with a subliminal message hinting all is the result of the good governance and efforts of the regime. They conveniently forget that all that we see are not new, they have always been there, and whatever was achieved cannot be credited to the regime. And we all miss or country. Some want to return home while others wish to have a free visitation right to their birthplace, or their ancestral home. Some have lived with such yearning for decades just like yearned for the end of tyranny. Indeed, after decades-long struggle, Eritrea was freed with unimaginable sacrifices. However, Eritrea’s independence of 1991 turned out to be chaging of hands from foreign tyrants to local ones. The main cause that pushed Eritreans to struggle was forgotten and the country is a situation it wished to be liberated from. And there is an Arabic saying that explains the reason:

كما تكونوا يولى عليكم – You Get the rulers you deserve!

The subtitle is a traditional saying; regardless of its source, it describes the Eritrean dilemma. So, don’t Eritreans deserve better than what fate threw at them, don’t they deserve better after all that they pay. Aren’t they entitled to a peaceful, free life with dignity?

It’s obvious that many Eritreans have betrayed the Eritrean cause. Worse, a portion of the people are still supporting the oppression and injustice befalling their compatriots. Whether it’s consciously or unconsciously, Eritreans are collaborating with the oppressors. But why?

Upon death, the body is separated from the soul and after someone dies their remains are not referred by the name of the dead person, they are simply called corpses. The person and his soul are two separate entities. However, when we are alive, we own our bodies and souls, at least we are supposed to. But why would mature people live like a corpse by switching off their minds? Isn’t it the faculty that makes us see the difference between good and bad, justice and injustice, slavery and freedom, dignity and humiliation, fear, and security? If one cannot discern those differences, they might as well be considered dead. And that is what people need to reflect on, within themselves, and stop living like a body without a soul, without compassion.

Fear has engulfed some people and they are so afraid to do the right thing, or even think rightly. They do not like to think opposite to what their narrow circles, their cult, the people from their village, their region, their sect, and the way the political group they are affiliated with think. They play it safe. They espouse mindless conformity instead of a self-satisfying, universally accepted, righteous, and fair thinking. And comfort is deceiving, those who side with power of the day endorse wrong practices but when they are alone, their principles torment them, alone. They display arrogant bravados and portray confident faces. But deep inside they are scared people. They are fearful of rejection by their peers, by their relatives, by their cult and they submit to conformity. They choose timid security in place of a proud correct position, compassion, and care. That is why they adopt mediocrity as a cover.

A few days ago, someone posted a comment, “we are the champions, you must be feeling bitter!” Okay, last week Eritreans registered exceptional successes in many cycling races. And since everything that happened naturally in Eritrea or happened by the efforts of Eritreans is countersigned to the ruling party, the fearful man acted as if he personally won the cycling races, and he decided that all Eritreans who do not support the regime have lost! Somehow, in his mind, the victory of Eritrean athletes is the victory of the regime he supports! Apparently that posture gave him some comfort, though the winning cyclists could have not boasted that much.
That’s the behavior of the conformists: they take cover in such national events making it their exclusive affair and exclude others. They think Eritrea and whatever happened inside it belongs to their narrow circles and cult.
I wish the little mind is reading (or listening), but I have known Eritrean cycling giants before he or his cult came to existence. I felt good about it before he was started to walk, that is if he was even born then. But the issue now seems to be beyond the little isolationist mind—it’s not about cycling or any other sport, it’s about freedom and justice. They do not realize the regime supporters own nothing more than the rest of Eritreans, be it the blue skies over Eritrea, the pastures in the countryside, the Azure Red Sea. All Eritreans are stakeholders and they do not peddle that as their personal properties. But if people have no personal achievements to show, they pretend they own all national events, history, geography!

How I wish the government wakes up its conciseness and end the unnecessary nightmare it has subjected Eritrean to. There is no need for all of that. What could they feel content by lording over an unhappy people? Eritreans are a suffering people though they are deserving of justice and freedom, not fear, humility, and a life of wars and bloodshed.

Finally, please ask yourselves one question: when is the last time the Eritrean government made any gesture for reconciliation? Did it ever attempt to bring peace among Eritreans, a peace not a façade? Even the occupying regime of the past pretended they had wisdom. I appeal to you to search inside yourself, maybe you could find some, compassion for your people, some guidance to value peace, true unity, and sympathy and you might come face to face with the suffering of Eritreans.