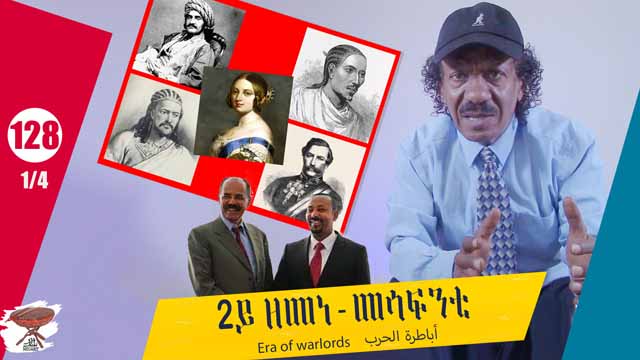 This is part 1 of a series of four episodes of summarized history of the era in which Atzie Tedros, Queen Victoria, King Yohannes IV, Ambassador Hurmuz Rassam, General Napier, Ras Alula, King Menelik II, and King Umberto of Italy were the main actors.

It will not delve into the story of the Mythological King Menelik I, (a corruption of Ibn Al Malik, Arabic, or Ben Melech, Hebrew, both meaning ‘the son of the king’ (Solomon). The mythology claims Menelik’s mother is the Queen of Sheba who gave birth to him at Mai-Bela, a creek that has become a sewerage canal in Asmara, Eritrea.

Here is a summary of the 704-year rule of the Solomonic kings:

In 1270, Tesfayesus (Yekuno Amlak) overthrew the Zagwe Dynasty and became king establishing the 2nd Solomonic Dynasty which continued until the reign of Ras Tefferi (Haile Selassie) whom the Derg overthrew in 1974—that is the 704 years of Solomonic misery in Abyssinia and its environs.

Tedros was a born from a humble background in the village of Qwara and he was neglected for too long in the Ethiopian history particularly during the reign of Haile Selassie. The English were not fond of Tedros who took English envoys and missionaries, hostage. His action was triggered when the queen ignored a letter that he sent her soliciting her support to quell the many internal rebellions he faced and to ward off invasion from across Abyssinian borders. He took revenge on her subjects and other Europeans and took them hostage.  However, there is another version of the story that claim Tedros’ letter was a marriage proposal to Victoria and she didn’t respond to it.

Thus, Tedros unknowingly provoked the invasion of his country; Queen Victoria ordered a military expedition to free the hostages under the command of General Napier. Soon, hundreds of vessels arrived at the ancient Red Sea port of Adulis carrying tens of thousands of laborers, soldiers, pack animals, provisions and even elephants to transport good and arms to the Abyssinian highlands.

At the time, the strongman of Tigrai was Degiat Kassa who was eager to defeat Tedros and become a king. He allied himself with Napier and helped the expedition to reach Meqdela. In a matter of days Napier defeated Tedros who committed suicide to avoid arrest. Napier’s army went into a looting spree and emptied the region’s churches of any historical artifact they found.

Tedros’ three-hut seat of government were in Meqdela, his capital village named after the Palestinian village near Galilee. Magdala is popularized by Mary Magdalene, a disciple of Jesus who hailed from Magdala and she is called Mary of Magdala just like Tedros of Qwara. Some stories indicate that after the battle of Magdala, some British soldiers named their daughters Magdalene and the name caught on.

Tedros was considered a usurper because he didn’t have Solomonic blood in his veins. But once he became powerful, he forcefully claimed a Solomonic pedigree. An Egyptian bishop, Abba Salam, confirmed the claim and crowned Tedros a king. Thereafter, Tedros dropped his real name, Kassa, and adopted Tedros as his crown name. He chose the name because the Kebre Negest, a 13th century book of fables, prophesied that a mighty king named Tedros will rule Abyssinia and he will defeat the Roman Empire that will be eclipsed by Tedros’ kingdom. Never mind that the Roman empire was long gone, Tedros was infatuated by the name. However, the nobility derogatorily referred to him as “Ye Kosso Shach Lij”, the son of the Kosso seller. Apparently, his poor mother raised him by selling a local herbal medicine that supposedly cured stomach infections.

Haile Selassie and his predecessors had that negative image of Tedros and they kept him out of the history textbooks. But in the early 1960s, when officers under the command of General Mengistu Neway attempted a coup against Haile Selassie while he was visiting Brazil, his advisors convinced him to use Tedros as a propaganda to promote the glories of past kings. That is when Tedros started to appear in imperial Ethiopian literature. And a couplet I remember from the school days goes:

Tedros came to power after defeating several of the princes who have been engaged in endless wars. History books say that the Era of the Princes started in 1769 and ended in 1855. But that is a lie; it has not yet stopped, to this day. Still there are princes and warlords in the region: Abdullahi Formajo in Somalia (I hear he was restrained a few days ago); Abiy Ahmed who has been ruling Ethiopia since 2018; and Isaias Afwerki who has been ruling Eritrea since 1991. They are replaying the mayhem of the old Zemene Mesafint. Therefore, if one knows the history of the first era of the princes, it’s easy to predict how the era of the current crude princes and warlords will end.

The Queen of England had dispatched Hurmuz Rassam, a British subject of Iraqi origin, to negotiate the release of the hostages, but he was also taken hostage.

Hurmuz Rassam born in Mosul, Iraq, emigrated to the UK as an adult, lived in Brighton, and became a British citizen. He is known for unearthing the clay tablet containing the epic of Gilgamesh, claimed to be the world’s oldest recorded literature (Part four of this series will be the epic of Gilgamesh).

Rassam was hired by Layard, a British archeologist to work at an excavation site in Iraq and accompanied Layard on several expeditions to Iraq. Rassam made a few notable discoveries but the main discovery was the clay tablets on which the Epic of Gilgamesh was engraved.

Later, Rassam became a diplomat and was stationed in British consulate at Aden. When Tedros took the British envoys hostage, in 1866, England appointed Rassam as an ambassador to meet Tedros resolve the hostage crisis.

He stayed in Massawa for a year waiting for Tedros to allow him to enter his domain. When he finally allowed him to proceed the era of the princes was still raging and, Rassam had to travel from Massawa west to Kassala, and south through Metemma and entered Abyssinia close to Lake Tana and finally met Tedros in Gojjam. At first Tedros received him nicely and sent him some gifts. But then a certain British envoy came carrying letters from the families of the hostages to Tedros appealing for the release of the hostages. The paranoid Tedros suspected a conspiracy and chained Rassam and took him hostage as well. In reaction, the British government ordered General Napier to invade Abyssinia and free the hostages

Unknowingly, Tedros had called for an invasion of his country by the British army—probably the first military invasion in modern times by a country to free hostages. General Napier’s forces attacked Magdala and defeated Tedros and thus in 1868, they freed the hostages who stayed in prison for two years.

General Napier is known as “Baron Napier of Magdala.” His statue stands in the roadway at North End next to Kensington Road.

*This is the translation/script from Negarit 128, presented in Tigrinya on my YouTube channel.