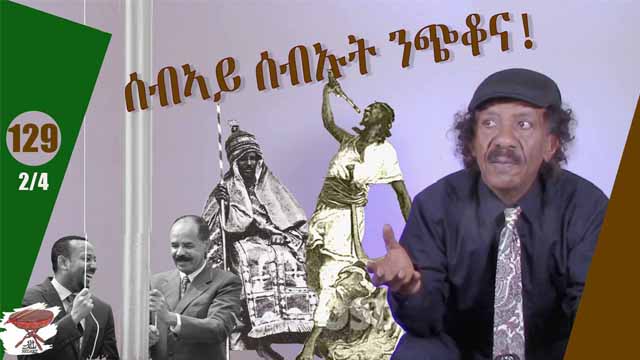 In today’s Negarit 129, I will tell you some additional information about Tedros and Kassa Mirach. For instance, not many know about the differences in the Abyssinian church in the time of Yohannes: Karra Haymanot, Sgga, and Qebaat. Here are ten additional bits of information.

The two most powerful Ethiopian princes in the north, Dajazmach Kassa Mirach of Tigray and Wagshum Gobeze of Lasta, cooperated and aided Napier’s campaign. Two Oromo Queens, Werkait and Mostiat, also helped by blocking all escape routes from Magdala.

The British force occupied Tedros’s fort and found him dead after committing suicide. They cremated his body, and the priests buried his ashes inside a local church. Napier destroyed Tedros’ cannon (Sevastopol) and left Magdala with the loot that he loaded on 15 elephants and 200 mules. They sent loot to the British Library and Museum.

At Senafe, Napier armed Degiat Kassa to the teeth with thousands of rifles and ammunition. John Kirkham, a soldier from the expedition stayed behind and became an advisor to Degiat Kassa and trained his troops to Western military standards. Degiat Kassa became the strongman of the region and soon defeated his rivals, Wagshum Gobeze and Menelik of Shewa. Kassa become an Emperor, assumed Tedros’ throne, and named himself King Yohannes IV, another Janhoi.  But Kirkham was later imprisoned in Massawa by Egyptian forces during the War and died in captivity. The British had disowned him

Napier boarded the Feruza and set sail for England by way of the Suez Canal taking with him Tedros’ son Alemayehu who studied at Cheltenham College and then joined Sandhurst. However, Alemayehu died in 1879 at the age of 19 and was buried near the royal chapel in Windsor with a funeral plaque placed to his memory by Queen Victoria. His remains were since returned to Ethiopia.

Later, Napier became a Governor of Gibraltar (a corruption of Jebel Tariq, named after the Umayyad conqueror Taris Bin Ziad)).

Yohannes became obsessed with a nation of one faith, his faith, with no doctrinal difference between Abyssinian churches. He held a conference in Birru-Meda where he had theologians debate their differences. He even cut the tongue of a priest who argued against Yohannes faith. Soon, he proclamed that those who professed different faiths either convert, leave their country to exile, or face the sword.

The people of Wollo, Tigray, Gondar, Afar, and the Eritrean highlands suffered the most—they were either forcefully converted, were expelled and their properties confiscated, or were killed. Many pretended to have converted but maintained their faith in secret—that is the Taqiyya that many bigots talk about. Here is the meaning of Taqiyya.

In a historical Eritrean Muslim context, Teqiyya is associated with the religious persecution by Abyssinian feudal kings! And since there is so much ignorance about the topic, it’s helpful to unpack all the taboos and explain the situation.

Superstition and Bigotry should be eradicated

If folktales and mythologies are not dissected, it will be left to the bigots to use it in a very crude, ignorant, and twisted way. Many intellectuals and avoid taking about the topic publicly. And the political hacks never acknowledge the historical injustice but double down and keep the bigoted hate rhetoric alive. And their defense is that their ancestors left them the narration—never mind their ancestors could have been the executers of the injustices. I hold that the crude hate-messages are due to the superstitions and justification narrations they grew up hearing for many years.

Sadly, history is always written by the victor while the victim’s narration is subdued. And that is dangerous in building a nation. Citizens should come to terms with their history. Only that helps nations move forward, based on truth that hopefully is followed by a genuine pursuit of reconciliation.

Have you heard the term “Aslam Degezmati”? I will discuss that under a separate title.

The Abyssinian ruling elite never fought bigotry or try to spread knowledge instead. And the political hacks want the people to remain ignorant because it is easier to manipulate and agitate them. What did the Elite of Abyssinia do? That is what I want to expose, and I hope the enlightened will help in this endeavor.

My criticism of the Abyssinian Elite

Firstly, how could an organization that was fanatically socialist, leftist, and progressive, adopt the Monstrous Yohannes as its icon? This shows the Abyssinian psyche that venerates cruel leaders and extols even long after they die. Take Isaias, for instance. Most Eritreans do not extol him because he is cruel and unenlightened, and unfair, unjust. But many Abyssinians seem to be inspired by Yohannes, and by Fithe-Neggest, and Kibre-Negest, the books of fables and superstitions. That’s why many Eritreans, the product of the anti-occupation struggles and liberal values, view anything Abyssinian with so much suspicion. I hope they would be brave and honest enough to acknowledge the historical wrongs committed by such men and counter the superstition to enlighten the people and start a healing process: a reconciliation that has been neglected for ages.

How would a people aspiring to be free venerate cruel leaders? It would be like a German or Russian democrat venerating Hitler and Stalin. Unfortunately, that is common in our region. Jesus could have been talking about the leaders of our region when he said, those who “take the sword shall perish with the sword.” Mathew 26:52.

In the first days of Abiy, I hoped he will acknowledge historical injustices and start to undermine the superstitions. Sadly, in no time he went primitive, theocratic, and revived monsters like Haile Selassie and Menelik, as icons an inspiration, and raised the sword. I immediately discovered his character, and I am glad I did. But that doesn’t give me solace for no one can bring back the victims of the bloodshed or heal their wounds. How about the PFDJ?

The Superficial nation building of the PFDJ

You see, I am obsessed with reconciliation, the right reconciliation not the superficial one like the PFDJ uses. To that end, I have written a lot, including a 120,000-word book “Of Kings and Bandits”, written like a novel, to avoid boring readers with dates and dry facts. That is to help people be interested in history and solve problems after knowing the root-causes of our current problems and failures. And my video programs are to serve that goal.

History is where nation building should start, from the psyche. A misinformed national psyche doesn’t help in nation building. And knowledge cannot be attained in military camps like Sawa, by indoctrinating the young with propaganda. It should be based on truth, by teaching liberal arts and history that builds rational minds; knowledge, not indoctrination, and a will to build a just free nation.

I trust Eritreans are determined to continue building their nation. They have sacrificed a lot for that and still are. However, our main enemy is not someone with a gun; it’s someone with a rusted mind and a damaged psyche. The good book says, “the Truth shall set you free’. Here I will share the truth that I know of, and I hope everyone thinks about it on his own, discuss it with their compatriots, and fight every bigoted idea, and every demented person, until Eritreans establish a nation that they pursued for decades. And that is getting closer by the day. Just think about long term objectives without forgetting the core issues… the little temporary debacles and tragedies will pass, but the nation will live on. That is the struggle that should never be forgotten when people are engaged in other temporary struggles.