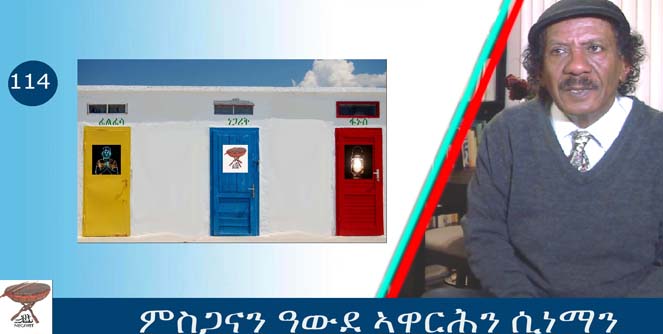 The following are today’s topics of Negarit 114:

1. The Arab and Abyssinian counting of time is similar, and the origin of Gregorian calendar.
2. A popular saying, if you don’t thank human beings, you are unable to that God.
3. How watching video in a channel, you haven’t subscribed to and how it is like getting into a cinema house without a ticket.
4. Request for a feedback for a new short segment about languages and general knowledge.

I always say certain aspects of Abyssinians and Arabs are similar. But some prejudiced people feel uneasy due to traditional perceptions and over politicize languages. Worse, they deny any relation to the Arabs but are vocal when they want to highlight their ties to the fair-skinned Arabs and want to show superiority over other Africans. For some reason, they are worse than a declared white supremacist in their aversion to dark skin. That when they are of a middle eastern stock. That has its origin from the superstition built around the Queen of Sheba, the Solomonic lineage, and the biggest myth of the Kibre-Negest in which one can find the source of the present superiority complex among the Abyssinian elite. I will address that in detail is the future. But now let’s go to a glimpse of the history of the Gregorian calendar.

The Ethiopian day starts at sunrise and they start counting time from 1 O’clock. After 12 hours, the finish the day at 12 O’clock and start the second half of the 24-hour day at sunrise, I O’clock.

When I first arrived in Saudi Arabia, I was surprised to find out that the Bedouin Arabs used the same Abyssinian time counting. Even when their watch read 12 noon, they read it as 6 O’clock. The system seems practical to Ethiopian and Arabs because they live close to the equator where the length of day and night stays the same throughout the year, unlike Scandinavia where the length of day and night changes drastically.

The same goes with Ethiopian calendars that replaced the Julian colander around 24BC. That is why today, January 1, 2021 if the Abyssinian New Year which is seven years behind the Gregorian colander. However, the calendar that most of the world uses is Gregorian. In 1582 Pope Gregory wanted to enable Christians to celebrate Easter on the exact date and he though the Julian calendar was off by a few hours.

Today I didn’t want to raise the PFDJ, but here it is, can’t resist it. To understand the quote, imagine Isaias discovering a protégé betrayed him, and imagine him saying, et tu whatishisname! The quote is said when someone discovered his close friend has betrayed him. Julius Caesar died of 23-stabs by members of his senate, one of the stabbers was Brutus, a deed that surprised the Caesar.

Be Gracious, Not thankless

As I record this episode, Negarit channel has reached 17,000 subscribers. Building the channel was not easy but you my audience made it fun and rewarding. Thank you

I spend a lot of time researching topics, shooting, editing; and postproduction is the most time consuming and exhausting task. I go to a great length to produce topics that I hope my audience approve of–I would like to see a confirmation of that.

Having a loyal audience in great numbers is tricky; I do not depend on any sect, region, or of groups of specific political persuasion. My programs are meant to serve the Eritrean cause, and I focus on helping build a strong liberal democratic constituency. For that I depend on the citizens’ causes. AS you know, the social media map is very congested and at the end, only what the audience wants can survive.

Now allow me to thank a dear friend I came to know through Negarit–one of the benefits that I feel proud of. The friend sent me some old Quran books, 2 LouHs (the traditional wooden Tablet used in primary education), and other items. I am grateful for that and other gifts that my friend sent me though I cannot mention the names since I do not have a permission to do so. So, I preferred to make my appreciations publicly known.

Incidentally, I was trying to make a louH to use it as an aid in an episode I planned to present about Eritrean traditional primary education that many of us went through. Now I have the louH, an original one. But now let me ask you for a favor…please listen on

Once upon a time a king decided to have a place where his people can learn and be entertained. He built a large hall with rooms whose doors were painted with different colors: red, green, yellow, white, black etc. Each room had a different specialty: dramas, music and dancing, stale copied rumors and news, hyperbolic duels and personalized attacks, jokes, educating photography, computer programs, sports, etc. Each room had a presenter. When you come to the entrance of the hall, you find a counter displaying tickets of many colors corresponding the doors of the rooms inside. If a people know the color of the room they are going to, they buy a ticket of their choice and get in. If they don’t know, they ask for the door color of the room they want to get in and then but the ticket. Negarit has a room in the hall, a room with a blue. And now I am looking at the audience, some of them do not have tickets. Okay, I will tell another story and you will know who doesn’t have a ticket and who does.

WE had a cinema house In Keren though there are many who think Keren is so small a town it couldn’t have had a cinema hall. Three people managed the cinema. Ayya Kidane, the projector operator, the man who switches the lights on and off and respond to the audience shouts of Quadro-Quadro and whistling if there is a projector mishap. Ayya Negusse the ticket seller and cashier, and Ayya Abraha the door and ticket controller.

When Ayya Kidane is about to start running the movie, he will climb the stairs to the projector room, Ayya Negusse will star to count the money and prepare to close while Ayya Abraha will pull the curtains on the door to make the hall dark for the movie. He then walks away from the entrance to stretch his legs. Meanwhile, there were boys who didn’t have the ticket money and will stay in hiding until he walks away from the door. Then once they are sure he has given them his back; they dash to the door and enter the hall without a ticket. Buy Ayya Abraha had a photographic memory and remembers everyone who had entered the cinema with a valid ticket. A few minutes into the movie, Ayya Abraha goes inside the hall and makes rounds through the aisles checking the faces of the audience. And despite the darkness, he identifies those who sneaked in and pulls them by the ears, and klicks them out.

Now let’s go back to the hall of entertainment built by the king.

I have neighbors in the hall in rooms managed good colleagues like Yoel and the few others. Don’t be surprised, they were there in the ancient times, now they are living their second life, consider it a reincarnation, but they are not young, but living their second life. So, my room has a blue door and inside it’s cozy. When all the tickets in the outside are gone, the blue tickets do not sell well, and I must receive a few—I do not know anything about other stuff but what I deliver.

Do you know that only about 45% of subscribed people watch my videos? This is a two-pronged problem. 1) those who subscribe do not check the notification bell and do not know when a I upload a new one. “Please Subscribe and click the bell notification as well. 2) Those who have not subscribed are simply stingy. Why do I say that?

I am not good at Math; I am limited to the “Medemer” exercise I learned from the Ethiopian Prime Monster. And the YouTube algorithm accounts for many factors for a video to appear on the browser, on the related videos, or on the Next in line when you are watching. A few things drive that benefit: the subscribe, share and like buttons. If you watch Negarit, there is no Aya Abraha to remind you that you are watching without a ticket. Just subscribe on your own and help grow this channel—also, activate the Bell Notification, Share, Like, and all. It’s just a few clicks and it helps your fingers in case you want to learn the Krar, the Piano, or the guitar. I will count on you; let’s build this channel together if you feel the message and quality is up to your expectation and you want it to grow. And thank you in advance.

My audience asks me to cover many topics; I wish I could do all. But I have been thinking of squeezing some in between the main topics in response to their requests. I will squeeze in a 1-3 mints segments in every Negarit Episode. Tell me your views and suggestions on how to improve it or whether you think it is a good idea or not.

Today’s Mezza is word comparison between Arabic and Tigrinya words. And here is an example of what I intend to do. Please it is not an in-depth linguistic presentation but general elementary topics that you can use as a steppingstone for further studies and research, or as a general knowledge.

There are patterns on how Arabic words are related to Tigrinya. For example. Arabic words with tza sound change to ts in Tigrinya: Azafir = atsafir (fingernails) Zelam = Tselam (darkness). On anatomy, the pattern is that most Arabic words become Tigrinya when (i) is added to the last word. Ayn = Ayni, Ezn = Ezni, Azm = Atsmi, Raas = Re’esi, etc.

Today was almost a PFDJ free episode but who is in a hurry? They will not stop their wicked deeds and we will not stop talking about it. For today, Happy New Year to all.