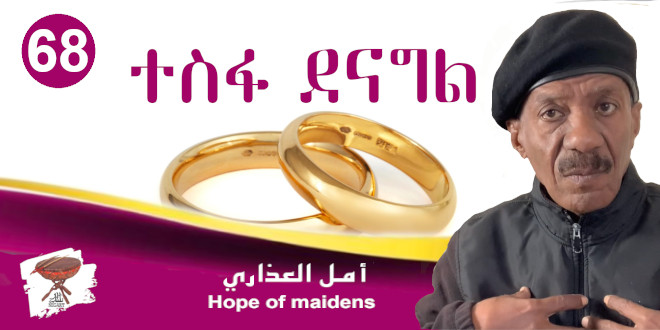 Tesfa Denagil is a very light shower, a shy rain, that comes just before the farmers begin ploughing their fields. Tesfa Denagil is a sign of good rains which means good harvest and prosperity. The cows will be well fed, there will be ample milk, butter for food and other necessities. That also means the next wedding season young people will get married in lavish wedding ceremonies and establish a family. The young bachelors are on the look out, maybe they have already set their eyes on a maiden. While the maidens giggle happily dreaming about their loved ones becoming their husbands. It is the season of “Hope of the maidens” and a busy season for the entire family. We will return towards the end  …

I don’t how many times I said this but I will keep repeating this until some people understand my intentions. Allow me to repeat that: my interest in sectarian mannerisms, behaviors and tradition, and politics, is limited to how that affects the Eritrean struggle. And I see that from the perspective of the struggle for dignity, freedom and rights. I have blind-spots and I do not see it from other angles. Therefore, those who try to criticize me from doctrinal angles, or purely from ‘I-have-the monopoly-on-such-topics’ attitudes, are actually pouring water in a holed barrel.

We have problems with the primitive and superstitious traditions of our region that influence our society. I am all for positive influences, but trying to push an already undereducated, economically and socially backward society, to the middle ages, cannot be ignored. The assault on our own indigenous cultural values is damaging. That is because we have kept our religion intact for 1400 years and we are very comfortable in our skins. We do not need reactionary cultures from the past to be imposed on us, in this age.

It’s irritating how our social discourse has been overloaded with unnecessary arguments. Worse, there are many who would not express their views without throwing empty rhetorics quoting a narration and scriptures. They support any argument with theological snippets unrelated to most topics, just to bolster their argument and to intimidate their interlocutors by pretending they have God and the Holy books on their side. It’s a dilemma, even if one tries to avoid getting entangled in such arguments (they are not debates), still, one feels like a hostage.

I do not buy into Hadith wholesale, a mixed bag of unauthentic, suspect, or simply irrational selections to serve an argument. In short, truth can be contested, but no one can claim sole ownership to it. More brief, I do not believe in every traditional story, or superstition, simply because if comes wrapped in a religious garb. Then the Wahabbis insult Sufis calling them grave worshippers! Really? What an arrogant and foolish assertion.

There is an exclusionary saying that the fundamentalist attribute to the prophet. They claim he said, my nation will be divided into 73 sect all of which are destined to hell fire except one. And the Wahabbis imply they are the chosen sect!

I do not believe in any of the Wahabbi superstitions that are taught in schools and colleges and universities and on Fetwa dispensing television shows. It’s just laughable. For example, the hat I wear is unacceptable because it has a “refref” (sun-visor). Hats without sun-visor (refref) are fine! So says a Wahabbi cleric, the late Bin-Baz who tells many irrational and awkward stories…..

There was one story of an African student in a dorm who was annoyed with his mate didn’t close the door behind him—“The African stretched his hand across the room to the door and slammed it shut. Maybe it’s an elastic limb. And then, many of them insult the Sufis whom they Suffis call grave worshippers. But the Sufis could mock and laugh at these kind of superstitions. I am a Sufi, never saw anyone worship a grave.

In short, superstitions are a legacy of humanity, regardless of creed or belief. It flourishes among the uneducated, primitive societies. But even when societies became educated, the superstitions are elevated to a palatable level, modified, improved with an entertainment value. That is why we have Harry Potter like stories. Superstitions have nothing to do with Sufis or non Sufis. But the Wahabbis have institutionalized superstitions and promoted them as an integral part of religion. Still, that wouldn’t be as bad as having politics mingled and promoted as religion which the Wahabbis have been perfecting for centuries. Superstition is not the domain of specific individuals people or sects, it’s a malady of all humanity, mainly the non- educated.

Now since everything in my content is supposed to be related to Eritrea, what does all that have to do with it?

We see complaints that Muslims are not turning out in meetings in satisfactory numbers and that the movements are not representative of the Eritrean social makeup. That is true and Eritreans face it all the time. Frankly speaking, the overwhelming number of meetings and activities are carried out by Tigrinya speakers. But does the attendance prove the actual social makeup of the population as the naïve wants to believe? Could it be that the non-Tigrinya speakers do not feel at home in the meetings and feel they are being taken for granted? Is there something wrong with the non-Tigrinya speakers that they are not attending in the activities in significant numbers? We have to find the answers if we are to move forward.

Didn’t I tell you that we have the Wahabbi sect and its equivalent sect among the Christians? If you did not yet believe me, I will present more arguments.

The two are both conformists, always on the side of the authority, any authority. While the Christian fundamentalists supported the PFDJ, for sub-national reasons, and it still does, the Wahabbis shunned any activity outside religion. They consider a struggle against the regime as the politics of vanity, and they do not want to get involved in it. They use so many ways to discourage people from getting involved and provide a refuge for the closet supporters of the regime. That is why leaders of the huge Muslim organizations discourage their members from engaging in the struggle. Their excuse? “We have regime supporters among us and if we get involved, we will be divided”! So what? Shouldn’t you be divided along the lines of those who support justice for Eritreans and those who don’t? Why should Eritreans be blackmailed between wanting to belong to a community and between struggling against the unjust regime?

This is sad when we consider the role of Muslims throughout history. We didn’t have a meeting of Muslims where justice, charity, and spirituality was not raised.  History is testimony to the patriotic role of Muslims who were always in the forefront of any national struggle. What happened for Muslims to go through such a regression?

The Christian fundamentalists mostly use scare tactics. They preach, “if the PFDJ regime falls, the Jihadists (all Muslims are portrayed as such) will take over power, our legacy, and the harvest of our struggle will be lost”… and they use emotional blackmailing terms like, “Isaias is our son, the child of our sacred cow.”

These are the kind of people you find in the forefront of many PFDJ activities.

The two groups have done enough damage. They have emasculated many Eritreans who are now inactive in the current struggle against injustice. And when they see the tides turning against them, they join the justice camp in droves and want to take over everything, and be in charge of the struggle on a part time basis.

Final word. No struggle wins without being organized, and no Eritrean organization that doesn’t reflect the diversity of Eritreans will win. Until recently I advocated for people to just get organized and continue convincing others to join in order to create a critical mass. Just do it regardless of your sect, region or anything else. Now that phase is over. We have to create organizations that look and smell like Eritrea. Therefore, the following are needed.

Unity starts from the heart and should be followed by deeds. Unity is not something you shout, like an empty slogan, without the will to provide what it takes to be united. Firstly, one needs to recognize that every Eritrean is equal to another. They have the same rights and obligation. Eritrean identities should not be covered to make others feel comfortable. If some people are not willing to recognize the multiple layer identities of others, they are not ready for unity.

Today the weather is just like the weather of Tesfa Denagil in Eritrea. It’s 2 pm and the light showers have not stopped since early morning. Looking tat it, I remembered the hope of maidens, and I said to myself, could this be Tesfa Denagil, could it be a sign that we will finally have an Eritrean national wedding?

I know what you are thinking—it’s superstition. But it’s the good type of superstition, like Harry Potter. Stay positive