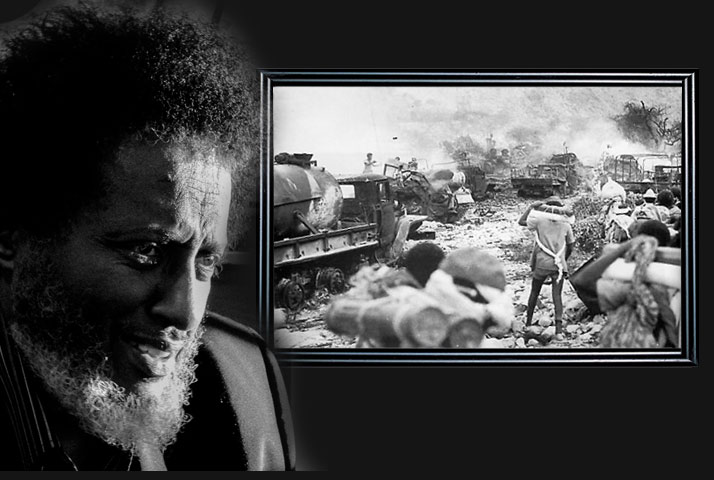 It is embarrassing to witness, in this day and age, abnormal developments creep into our campaigns for human and democratic rights of Eritreans. The aim of the sectarian and ethnocentric maneuver is to sow discord between groups, loosen our Ghedli-history that binds us together and then destroy the social fabric of our communities. The Agazian extremists think that religion and ethnicity provide them with the general model that they have of themselves and their world. Well, they are wrong because Nakfa proved them wrong time and time again. Allow me to clarify my point.

The aim of the promoters of these prejudiced values, simply stated, is to change the course of our Ghedli experience in order to appropriate more maneuverability for their crusades. Moreover, take the Ghedli mind-set off the Eritrean identity then he/she will not stand on his dignity. This fanaticism, as far as they are concerned, is what will feed discord and division among us. And that is precisely why we must play an active role in opposing hate sermons and extremism that are being unpacked in our backyards.

The falsification of our history, through efforts exerted by these so called Agazians, pure racialists, is a disgrace, to say the least. The notions they have espoused and are advancing show that they have an obvious interest in a neo-Unionist position.  They do not realize that attacking the credibility of our historic memory will backfire on them.

I am in no doubt that we Eritreans know about and enamored of our history. We know it is a history full of heroism.  However, there is also another side to our victory.  In 1991, as we immersed ourselves in the exhilaration of our victory other forces went to work which would prevent us achieving a true victory – that of democracy and pluralism.  Instead, those forces, under Isaias Afwerki’s leadership, short-changed us, ushering in the politics of the victorious.

The victorious, as it evolved out of the progressive Ghedli into PFDJ, transformed itself into an authoritarian political party that dominated the post-war politics of Eritrea. It was not created around the need to win elections, but rather, as a highly regimented military organisation, its aim was to consolidate power. Sadly, the future that was supposed to ensue after liberation was all based on fake promises.

Now we find ourselves in a different era all together – an era which is eroding that numinous history.  Regrettably, the dark post-independence era that has dawned on Eritrea has so unsettled many of us it is making us forget how our prized success was achieved.  Alas, we are also seeing that some individuals who are angered by the disastrous developments in the country are beginning to challenge and refute facts of our history. Personally, I cannot deny the various components of my national identity which is shaped by our struggle, is important to me. However, I cannot afford to allow my frustrations and indignation at the prevailing injustice get the better of me.

I do not agree with those who totally blame the past for today’s pains. I still believe that Eritrea’s future is rooted in its past. The reason I am exalting our pre-independence history – at least a good part of it – is due the fact it is the only one I am familiar with.  Many Eritreans of my generation either played a part in, or lived through, the painful 30-year war for independence. Many more supported the revolution and contributed towards its historic conclusion. Moreover, many of us have siblings, friends, relatives and loved ones who took part in the raging conflict in the battlefields of Eritrea. The majority of the fighters are still with us – some are still serving the current regime and others, unhappy with the way the Eritrean dream turned out under PFDJ’s leadership, have turned their back on the Government of Eritrea, but not the struggle for independence.

In these times of adversity I think of what Nakfa means to me. I am reminded of how Nakfa sustained a series of persistent attacks by the Ethiopian Army during late 70s and 80s. In my mind’s eye I can still see our freedom fighters’ trench line that was dug in around the Den-Den Mountain which was crucial in the defense of Nakfa.  I know the successive battles and counter offensives carried out to defend the Nakfa front came at a huge price – the costs simply defy imagination. What I can say is that Nakfa became the most potent symbol of resistance because the Ethiopians, even with the help of air power and massive support from the Soviet Union, could not break its defenses for years.

When I think of Nakfa I think of Omar Sefaf, the veteran fighter who joined the independence struggle in 1966. During the Nadew offensive he was the Battalion Commander within 13th Brigade, 61st Division. His fellow combatants tell stories of how he fell in Harat Harmaz, mountainous area of Sahel. Again, when I think of Nakfa my mind goes back to the memories of wedi Naf’E who was full of youthful exuberance. He loved sports, and by far, the best runner in his unit. His friends say he was a brave warrior. In 1985 he fell in defense of the Nakfa front. His fellow-combatants still remember of the words he uttered before he took his last breath. Wedi Naf’E is survived by Keriya Hassan, his wife, fellow combatant, and their son who still remains attached to Nakfa through his father’s blood and burial ground.

We seem to be confused about many things these days, including our relationship with our own history. And I think that is to be expected as doubts and revisionist attitudes are corrupting the minds of those who lack self-confidence about the eventual success of our current campaigns.

To witness a characterless campaign by those who have taken pseudo-position is an embarrassment, to say the least.  It is strange to see them embark on endeavors to reshape history by belittling and repudiating past realities and by ignoring the essential facts of our nationalist struggle.

How can one forget the voluntary forfeiture of one’s right to life in order to save fellow comrades? How can one forget the overwhelmingly austere conditions that engulfed the young fighters, the ululating female combatants who marched into battlefields so valiantly? The soulful music of resistance that moved our hearts, and most of all, the mothers who stood upright in the face of their children’s bitter martyrdom still resonate with us.

The spell of Nakfa will not, and cannot be broken by such distractions. As the detractors are horsing around with the Tigray-tigrigni aspiration, which is sterile in nature and a gift to PFDJ, attempts to detoxify its proponents is a waste of time. This malformed phase of our struggle, like many false prophesies we have witnessed in the past, will fade away in due course. I am moving on self-confidently because I know Nakfa is on my side. I can hear it say: no to sectarianism and ethnocentrism!