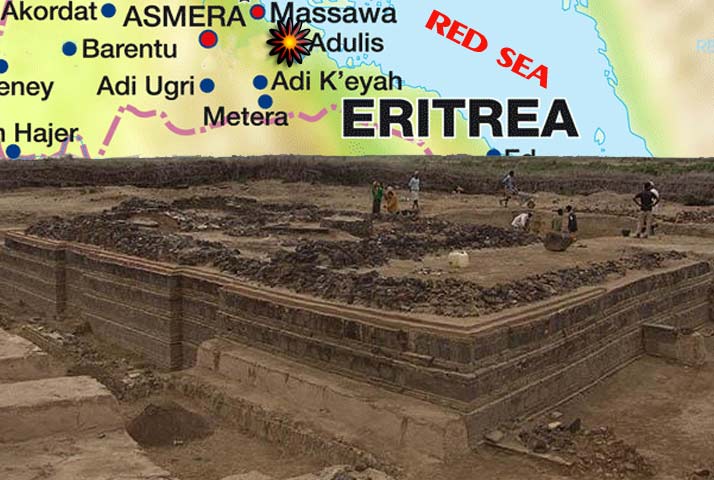 The ancient port town of Adulis or Aduli buried in a helluva of sand is not standing. You may not see its ancient monuments displayed in books and magazines. Its artifacts may not be as ubiquitous as some other historical places.  It may not have been thoroughly excavated and studied by archaeologists and historians like other ancient sites in the Horn region. And, through all these years, it has yet to engender a historical perspective that one may dub as an ‘Adulisian paradigm’ that identifies it as the epicenter of an ‘Erythraean civilization’ located about thirty miles south of the port city of Massawa in the Gulf of Zula.

Though Adulis may have undergone initial surveys and archaeological excavations spanning the years of 1840 to 1962, the artifacts of these excavations are still in Ethiopia. Eritrea, after its independence, has petitioned the Ethiopian government to return these Adulisian artifacts. To date, these petitions made by The Eritrean National Museum has been denied.[1]

Adulis was certainly a unique ‘port-town’ unlike any other Axumite towns, with sizable buildings and a wealthy international commercial community. The large structure that was discovered a long time ago from the relics of Adulis called “The Palace of Adulis”, potteries and wine amphorae imported from Aqaba and fragments of glass vessel found in the lowest layers of Adulis similar to those from the 18th dynasty of Egypt, attest to this depiction of Adulis. The fact that those tall obelisks and steles are conspicuously absent from these earlier and preliminary excavations bespeaks of one and only one thing, which is: Adulis may have been under the Axumite influence and maybe sometimes under its suzerainty, but continuously an integral part of the Axumite kingdom, it was NOT.

The pervasive paradigm in the historiography of the Horn region has been underpinned by an Abyssinian narrative that punctuated more on an empire that extended onto a boundless confines stretching from Congo to Egypt and India. This Abyssinian chronicle puts Adulis smack-dab at the middle of the Axumite kingdom and subsumes it as an integral part of this very kingdom. As a result, Adulis has been studied as part and parcel of the Axumite kingdom by most, if not all, scholars of the region. The question that has not been investigated and looked at seriously is this: was Adulis the epicenter of a kingdom that was NOT a part of the Axumite kingdom? Was Adulis the seat of a king who was independent of the kingdom of Axum?

The Periplus of the Erythraean Sea

This is how this manuscript narrates and depicts Adulis and the region under its control or influence around 100 CE.

“Below Ptolemais of the Hunts, at a distance of about three thousand stadia, there is Adulis, a port established by law, lying at the inner end of a bay that runs in toward the south. Before the harbor lies the so-called Mountain Island, about two hundred stadia seaward from the very head of the bay, with the shores of the mainland close to it on both sides. Ships bound for this port now anchor here because of attacks from the land. They used formerly to anchor at the very head of the bay, by an island called Diodorus, close to the shore, which could be reached on foot from the land; by which means the barbarous natives attacked the island. Opposite Mountain Island, on the mainland twenty stadia from shore, lies Adulis, a fair-sized village, from which there is a three-days’ journey to Coloe, an inland town and the first market for ivory. From that place to the city of the people called Auxumites there is a five days’ journey more; to that place all the ivory is brought from the country beyond the Nile through the district called Cyeneum, and thence to Adulis. Practically the whole number of elephants and rhinoceros that are killed live in the places inland, although at rare intervals they are hunted on the seacoast even near Adulis. Before the harbor of that market-town, out at sea on the right hand, there lie a great many little sandy islands called Alalaei, yielding tortoise-shell, which is brought to market there by the Fish-Eaters“. — Periplus of the Erythraean Sea, Chap.4  [2]

According to the Periplus, the ruler and king of Adulis in the 1st century CE was Zoscales, whose rule was depicted as:

“And about eight hundred stadia beyond there is another very deep bay, with a great mound of sand piled up at the right of the entrance; at the bottom of which the opsian stone is found, and this is the only place where it is produced. These places, from the Calf-Eaters to the other Berber country, are governed by Zoscales; who is miserly in his ways and always striving for more, but otherwise upright, and acquainted with Greek literature”. —Periplus of the Erythraean Sea. Chapter 5 [2].

Through this very account one can see that Zoscales was a ruler/king of Adulis and other lands. However, many an Abyssinian historian is not deterred by this compelling corroboration and they have not ceased and desisted from their efforts of ‘Abyssinizing’ or ‘Habeshizing’ Zoscales. They have even tried to identify him as “Ze Haleqa”, one of the kings in The Kings List of the kingdom of Axum. Having failed to make a plausible connection of Zoscales to the kingdom of Axum, now some are trying to trivialize and derogate Zoscales as nothing more than ” a petty king whose power was only limited to Adulis”. [3]

A throne is deeply buried under the sands of Adulis that has heretofore not been excavated. This third century AD monumental throne has inscriptions in Greek and G’eez written in Sabean alphabets carved onto it depicting the military campaigns of an Adulite king (ኣዱሊሳዊ ንጉስ). These inscriptions were not dug out and found by archaeologists. Rather, it was copied by a sixth-century Greek traveler-monk named Cosmas Indicopleustes into his book,Christian Topography.

” This anonymous inscription only survives in the copy made in the early sixth century AD by Kosmas Indikopleustes at Adulis (Wolska-Conus 1968: 372-8).

. . . and after I had commanded the peoples near my country to maintain the peace, I entered valiantly into battle and subdued the following peoples; I fought the Gaze, then the Agame and the Siguene, and, having conquered, I reserved for myself half of their lands and their peoples. The Aua and Singabene and Aggabe and Tiamaa and Athagaous and Kalaa and the Samene people who live beyond the Nile in inaccessible mountains covered with snow where tempests and cold are continuous and the snow so deep that a man sinks up to the knees, I reduced to submission after having crossed the river; then the Lasine, and Zaa and Gabala, who inhabit very steep mountains where hot springs rise and flow; and the Atalmo and the Beja and all the people who erect their tents with them. Having defeated the Taggaiton who dwell up to the frontiers of Egypt I had a road constructed going from the lands of my empire to Egypt.

Then I fought the Annine and the Metine who live on precipitous mountains as well as the people of Sesea. They took refuge on an inaccessible peak, but I besieged them on all sides and captured them, and chose among them young men and women, boys and virgins. I retained also their goods.

I defeated also the barbarian people of Rauso who live by the aromatics trade, in immense plains without water, and the Solate, whom I also defeated, imposing on them the task of guarding the sea-lanes.

After I had vanquished and conquered, in battles wherein I personally took part, all these peoples so well protected by their impenetrable mountains, I restricted myself to imposing tribute on them and voluntarily returning their lands. But most peoples submitted of their own free will and paid me tribute.

I sent an expedition by sea and land against the peoples living on the other side of the Erythraean Sea, that is the Arabitas and the Kinaidokolpitas, and after subjugating their kings I commanded them to pay me tribute and charged them with guaranteeing the security of communications on land and sea. I conducted war from Leuke Kome to the land of the Sabaeans.

I am the first and only of the kings my predecessors to have subdued all these peoples by the grace given me by my mighty god Ares, who also engendered me. It is through him that I have submitted to my power all the peoples neighbouring my empire, in the east to the Land of Aromatics, to the west to the land of Ethiopia and the Sasou; some I fought myself, against others I sent my armies.

When I had re-established peace in the world which is subject to me I came to Adulis to sacrifice for the safety of those who navigate on the sea, to Zeus, Ares and Poseidon. After uniting and reassembling my armies I set up here this throne and consecrated it to Ares, in the twenty-seventh year of my reign.

The 8th to 10th century manuscripts in which this inscription is preserved have some explanatory glosses about some of these names; thus Gaze apparently means the Aksumites, still called Agaze, the Siguene are the Suskinitai, the tribes near Adulis are called the Tigretes (the earliest mention of Tigray?), the Tiamaa are the Tziamo and Gambela, the Atalmo and Beja are the Blemmyes, the Taggaitai (Tangaitai) are also called Attabite.. and Adra..s, the Sesea are tribes of Barbaria, the Solate are those living by the sea in Barbaria, called the Tigretai of the coast in Barbaria, and Sasou is the furthest part of Ethiopia, beyond which lies the ocean and the Barbareotes who traffic in incense (Huntingford 1989: 43)”. [4]

As one can easily discern from these military campaigns by the Adulite King, the campaigns had taken over and spanned from the Semien mountains to deserts and areas below sea level. The diversity of the territories subdued or brought under the Kings control is well illustrated in this monument of Adulis or Monumentum Adulitanum. Many a scholar of the Horn region assumes that this Adulite king was non other than the Axumite King Ezana. But, to my eyes, that is senselessly and preposterously absurd because the anonymous Adulite king was intrinsically ‘Adulisian’ as Ezana was inherently ‘Axumite’.

A herculean task awaits those who may take upon the responsibility of liberating  the Erythraean historiography from the perniciously insidious Abyssinian paradigm. Many a Eritrean mind would never bedecolonized from the surreptitiously stealthy Abyssinian narratives until ‘The Adulisian Paradigm’ is brought to the fore of the Eritrean national discourse and de-mythologizing these deep-rooted myths starts in earnest.

As a parting shot, I knew a person in the city I was born and grew up, named Adulis. He lived with his family close to our houses, in the same neighborhood. I have wondered even when I was very young why he was named thusly. Through my paternal grandmother, I found out that his parents hail from that part of Eritrea and how Adulis was such an important port  based on the oral stories she used to hear from her parents/grandparents a long time ago.