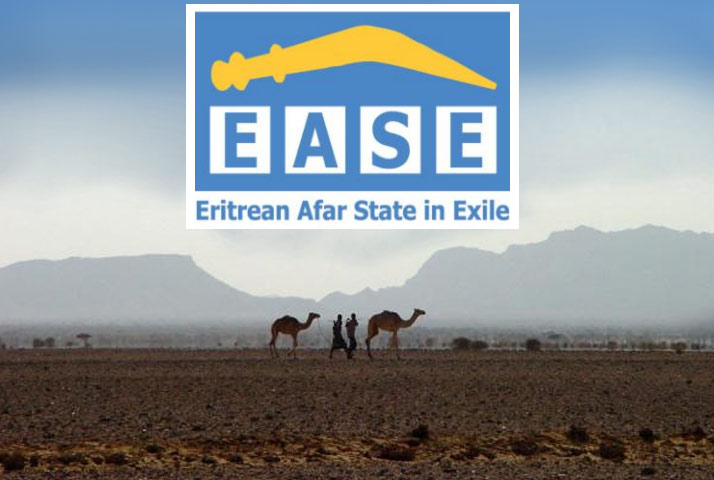 In a statement issued yesterday March 20, 2017 in Ottawa, Canada, the Eritrean Afar State in Exile (EASE) accused the Eritrean government of implementing “systemic policies to displace the Afar Eritreans from resources rich and strategic coast on the red sea”.

On March 14th, the Eritrean government television announced it will settle the victims of the 2011 volcanic eruption of Mt. Nabro in Dankalia, southeastern Eritrea. EASE characterized the government’s move as “Land Grab and Displace for the benefit of the regime.”

The Nabro volcano which is located on the Great Rift Valley, was believed to be dormant until its eruption in 2011 with a magnitude that measured 5.7 on the Richter scale, and became a health hazard “to thousands of Afar residences in Biru, Afambo and parts of Danakil depression.”

The volcano had released thick smoke and gases that clouded the region causing international airlines to cancel or change flight courses.

The EASE statement said that the Eritrean government ignored the risk caused by the volcano while in “neighboring Ethiopia, the government launched an appeal for international foreign aid… [and] confirmed the death of 31 people.” According to EASE, the Ethiopian government stated that 48,000 people were exposed to immediate danger and 167,000 more faced health risks due to toxic gases and ash falls.

The Eritrean government never released details of the causalities of the volcano eruption that caused the deaths of many people and loss of animals, mainly due to lack of, or contamination of water in the region, though some of the victims were forcibly settled in the vicinity of Alale desert, Wade, and Mogorasu, areas which have acute water shortage.
The “government deliberately prevented foreign aid from coming to the country in order to hide the magnitude” of the eruption.

The Afar people of the region are “predominately nomadic pastorals have lived in this harsh environment, many centuries before the formation of the current State of Eritrea… and have lived in [the] region through natural disasters, environmental catastrophes, famine, regime changes and wars.”

The region is one of the hottest places on earth and in some areas the temperature could reach up to around 104 degrees Fahrenheit, and its lowest point is over 200 feet below sea level.

EASE stated that the “Eritrean regime is exasperating an already dire situation by disrupting the Afar way of life by severe restrictions and threatening their socio-economic lifeline by selling off their strategic resources which are all critical for their survival as indigenous people.”

It added, “the systematic policies of displacement to grab Afar lands and resources by the regime are enforced with violence such as mass murder, rape and terror in order to remove the Afar from their ancestral homeland in (Dankalia) and to colonize the area … which contains a vast amount of natural resources, including large deposits of potash, various precious metals and strategic coastlines and ports.”

The Eritrean Afar State in Exile (EASE) is an exiled Eritrean Afar political organization dedicated to self-determination and self-rule of Eritrean Afar people in their coastal homeland of Dankalia, Eritrea. It believes the indigenous Afar are subjected to marginalization, persecution and ethnic cleansing at the hands of the current Eritrean government. EASE describes itself as the voice of the Eritrean Afar people, and draws its mandate from the political and traditional Afar leaders, the leadership of Afar women and youth groups, the Eritrea Afar Diaspora, and Eritrean-Afar refugees.