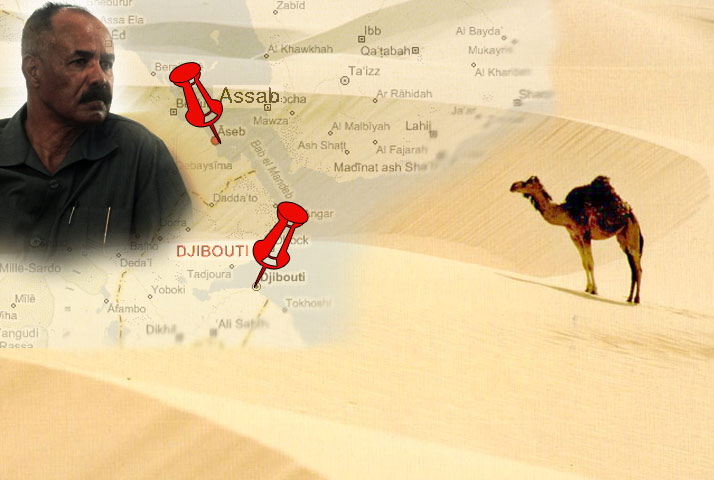 Today’s edition of Negarit consists of an extended part from a June 3, 2011 article, “Unusual: Imagining Asseb Through Djibouti”, and a chapter from an article, “Could we be heading to Assab?”, dated June 21, 2011.

My flight from Djibouti to Addis had to do a stopover at Dire Dawa (Dire Daba as the Somalis call it.) The pilot kept flying around the city for a long time in high altitude. Finally, he announced the reason: “bad weather conditions, we are trying to approach the runway from a different direction.” Then he headed towards what seemed to me north east, and Asseb I guessed Assab is only half an hour or less in that direction. I fished the flight magazine to check the map: Assab is close. Even if he went to Assab, there would be no one at the dead airport; I imagined you could land and take off before anyone came from the AlShabab training camp at Kiloma, or somewhere around there. I was in the middle of my imagination when the pilot decided to fly to Addis because the fuel was running out… now I had to console a man sitting beside me. A few minutes ago he was happy he was close to his home, Dire Dawa, now he had to fly to Addis and will have to fly back to Dire Dawa the next day. It was already too late; and there are no night flights to Dire Dawa and he had to wait for the next day. I arrived safely, albeit late, at Bole airport, Addis Ababa.

The Unusual Damage to Asseb

Over ten years ago when Meles Zenawi said, ‘Asseb will be a watering hole for camels’, or something close to that, I was so mad at the remark, but I never imagined it will be so true. Now, even the camels cannot water in Asseb. Yemane Baria’s immortal song wedebat Adey once reminded us that the most important possession we have is our ports. Asseb and Massawa are the two ports that made us feel so proud, wealthy and so important; we dreamed of optimizing them to generate more income for the prosperity of the country.

It has been thirteen years now since the income from Asseb became zero dollars yearly. Worse, Eritreans are not even enraged enough. And any Eritrean worth his salt, specially the PFDJ lot, repeat the mantra that “Ethiopians want to retake Asseb.” I admit, there are a few Wedi Assebs who would like to retake it, they are nostalgic of the bars and masterly life they had there, but their numbers are dwindling fast. But let’s think like Eritreans, sovereign Eritreans, intelligent sovereigns not the ignorant type.

We all knew a corner shop where we got our small groceries—sugar, tea, coffee, sweets, oil, etc. I am sure we all remember how the shopkeepers treat their neighborhood clients with respect because they know they are their customers from whom they collect cents to make a living, sometimes they accumulate wealth from the cents. What would you call a shopkeeper who irritates the neighborhood women, annoys the men and scares the children? He is simply a person who doesn’t know how to conduct business and will soon go bankrupt or leave the neighborhood. It is insane to be on a perpetual enmity with your main customer.

Ethiopia has eighty million customers who need that service, and they are not using it. For thirteen years, we have watched the port become insignificant by the day, and we are not even stopping to ask a simple question: who is to blame for all that ruin to the Eritrean economy? Ethiopia? All right, they seem to have declared that they will strangulate Eritrea economically until the state of war between the two countries is resolved. But what are we doing to reuse Asseb? Is that even in the priority list of the good-for-nothing pseudo opposition who are never tired of issuing political programs and economic visions copied from dusty templates of the sixties and seventies of the last century?

The PFDJ lots are worse—they never see the economic war that Eritrea is losing, because it doesn’t effect Isaias and his clique, it just ruins the livelihood of the common citizen. When there is a movement of troops on the Ethiopian side, they scream from the bottom of their lungs because that kind of threat will touch them personally. See! They only prepare themselves for bloody wars because they have a stake there; economic war and strangulation doesn’t hurt them personally and they are fine with it—they can manage to survive on the resources of the state which Isaias and his minions control and share.

I was in Djibouti, and I made it my task to know what is happening to Asseb by checking what is happening to Djibouti. I went to the container yard, the bulk cargo facilities: storage, packing and shipping. I wanted to estimate the number of containers in the yard: I counted four containers high, a hundred or so containers in width, then I wanted to multiply it by the length in container units, to arrive at a correct estimation. I gave up; you don’t want to walk a kilometer in a place where the Sun lives. Let’s just say there were thousands of containers. The vehicle receiving yard was equally depressing for me; not that I am not happy for Djibouti, God giveth and He taketh, but I was depressed at how the Eritrean dictator is lost in knowing the damage he has inflicted on Eritrea by marginalizing Asseb from playing its role in the economies of the region.

For Asseb to make any significance as a source of revenue for Eritrea, it has to sell its services to its neighborhood customers. Djibouti doesn’t need that service, Sudan doesn’t. Somalia, Yemen, Saudi Arabia and anyone and his stepfather doesn’t need that service. Ethiopia does and it is not buying that service. Now think what that does to the employment opportunities of the residents of that area and figure it out! Or better, check Google Earth by following these coordinates: 13 degrees 00’12.80” N and 44 degrees 42’44.52.13”E. Check Asseb port. You only see deserted, sad empty berths; Isaias lords over a port without ships—isn’t that outrageous!

From the port of Djibouti I went to a town called Bilbila, a suburb of Djibouti. It is a truck stop: a place where Ethiopian truckers stop to eat, entertain, sleep and repair their trucks, check tires and everything in between. Across the main road, there is a field so big it doesn’t have a horizon. And it was full of hundreds of Ethiopian trucks parked there either on their way to load from the port, or already loaded and heading for Ethiopia. Biblila has grown so much that the Djiboutian government has embarked on a huge development drive including public and service projects—a far cry from the shanty-town-look it presently has.

That is when I really felt the betrayal of the Eritrean ruling regime so much. Indeed, the regime has not only betrayed Eritreans, it is not aware of the damage and considers its management of the country exemplary. Isaias and his inner circle can survive; in fact, even flourish on the 2% and other embezzlements on which they live. Thanks to the Dergue, the entire villas of Eritrea now belong to Isaias and his narrow clique, and their defense of the regime is to defend the perks and benefits they gained from its existence. At least ten thousand jobs lost in Asseb, for thirteen years, and not so many Eritreans are enraged! Billions of dollars’ worth of revenue is lost forever from Eritrea and not many seem to care! Didn’t Asseb control a big chunk of the Ethiopian business before that business was taken over by Djibouti? But being the stingy, Hasad, institution that the PFDJ is, it had no qualms in losing tens of thousands of lives to the war; losing tens of thousands of its youth who become refugees; tens of thousands of its people wasting their time in forced labor; and disintegrating the Eritrean family unit; and ruining the economy of Eritrea—and no qualms!

What I noticed in Djibouti is quite telling: the authorities there are so cautious to the extent that one would wrongly take them for cowards. Everyone knows, even if Djibouti would not be able to defend itself, it has enough presence of French and American power that would protect it. Yet, every time I tried to initiate a serious discussion with the Djiboutians, they would change the subject and avoid talking about the Eritrean government. They would repeat one explanation: we are a small country, and we do not want to disrupt our development projects, we do not want confrontations or excuses for one. Of course, I could read between the lines: they are very carful not to provoke the trigger-happy Isaias and his regime. They consider him a crazy person that you would avoid his path lest he gets into fits and start a fight in the middle of his breakfast, or whatever he is doing at the time. The Djiboutians are doing it with excellence and smart statesmanship. That little place called Djibouti is booming and it seems there is no stopping to it.

I talked to Mohammed Wersama Raggi, the candidate who ran against the incumbent president Ismail Guelleh. ‘Kemey Aleka?’ Wersama said in Tigrgna to flatter me. I asked him a few questions to gauge his tone and spirit; I didn’t see any blabber but a mature and established politician. And he reaped 21% of the votes, a phenomenal percentage by international standards let alone African ones. And he immediately conceded when he lost. That was another thing that made me jealous of Djibouti.

A chat with the always smiling PM of Djibouti, Deleita Mohammed, also gave me that same impression, these are people straddling borders: the brotherly Somalis to the South and East, Ethiopians to the South, Eritreans to the West and Yemenis to the North—and by God they have people from all those countries represented in the social, business, and culture of Djibouti. Why not, even the French have a strong cultural presence, French is the de-facto language—and they are very confident of themselves and what they are doing to their country, without arrogance of pomposity.

All the politicians talk about citizens as a member of a family talks about his parents, his children, or his home. No serious complaint from the people, no fear and so confident and humble—I didn’t see any sign of arrogance or snob, all the way to the top leadership. What I saw was a Bedouin simplicity and perseverance, and of course, port city ambitions. I loved them, and now I can say Djiboutians are simply beautiful and lovable people; and they are great hosts.