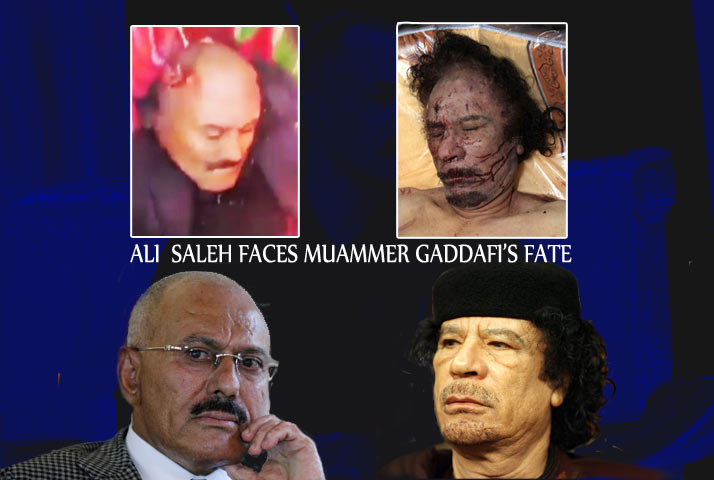 Two days after he disowned his Houthi allies in a television interview, and calling on Saudi Arabia to end its hostilities in Yemen, armed Houthis stopped his convoy south of Sanaa and shot him in the head. Yemeni sources indicated he was on his way to being smuggled out of the country by UAE forces.

Ali Abdullah Saleh, the seventy-year-old general who ruled Yemen for thirty-three years, faced a similar fate to that of Gaddafi, who once conspired to overthrow him, but failed.

In 2011, as the Arab Spring erupted in Tunisia and Egypt, the Yemenis started their own spring to end the iron-fist rule of Ali Abdullah Saleh.

In June 2011, an attempt on Ali Saleh’s life filed. He survived a bomb blast at a mosque in the compound of the presidential palace and he escaped with injuries and severe burns to his hands and face. Saudi Arabia airlifted him out of Sanaa and he was treated in a Saudi military hospital.

In a short-lived agreement, in 2012, Ali transferred power to his deputy, Abdrabbuh Mansour Hadi, but the latter failed to gain control of the country because forces loyal to Ali Saleh overwhelmed the national army and became the major force. An attempt on the life of Ali Abdullah Saleh failed

By 2014, the Houthi rebellion that was lurking under the surface gained a new impetus after it allied itself with forces loyal to Ali Saleh and controlled the port of Hodeidah. By December of the same year, they stormed the military camps and controlled a large chunk of the country.

Between January and March 2015, the Houthis controlled of the presidential palace and Aden, on the South of Yemen. In the same month, Saudi Arabia assembled an alliance of nine countries, some real others nominal, and started bombing Yemen in a major military campaign.

Ali Abdulla Saleh’s life finally ended today, and his body was carried in a Houthis rebel’s blanket and thrown on the back of a pickup truck.