An Initiative To Form An Eritrean Muslim Council 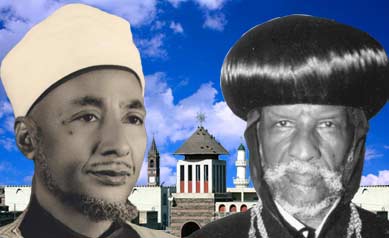 Gedab News learned that a  group of Eritrean sheikhs and scholars are in a three-day conference in Turkey; they are expected to form an Eritrean Muslim Council. Many Eritrean Muslims do not recognize the Dar Al Iftaa that was assembled by the Eritrean ruling party and which is headed by Sheikh Alamin who was appointed by the PFDJ regime.

Traditionally, the Eritrean Muslim Mufti was elected by the congregations of the mosque based on a Muslim consensus. The last formal Eritrean Grand Mufti was the late Mufti Ibrahim AlMukhtar who died in 1969.

The Abun was enthroned on March 2004 as the Patriarch of Orthodox Tewahedo Church of Eritrea in a ceremony presided by Pope Shenouda III,  the pope of the Coptic Orthodox Church of Egypt.

The other Eritrean churches also  do not fare any better; the Catholic Church had its publication stopped and some religious sects are denied any government service rights due to their conscientious objection to carry arms or get involved in political affairs. Many are languishing in unknown prison locations.

Eritrea is mainly composed of Christians and Muslims. Christianity entered the region in the third century AD while Islam entered it while the Prophet of Islam was still being chased out of his birthplace, Mecca.

There are great expectations among Muslims to see the creation of the Council succeed hoping that it will attend to their religious matters and provide them with spiritual guidance. An Eritrean elder told Gedab News, “The absence of such guidance has resulted in the fragmentations of Muslims and weakened their resolve; the vacuum is exposing our youth to the risks of religious fanaticism.”

A handful of Eritrean-European Muslims have fallen prey to fanatic forces like ISIS.

Several people contacted by Gedab News had cautious views about the Turkey meeting. Most of them expressed fear that it might dwell and reflect inter-Muslim sectarian issue of jurisprudence while at the same time hoped the council adopts a moderate, uniting outlook similar to the one that Eritrean Muslims had under the leadership of the late Mufti Ibrahim Mukhtar.

In recent years, Turkey has taken the lead in reviving and promoting the forward looking traditional Islam. The meeting in Turkey is expected to issue a press release.