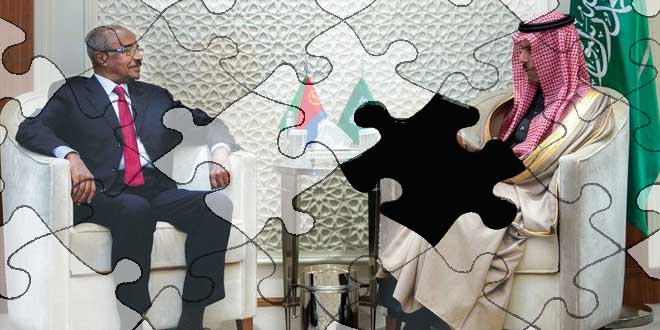 Updated with a copy of the embassy memo

Gedab News received an alleged copy of a memo that the Saudi Ambassador to Khartoum sent to Adil Al-Jubair, the Saudi Minister of state at the foreign ministry. The memo implicates the Eritrean government in the unrest in Eastern Sudan and of financing politicians to “confuse the case” by inciting civil strife in the region.

The memo alleges that Musa Mohammed Musa, a Sudanese opposition politician, is the front man of the Eritrean regime entrusted with creating wedges among the region’s tribes.

A Saudi diplomat who didn’t want to be named told our source, “the memo is fabricated by amateurs trying to create a rift between Saudi Arabia and the UAE.”

The Saudi ambassador’s memo dated March 7, 2020, refers to Eritrean refugees as being tools in the above-mentioned mission. Usually, the Sudanese and Eritrean governments mention the Eritrean refugees as a scarecrow to agitate Sudanese nativist sentiments. And since the end of last year, the UAE is building its presence in the political scene of the region and creating a leverage by expanding its contacts with several players in the region; it’s planning to penetrate the Eritrean opposition organizations. Qatar which had strong relation with both the Sudanese and Eritrean governments has almost disappeared from the scene.

Gedab News learned the so-called “Mutual interest’ centered around the memo the Saudi ambassador to Khartoum sent to the Saudi Foreign Ministry.

The Eritrean ruling party periodically trains and sponsors some Eastern Sudan opposition forces for exerting pressure on the Sudanese government. It uses its Sudanese allies as a leverage against the Sudanese central government. It also has an upper hand in the region since its smuggling and intelligence operatives have a large presence in Eastern Sudan. The victims of the clandestine operations and intelligence activities are the Eritrean refugees who belong to tribes that straddle the Sudanese-Eritrean border area.

The Eritrean government, Ethiopia, Saudi Arabia, Egypt, and the UAE are involved in the inter-Sudan conflicts in varying degrees. However, since the beginning of 2020, the UAE is visibly involved in a pilot intelligence operation in Eastern Sudan.

Below is the English translation of the Saudi embassy memo/telegram

Minister of state at the Ministry of Foreign Affairs

I’m informing your gracious highness that I have found out information from different sources that the Eritrean regime is paying large amounts of money to complicate the political situation [in Eastern Sudan] and pushing for chaos and it has allocated US$10 million dollars for this purpose. Musa Mohammed Ahmed, the leader of the Eastern Front who has close ties with the Eritrean regime is handling the plan. And now [Musa] is working to support the protests and to create discord among the components of Eastern Sudan. He is directly inciting violence and rebellion by stating that specific tribes are now controlling Eastern Sudan though they are refugees from the neighboring state of Eritrea, as per his claim. However, the reality is that he is agitating the conflicts between the tribes and creating chaos with the aim of nullifying the Eastern Sudan Agreement that was signed in Juba on February 21, 2020 between the Government of Sudan and the Revolutionary Front. And that  means an end to the Asmara Agreement of which Musa Mohammed Ahmed and the Eastern Front are signatories and beneficiaries. These events are running in coordination with the Forces of Freedom and Change, Kassala Branch, in addition to the local committees and affiliates of the old system from different departments in the three regions.

The Embassy in Khartoum
Signed and sealed 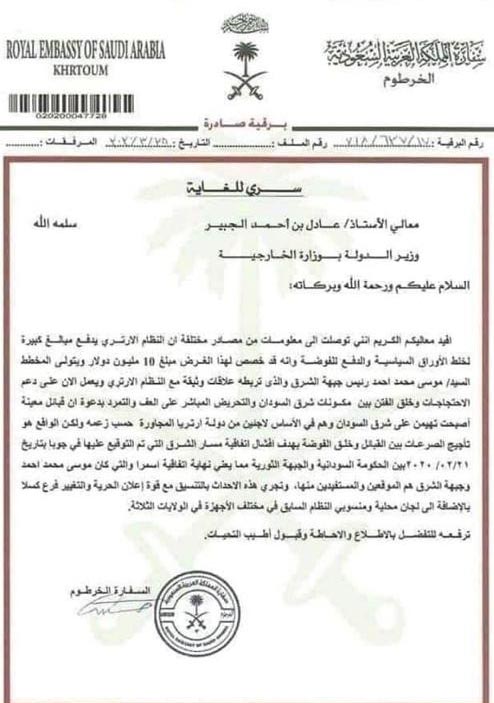